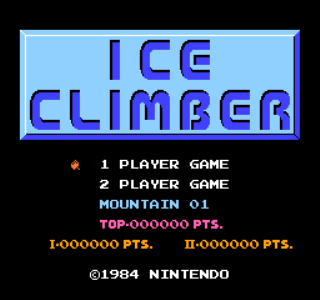 It's not often that one system dominates a territory like the NES dominated the US. At its peak, its market share was almost total and there were hundreds of games for lucky American gamers to choose from. One of the first they were able to get their hands on was Ice Climber. Released alongside the NES there, it's a fairly simple platform game which plays a little like a cross between the original Mario Bros and Kid Icarus (which came later, of course) and features two of Nintendo's earliest characters - a pair of Eskimos called Popo (a boy) and Nana (a girl) - both of whom will probably be more well known these days for their appearance in the Super Smash Bros series. Ice Climber marks their first appearance though and, as you may have guessed, also means it's a two-player game. Controlling Popo (or both of them with a friend), it's your job to reach the top of each vertical stage to, amusingly, recover vegetables stolen by a wretched giant Condor! 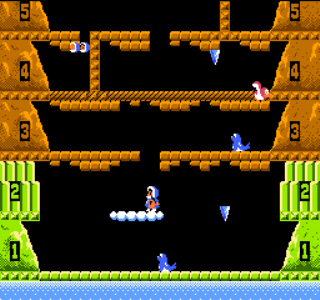 There are thirty-two 'mountains' to conquer altogether and you can select any of them from the title screen. As you might imagine, however, they get progressively harder to scale so it might be best to start from the first one! Each is divided into eight vertical levels, or 'floors', which Popo must climb to reach the top. Most of these are iced over so he has to break through the one directly above by jumping up into it to break some small tiles and create a hole. He can jump pretty high but it's sometimes necessary to make use of the cloud-like moving platforms to access higher levels. These come in various sizes and move at different speeds, getting increasingly smaller and faster as you progress, so mastering Popo's jump is the key to defeating the later mountains. Above the eighth floor and comprising the 'peak' of the mountain is a bonus area where you finally get the chance to reclaim some of your stolen veggies, as well as gain lots of points in the process! 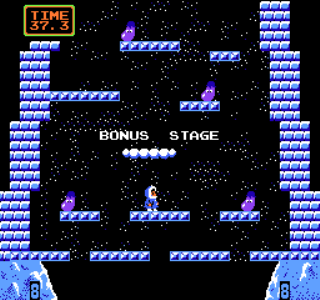 You may not even manage to gather enough vegetables to make a stew though as the Condor has apparently employed the services of some local wildlife. Trying to stop you from reaching the top of each stage are three different types of enemy. The first and most numerous are called Topi. In the Japanese version of the game, these take the form of seals, but in the Western versions they appear as yetis. Regardless of their form, at least one Topi can usually be found on each platform, and they have the ability to patch any holes in the ice with icicles. The second enemy you'll meet is called the Nitpicker. This small bird-like creature is not restricted to a platform and can fly freely around each stage. Along with the Topi, they can also kill Popo and Lala with a single touch, but our adventurous Eskimo's are each armed with a wooden mallet with which to smack the harmful animals out of the way. 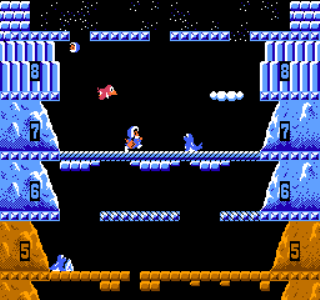 The animals soon return though, and make scaling these mountains a tricky proposition. Luckily there's no time limit, strictly speaking (although you'll only get forty seconds to clear each bonus section), but if you take too long you'll be introduced to the third and final enemy - the polar bear - who will stomp the ice and move the stage up. If you drop off the bottom of the screen you'll lose a life. This is true of mistimed jumps as well, and it's this which causes the game its biggest problem. As well as the vertical nature of the stages, the moving cloud platforms, and falling icicles, there are also slippy patches of ice and others which cannot be broken through meaning that pixel-perfect jumping is often required. If you should miss one and fall into the previously-explored blackness, you'll lose a precious life. For a game to place so much emphasis on jumping, its controls should be exceptional, and it's here that Ice Climber falls down. 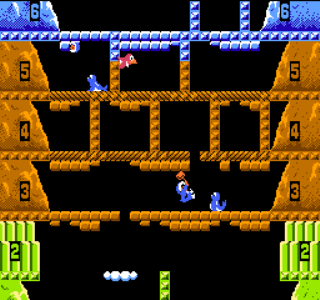 Moving Popo back and forth is fine but he has a very rigid jump and only moves a very small distance in the direction he's jumping. This means he'll either miss the platform he's aiming for or hit his head on the underside of it unless the jump is perfectly timed. This does of course result in a lot of frustrating and untimely deaths. The stages are also very repetitive, both in their appearance and style. It's the same story with the music - it's pretty good, there's just not any variety. Ice Climber is a charming little game in its own way and can be great fun, especially when played with a friend in short bursts, but platform gaming evolved a lot on the NES alone, so while Ice Climber was a good choice for a launch title, it's unfortunately not aged well and your time would probably be better invested in one of the many other platformers available for Nintendo's splendid console.