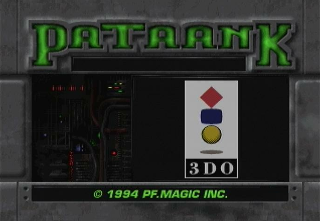 One of the great things about videogames is that they allow designers to approach existing subjects from new perspectives. This is one of the reasons why I, and many others, love the Crush series of pinball games. Naxat realised they were no longer bound by the rules of an actual pintable and so covered their tables with all manner of scary creatures and outlandish bonuses. That was one way to play around with the accepted pinball format. Another one is explored here with Pataank. Until this game came along, to the best of my knowledge all pinball videogames viewed the action either from directly above or from the same viewpoint as though playing a real pintable (even the Crush games). Pataank has other ideas - as you might have gathered from the screenshots, the chosen perspective here is not only much closer to the table than normal but actually follows the ball around! 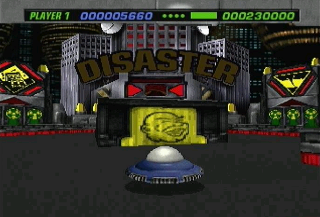 There are three main tables to explore - Surf's Up, Disaster Central, Tunnel of Luv - and they mostly include the kind of features you would expect to find on real tables including all the usual bumpers, ramps, chutes, kickers, gates, etc. The 'ball' (it's actually more like an ice-hockey puck) is equipped with magnetic grips and thrusters so you are afforded a degree of control over it and can aim it towards the various bonuses. It's a novel idea and is definitely a new approach for pinball games, one very well suited to one of the first 32-bit consoles where gamers were expecting just this kind of innovation, but it's not without its problems. At certain points the game 'camera' will zoom out but for a majority of the time, the viewpoint is very much 'up close and personal'. 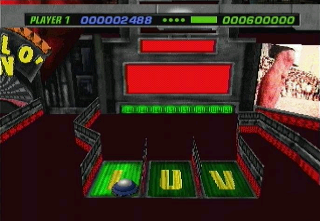 This perspective is great when zooming down tunnels or chutes but it can also prove rather confusing, and it's easy to lose your bearings when the puck starts pinging around the table. From a graphical standpoint, the console handles everything admirably. Some parts of the tables are a little bare but everything moves around quickly and smoothly. There's also small screens here and there which show table-specific FMV clips and the action is accompanied by a hyper-active sounding commentator and a catchy soundtrack. Any game that attempts something as innovative as Pataank, however, will rise or fall depending on how well executed it is, and while PF.Magic are to be applauded for trying something different, I think it may ultimately prove too confusing for some gamers. It's a good idea though, and it can be good fun. With some tweaking it could've worked well, but I'd rather get my pinball fix from Devil's Crush!