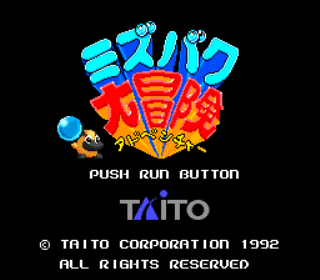 During the late 80's and early 90's there were quite a few software companies churning out games of varying quality and one of my favourites was Taito. Many of their platform games released during this time went on to achieve legendary status but for some reason Liquid Kids is one of their lesser-known titles. Perhaps it's because it follows a similar routine to so many other games from that period. Platform games certainly were at the peak of their popularity around this time but anyone dismissing it as 'just another cutesy platformer' missed out on a great game! Taking a little inspiration from some of their earlier games, Taito still managed to create another interesting adventure, and it featured a new character too. The star of the show is Hipopo, a rather squat-looking hippopotamus who's on a quest to defeat the evil Fire Devil and recover... you guessed it - his missing friends, and ultimately his girlfriend too!

This entails making his way through sixteen stages of side-scrolling platform action which are spread over seven themed 'rounds'. The first, the obligatory wooded/grassy theme, is Woody Lake which is where the Fire Devil first appeared and began wreaking havoc. Hipopo's quest to free his friends also takes in Water Land, Mechanical Industry, Pyramid, Giant Tree, Float Temple, and Demon's Castle which are all filled with lots of evil minions of the Dark Lord. They enter the stages through fiery portals which will continue to open periodically unleashing more heinous creatures. This isn't the only reason you should get a move on either - if you hang around too long, an undefeatable enemy will stalk and kill you, New Zealand Story-style! Each round also ends with a boss fight so poor old Hipopo has certainly got his work cut out for him!

Since the enemies in Liquid Kids originate from the realm of fire and many of them are fire-based or use fire to attack, the most effective means of fighting them should be obvious. Yes, that's right - wielding the power of Water Magic, Hipopo is able to see most of them off, and this is achieved by throwing water bombs at them! He has an unlimited supply of these and they can be temporarily upgraded by collecting tap icons, but there's not many other power-ups to collect - just the usual speed-ups, smart-bombs, shields, etc. Upgraded or not, the water bombs have a fairly short range when thrown but they burst when they hit something and a cascade of water will pour out which takes any enemies it touches with it. If any of the bizarre abominations is struck directly, they'll turn to ice. If you leave them alone for a few seconds, they'll thaw out and resume their nefarious deeds but if you kick them while frozen, they'll slide along the floor, taking out any enemies in their path as they go, until they hit something and smash.

This way of dealing with the enemies is rather reminiscent of Bubble Bobble and there are shades of some of Taito's other more famous platform games here too. For example, each stage is concluded by a Rainbow Islands-esque 'Goal In!' and if you're lucky you might find a certain flower with a hidden door which takes you to the next stage by way of a bonus stage with platforms shaped like a certain Tiki the Kiwi! There are other reminders of Tiki's adventure here too, notably the graphical style. Unlike that game though, Liquid Kids has much more varied backgrounds. As usual, the token grassy one that introduces you to the game is probably the most pleasant-looking, but all of the scenery is pretty nice, and the sprites are even better. Hipopo himself is a funny little fellow - I'm not sure he looks much like a hippo but he's appealing enough all the same.

The enemies are also good. I'm not sure what the hell most of them are but they're nicely detailed and very distinctive looking. Some of the animation is missing from the coin-op version, of course, as is quite a bit of backdrop detail, and some of the enemies leave less fiery carnage behind them, but most of the sprites and foreground graphics are boldy-coloured and faithfully reproduced. The numbers and locations of some enemies are a bit different too, and some stages have bits missing, but overall it's a great conversion. The music and sound effects are one of my favourite things about this game too. Well, maybe not the latter so much but the music is jolly platform game 'choons' of the highest order! It's all very cute and happy-looking which belies the game's difficulty which is up there with some of Taito's tougher platformers like New Zealand Story.

The game isn't unfairly tough though and everything here is of Taito's typical high quality, but there's something I can't quite put my finger on that separates this game from the greatness that imbues their other classics. I think it's the stage designs that don't quite 'grab me'. Most of the time they're fine but I can't help occasionally feeling that the designer cobbled them together as he went. They're far from strict left-to-right affairs though and snake up and down as well as right to left and everything in between. Liquid Kids is a great platformer but it doesn't quite have the same amount of distinctiveness or character as some of Taito's earlier offerings. Indeed, the reason for its relative obscurity could be down to Taito themselves. The likes of Bubble Bobble, New Zealand Story, Rainbow Islands, etc, set the bar so high, Liquid Kids would have to have been a hell of a game to keep up. It's good, but it's not that good.