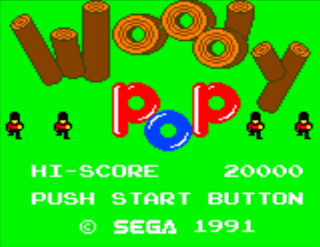 Nintendo's Game Boy was a instant success from the moment it was launched thanks to the wonders of its bundled game, Tetris, which was perfectly suited to the little white slab o' fun. When Sega released the Game Gear, it was not. Is this because it wasn't released with any games that were perfectly suited to it? In an attempt to determine this I took a look at one launch title recently, and here I'll have a look at another. Perhaps released to show up Nintendo's own bat 'n' ball game, Alleyway, which accompanied the Game Boy's launch, Sega's effort immediately demonstrated the main advantage the Gear Gear held over its rival - colour graphics! Indeed, much like Breakout, Arkanoid, and pretty much every other game of its type, Woody Pop features many different coloured bricks. Colour alone doesn't make a game though, so what else does it have to catch ones eye? 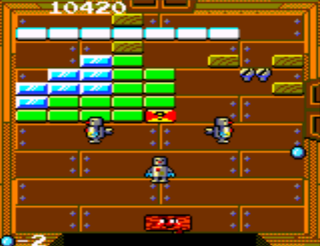 Most bat 'n' ball games have some sort of sci-fi, futuristic setting involving spaceships and invasions, etc, but Woody Pop doesn't. Instead, it's set in a toy factory called The Enchanted Mansion which is run a device called the 'Mad Machine'. Living up to its name, this machine shuts down the factory and sets up elaborate barricades in every room, blocking off the outside world. A simple wooden toy, however, takes exception to this dictatorship and strives to break his way out, and that toy is Woody Pop! I'm not sure what kind of toy he is - he just looks like a lump of wood to me - but he's certainly a courageous one, for he is faced with dozens or rooms to clear and numerous traps to outwit before the Mad Machine is defeated. 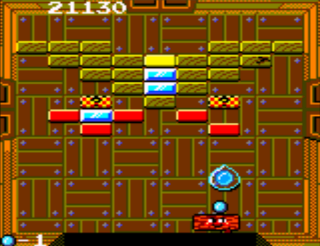 There are 52 rooms altogether and each is of course filled with lots of bricks for him to destroy with his trusty ball. However, unlike most games of this type, Woody can choose his path through the game. After successfully clearing a screen, most of the time there will be two or three choices of stage to move on to. Helping him to clear these stages are numerous collectible capsules that fall from certain destroyed blocks. While some of them have similar effects to those found in games like Arkanoid (expand bat, slow down ball, sticky bat, larger ball, etc), the effect of others sometimes depends on the material the blocks are made of. For example, one turns the ball into a fireball which is great for ploughing through wooden blocks, but be careful - it's not just some of the blocks that are made of wood! 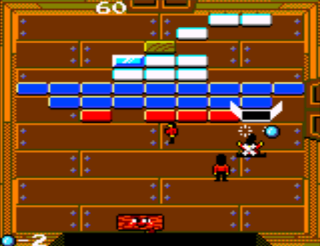 It's also worth remembering that this game takes place in a toy factory. The Mad Machine may be... well, mad, but it's got some allies. Some of the blocks actually contain toys such as small soldiers and robots which spring out like jack-in-the-boxes when struck by the ball and get in your way, deflecting the ball all over the place. Some stages have what look like mouse holes which the ball can enter (and reappear on the other side of the screen) and others are also spanned by a rail across which a train travels periodically. This also knocks the ball around and can be a right pain, as can the indestructible nails which are of course strategically-positioned to cause problems! One thing you may have noticed from the screenshots is that the void of doom at the bottom of the screen doesn't cover the whole width of the screen, so if the ball heads towards either corner, you don't even need to deflect it. Beware though - one of the less helpful capsules will remove these sections! 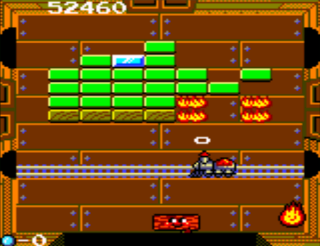 As bat 'n' ball games go, there's quite a bit to see and do here. Much like most Game Gear games, the graphics are pretty chunky and the backgrounds repetitive but things are also bold and colourful. Woody himself is surprisingly appealing for a lump of wood - watch his expressions change in different situations - and the sound is decent enough too. There's no in-game music but there's a few jolly little jingles and the sound effects are good too. It can be quite a tricky game as the ball increases in speed rather quickly, but luckily the collision-detection is rather forgiving which helps, and there's lots of stages to play through which, along with the multiple-routes, gives the game great longevity. Near enough everything here is of a decent standard which makes the game's relative obscurity strange. 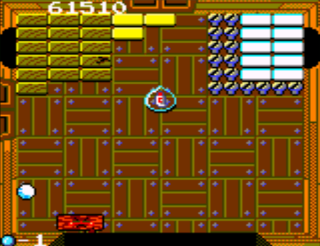 Indeed, Woody Pop is another one which had an indifferent reception from critics around its release, and it's another one where such indifference puzzles me. Perhaps a Breakout clone wasn't 'cool' enough for a fancy new handheld but as far as I'm concerned this game was ideal as a launch game and suits the portable, 'ten-minute-sessions' nature of the Game Gear just right. Perhaps it's not as addictive as Tetris (what is?), and it's not exactly the pinnacle of technical achievements, but it is one of the most enjoyable bat 'n' ball games I've played. It's bright and appealing to look at and enjoyable to play. Thanks to the harsh reviews it received, I never really gave Woody Pop the time of day in the early 90's, but I'm certainly going to now. If you like this kind of game I urge you to do the same!