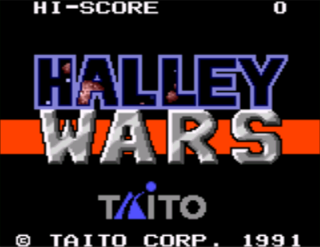 Any geeks around my age probably remember the last appearance of Halley's Comet well. It was 1986 and the arrival of this celestial wonder in our skies was met with much fanfare and merriment, and with good reason - it was quite a sight. Fast forward a few hundred years, however, and its return on this occasion brings with it a rather unwelcome surprise. The armies of the conveniently-named Lord Halley are using the famous old comet as cover to launch an attack on the free peoples of Earth! I expect that raised a smile, but unlike most shmups (near enough every one ever released, in fact) this seemingly nonsensical premise does actually serve a purpose in the game, and it's a pretty darn good idea too! 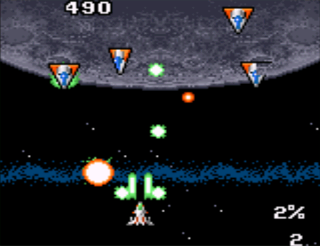 The game begins immediately after your ship leaves Earth's orbit with the invading fleet already close by. Your specially-designed fighter is quite literally all that stands between them and our fragile blue world and in the case of this game it's doubly important that you take out as many as possible - any enemy vessel that gets past you unscathed makes it back to Earth, causing some damage in the process. To this end, there is a 'damage-meter' in the corner of the screen which gradually fills up as objects advance beyond your position. It is of course game over if the armies of Lord Halley destroy your ships and you run out of lives, but your mission will also be over if the level of damage on Earth reaches 100%. The percentage is decreased at the end of the stage by increments related to your score, but it can soon climb again on the next stage so it's vital to destroy as many enemies as you can. 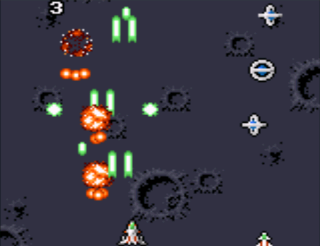 Enemies vessels consist of the usual small fighters with the odd larger, more powerful craft too. Some later sections feature guns emplacements too but the enemy has also managed to send lots of smaller comets in Earth's direction too. These, if undestroyed, cause significantly more damage to the Earth than enemy fighters do, so it's even more important to take them out. To help you do this, your little ship has a basic forward shot. There's no other weapons, strictly speaking, but this shot can be significantly powered-up by collecting the usual icons. Other icons can be found to speed up your ship or equip it with a shield which lasts for a set number of hits, and it can also be armed with up to four drone-type devices which fire shots of their own. They are, however, fairly easily destroyed but you can jettison them voluntarily, with each acting as a smart bomb. 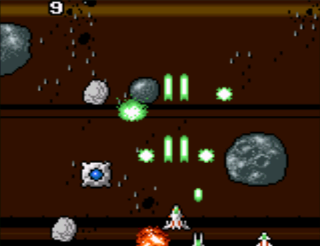 There are six stages altogether with each taking place progressively further away from the Earth. The first sees you travelling past the Moon with the next taking place over Jupiter and among the asteroid field in that region, and you'll continue right up until the final stage over the comet itself. Despite the occasional change in backdrop though, the stages are mostly space-based ones and therefore aren't particularly varied to look at. It's a similar story with the sprites, with only a handful of new ones appearing through the game. There's not often too many enemies on the screen at once either, although that's more understandable. Everything is nicely drawn and runs smoothly though and the bosses aren't bad, with the little Game Gear display handling the action admirably and with little flicker evident. 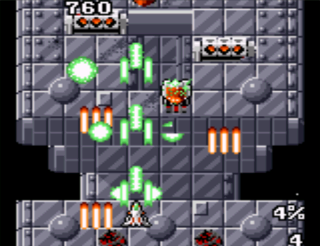 I've seen screenshots of the game before though, so I knew roughly what to expect. It was how the game played that I was most interested in, mainly due to the rather indifferent reception it received when it accompanied the Game Gear's launch here in the UK. While it's true that I've played better vertical-scrollers on the Master System, I'm not sure it's fair to judge this game by the same standards. All the action has to be larger, for starters, so players don't strain their eyes to see what they're doing. Taito may have gone a bit too far in that regard but Halley Wars is still a good-looking game, has nice music, and is very enjoyable to play as far as I'm concerned. It's quite easy as shmups go - you keep your cannon-upgrades when you die, for example - but its 'Earth damage' system is pretty neat and means you'll have to take more risks than you otherwise might, making it a better game and also giving it something to stand out. Give this oft-overlooked title a try.