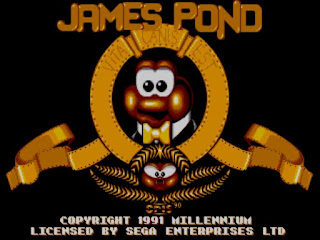 During the game mascot boom of the early 90's there was a big influx of potential new heroes for consideration by the gaming public. Many were spurred on by the huge success of Sonic but it was going on long before him too. There were lots of mostly rather implausible anthropomorphic creatures thrust into the spotlight and we ended up with a veritable Noah's Ark of odd candidates including a mouse, bat, elephant, possum, ant, squirrel, duck, bobcat, dog, bee and lord knows what else, but there's one who beat them all to the punch. And he was... a fish? Many of these odd platform hero wannabes would realistically found it difficult to clamber around the environments typical of a platform game but a fish doesn't even have limbs, nevermind the inconvenience of air in place of their more natural environment! The obvious answer would be to set the stages underwater, but would it even still be a platform game then?

Of course, it's entirely possible the character was conceived purely for the oh-so-hilarious pun on the name of James Bond, but credit where it's due - this chirpy Underwater Agent has actually had a pretty decent and original game built around him. Taking yet more inspiration from 007's adventures, the antagonist here is the evil Doctor Maybe. After taking over the megacorporation, Acme Oil Co, he has been wreaking havoc in the world's oceans by dumping radiation and toxic waste and endangering all the life that dwells within, as well as generally causing a giant mess and making a nuisance of himself. In order to save our beautiful seas, the British Secret Service turns to James Pond to clean up the mess caused by Dr Maybe and prevent him from making any more.

There are twelve missions in total which lay between our piscine hero and victory. James himself is a happy looking fellow (who sports a tuxedo with bow tie, of course) who must swim through these stages completing set tasks before he can gain access to the next. The mission objectives (which are detailed in a briefing beforehand) are many and varied but generally entail finding and collecting an item and taking it to another location. They include rescuing trapped lobsters, finding lost gold bars in a shipwreck, leading threatened seals and fish away from danger, plugging holes in a leaking oil tanker etc. Each mission has a time limit too. It's usually pretty generous but if you run out of time, one of Dr Maybe's special agents will come after you!

You'll start each mission from a 'Home Pipe' which can be entered at any time. It leads James to his home where he can stash items he's picked up for use later on. Other pipes can also be found which you must enter to finish a mission, and there is usually more than one. They are all locked to begin with but as you progress through the mission they will each become unlocked once you've completed a certain amount of your mission. This does of course mean that you won't necessarily complete the missions in numerical order, but you will have to tackle them all at some point. The stages are filled with millions of often nonsensical items to collect for bonus points such as clocks, false teeth, teddies, and near enough anything else you can think of.

More dangerously, the stages are also filled with many enemies too. A few of these are human but, curiously, most of them are fellow animals like snails, octopuses, crabs, and even other fish. There are also squids, which squirt ink at you if you touch them, turning the screen black for a few seconds, and jellyfish which are, rather unhelpfully, invisible. I don't know what Dr Maybe's done to these innocent animals to turn them against our hero. Maybe they've been brainwashed! Regardless of what form the enemies take, they are dealt with in the same way - Bubble Bobble-stylee. In other words, James can blow bubbles in which the enemies are trapped, then he can pop them to receive more bonus items. It's not really worth going out of your way to clear them though as not only do they deplete your 'Fishometer' (energy) very quickly, but they'll often regenerate as soon as you move away too. Bah, cheating sons of bitches!

Not all ocean dwellers are out to cause James such hardship however. Starfish, of which there are four types, are more helpful. Red ones give you super speed (with seven of them giving you hyper speed), yellow ones refill your Fishometer, green ones give you extra bubble power, and dark ones stick to you and drag you around (which isn't too helpful, I guess). Oysters are rather useful too. Collecting one will see it follow you around and neutralize the next eight enemies it comes into contact with. There are lots of other items lying around the seabed as well. Fairy Wands are a type of temporary invincibility shield, Potions make all the enemies on the screen disappear, Hearts give you an extra life, Top Hats act as armour, Goldfish Bowls extend the amount of time you can spend out of the water, Shades allow you to spot the otherwise invisible Jellyfish, and the Ray Gun offers more efficient enemy destruction.

Others items are less helpful. Bombs, for example, explode as soon as you touch them, Skull Potions will make all the enemies on the screen extra nasty, bottles of Cod Liver Oil make you dizzy and hard to control for a short while, and Glue Pots stick you to wherever you're standing. All but the first mission are comprised of several sections. You can travel between them at will but it does make for some fairly large stages. To help you get around them more quickly some stages feature mushrooms which teleport you to another mushroom on a different part of the level. James is not equipped to survive above sea-level but he is able to jump out of the water for short periods, and occasionally a mushroom may transport him to a location on land so he must act quickly to avoid 'drowning'.

There are also numerous secret rooms on each stage which are entered by going through small holes in the seabed and walls. There are three different kinds - good, neutral, and bad. If you re-enter a secret room, it will always be a bad one regardless of whether it was to begin with or not. Secret rooms invariably contain bonus items for points but can give you some special items too. Hurry though, your Fishometer will gradually fall when you're inside and the bad ones are packed with enemies too! There's a lot of enemies in James Pond too, and it does make it a pretty taxing game, especially given their self-resurrection abilities, but I'm pleased to say it's not one of those games that suddenly gets impossible either. It was originally converted to the MegaDrive from the Amiga though, so are there any differences?

As is often the case with Amiga-to-MegaDrive conversions, the most obvious difference is the number of simultaneous colours used, with this version featuring noticeably fewer colours in the backgrounds. It still looks pretty nice though and the sprites are nigh-on identical. James himself is an appealing chap and the other characters are nicely detailed too. I'm particularly fond of the dippy-looking fish you have to guide to safety on the second mission! The sound is also of a high-standard with lots of great effects and some fantastic upbeat and jolly music, especially the second mission once again - I guess that must be my favourite stage! The presentation is impressive throughout which is helped by the great atmosphere the game creates, thanks partly to the chortlesome Bond puns which aren't limited to the main character - the game frequently makes Bond-like remarks and the missions are appropriately named too (e.g. A View to a Spill).

As you may have guessed by now, this first adventure of James Pond, as well as being surprisingly deep (no pun intended), is also a unique and sometimes slightly bizarre one! For one thing, it's a 'platform' game which involves very little actual platforming. The water-based setting allows for a few new ideas and these are mostly very good ones. The stages are quite large and mostly non-linear in their layout and the environmental theme of the game has renewed relevance these days. I've always been keen on mission-based games and those that comprise this one are very enjoyable to carry out. It's more than just a simple collect 'em up too - the objectives are varied and the stages can get quite complex. The difficulty curve is just right as well - every time I play it I seem to get a little further. James Pond isn't perfect and can be quite frustrating now and then, and it pushes the MegaDrive's limits in no ways, but it's very pleasant for the most part, plus it feels pretty good saving the environment and all!