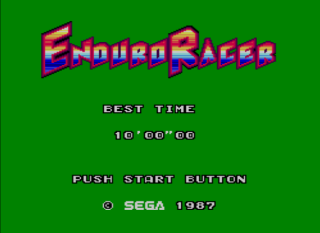 Sega sure had a fine run of arcade hits in the mid-80's and perhaps the most popular of them were their 'Super Scaler' faux-3D games. This advanced technology was ideal for making racing games and many of those that appeared are now looked back on as classics, but one of them has seemingly been forgotten about. Poor old Enduro Racer isn't spoken about with such reverence as Hang On or OutRun nowadays, it's hardly spoken about at all in fact! It certainly isn't from a lack of availibility - it was converted to most home systems of the time, and fairly accurately too for the most part. One, however, saw a significant change, and ironically it was the one for Sega's own console... 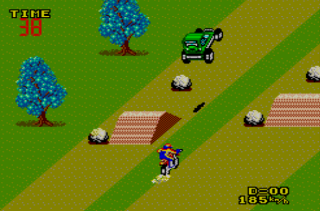 Yes, that's right - for some reason Sega opted to perform a surgical procedure on the Master System version of their arcade hit which resulted in a rather different game. As you've probably noticed, the into-the-screen racing action of the arcade game is largely the same here but the viewpoint has been shifted to a 3D-isometric one. This does little as far as the premise is concerned - you're still in control of a motocross-style bike and the object of the game remains to race it as fast as possible through the courses. If you reach the end of a course before the time limit expires, you'll qualify to race on the next. Where the change in viewpoint has had an effect is on the courses themselves. As before they are all strewn with obstacles and hazards to impede your progress but here they are all flat and straight. 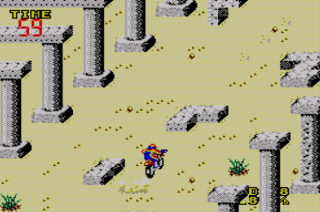 Due to the lack of corners and hills, the amount of hazards on each course has been increased here to compensate. As well as lots of ramps, the type of hazards generally include things like rocks and plants, but they are often unique to each course too. For example, the second course is set amidst ancient ruins, the fourth is partially flooded, and the fifth takes place on a crumbling mountain-side road! Each course also features other racers as well. There are a mixture of car and bike-based opponents but there are no race positions up for grabs. Instead, you'll earn a point for each racer you pass. These points can then be 'spent' at the end of the race improving various aspects of your bike like acceleration, tyres, engine, suspension, etc. 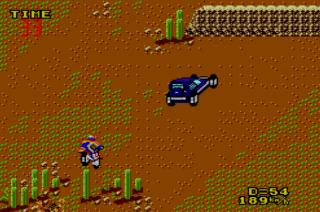 There are ten courses altogether, compared to the five of the arcade version, but lucky owners of the Japanese 'Mark III' console benefited from this a lot more than most of us. In the rest of the world, you see, the MS version of Enduro Racer had five unique courses which were repeated to total ten courses. Further tinkering by Sega, however, meant that Japanese gamers were treated to a 2Mbit cartridge, rather than the 1Mbit one Europe and the US saw, which resulted in the Japanese game having ten different courses, including a snow and desert stage. Bah! As well as a couple of other minor changes, such as the title screen, these additional courses afforded by this extra space is enough to make it worth trying to obtain the Mark III version, for fans at least! 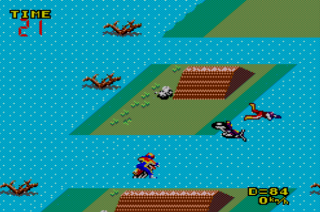 I'm still not sure why Sega did it. It's not like the MS couldn't have handled a proper arcade conversion. Hell, even the humble Speccy managed a reasonably faithful conversion! Perhaps it was supposed to be their answer to Nintendo's Excitebike, but they could've tried both kinds of game, surely? Oh well, it doesn't matter now I guess, and fortunately the end result is an enjoyable and addictive, not to mention unique, racing game anyway. It looks and sounds pretty nice too, with some great backgrounds, smooth scrolling, and decent music, and the variety between the courses is nice (for Japanese gamers, at least!). The action can get pretty fast and challenging but with some practise you shouldn't have too much trouble seeing the later stages, and refreshingly the other racers make mistakes too! Once you discover the charms of this curious little game, it's the kind that you'll stick on 'just for ten minutes' and find yourself still playing two hours later! Give this forgotten classic a bash and you'll see what I mean...