My previous Top Five Shmups features have so far been for systems I'm very familiar with and have used a lot over the years. Accordingly, I've compiled the lists based on my previous experiences with the systems in question, although with a view to re-doing them at a later date if any previously-unplayed games are discovered which deserve inclusion. As regular readers will know, however, I do not have much experience with the NES. In fact, before starting this feature, I'd never played a shoot 'em up on the old grey toaster. I've therefore had to start from the beginning and try out lots of shmups to find the best ones. I'm sure I missed a few good ones but here's what I found: 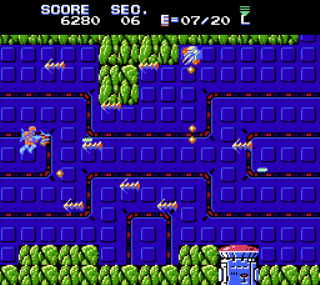 I have distinct memories of this one being released to rather indifferent reviews at the time but I rather like it. It immediately reminded of Side Arms, and the two Capcom games do share a few features - both feature a flying spaceman holding a big gun which he can shoot forwards and backwards for example, but I found that this effort, which is actually the older of the two, has a few nice features that weren't carried over to the more famous game. For one thing it's made up of sixty stages! Admittedly they're pretty short ones but each ends at a transporter which lets you choose one of two next stages. Not all stages need to be cleared and some transporters will take you back to a stage you've already played but it's a great idea as it gives multiple routes through the game. Most other aspects of the game are good, if unspectacular, but I had a lot of fun with this one. 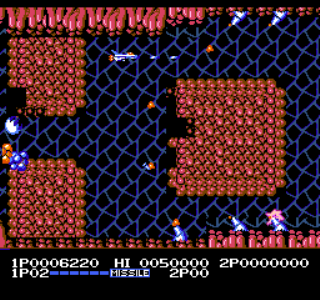 I also remember the reception that this game received around the time of its release and, unlike Section Z, they were far from indifferent! Earning rave reviews across the board, Life Force is one of the NES games I've wanted to play for a long time, especially given my love of its prequel, Gradius. It seems those reviewers were right on the money too, this is a fantastic shooter! It's not a straight port of Salamander as some of the stages and bosses have seen some changes but it's still impressive stuff. Featuring a mixture of horizontal and vertical-scrolling stages and some new weapons, it's certainly a more varied game than its predecessor, and it's even a little more forgiving (just a little though!). The graphics and music are pretty good too and the only thing stopping it from earning a higher position is the rather trial-and-error nature of some sections. 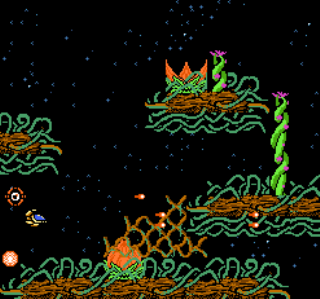 I have less vivid memories of this one but its distinctive looking first stage certainly rang a few bells. Indeed, it's graphics are superb throughout with that first stage featuring all manner of vegetation (non-lethal for the most part, luckily!) and later ones include some great-looking metallic, icy, rocky, and watery themes. Gameplay-wise it has a few tricks up its sleeve too. Your Mr Heli-like ship is small and manoeuvrable and can shoot both forwards and backwards (though not at the same time) and it's possible to customise the weapons and options set-up (that's Gradius-style options, not an options screen!). All this would be enough to make the game interesting but it's also really enjoyable to play. Enemies attack from your front and rear and many have unpredictable flight paths so there's a lot to keep you on your toes here! Great soundtrack too. Over Horizon is a fantastic and rather under-appreciated shmup (or so it seems) which I'm eager to play again! 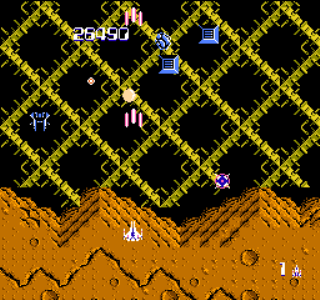 I'd never played this game on any format prior to this feature but its reputation very much proceeded it! It reminds me of the equally awesome Aleste (Power Strike) on the Master System so the praise it received wasn't ill-placed either. It's a fast-paced and addictive game to be sure, but it's also pretty flashy for its age. The story sees you attempting to infiltrate and shut down an advanced artificial-intelligence which mankind managed to bugger up or something like that, but more noteworthy is the AI of the game itself which changes the difficulty depending on the players actions! It's a great idea and makes the game a real challenge for gamers of any skill level. The graphics and music are nice too and there's a decent selection of weapon power-ups available. Overall, this is a top-notch blaster which is every bit as good as its reputation suggest, but it's not quite as good as... 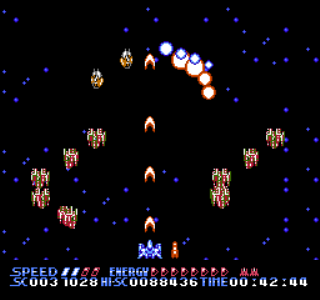 Blimey, where the hell did this one come from?! I'd never heard of it before but I don't know how! Released fairly late in the Famicom's life, Recca was apparently used in Naxat's Summer Carnival competition in 1992. I'm not really sure what that's all about but the end result is a pretty incredible shmup which it's hard to believe is even running on Nintendo's little 8-bit box of wonders at times. It's a lightning-fast vertical-scroller featuring dozens of small enemy sprites all flying round in formation at manic speeds while your little ship tries to take out as many as possible and avoid the ones it can't. The graphics might not look much from the screenshot but believe me - what it lacks in detail or flashy backgrounds it makes up for with speed and sheer numbers of sprites! The game even verges on bullet-hell levels of intensity at times, and it's all accompanied by a great soundtrack and some fantastic sound effects. Recca is one short, sharp adrenaline-rush of a game, and what a rush it is!
Posted by RetroKingSimon at 17:35