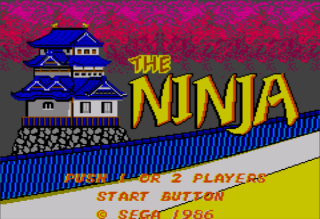 Ninjas are awesome, everyone knows that. The late 80's to early 90's saw their popularity in my part of the world peak and this naturally translated to the videogames market perfectly. There were many games based on their exploits released but most of these were side-viewed run 'n' gun style games. One of Sega's earliest offerings did things a little differently. It was similar in style to Capcom's Commando, which was released around the same time, but replaced the various soldiers with ninjas and other Japanese warriors, and like Commando was first released in the arcades. At this point the game was known as Sega Ninja but in Japan it went by the slightly more appealing name of Ninja Princess. 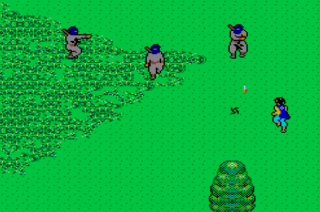 As you may have guessed from its title, the game cast you in the role of a female ninja, but for this Master System version, Sega made a few changes. As well as replacing our heroic girly with a more traditional male ninja (I guess they thought a death-dealing female would be too 'shocking' for home gamers), they also changed a few stages around and made the game a bit more serious, but the story and object of the game remained the same. Without going into all the details, the game is set in Japan's Edo era, around the year 1630, and sees you, as Kazamaru, seeking to end the oppressive reign of warlord, Gyokuro. Not only this but you also have to rescue 'the princess', presumably the star of the arcade game! 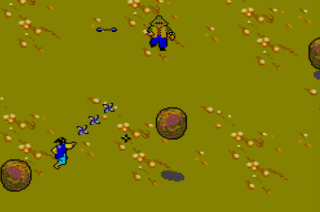 There are thirteen stages altogether, from the onset of your quest to the final confrontation, and they are all filled with lots of hostile warrior types. You'll generally start from the bottom of each stage and work your way up, encountering various ninja and samurai types as you go. Kazamaru is initially armed with an unlimited supply of throwing knives which travel pretty quickly but aren't very powerful. Certain enemies leave behind scrolls when defeated, however. The blue one acts as a speed-up while the red ones upgrade your throwing knives to full-on shurikens, each of which cuts through several enemies at a time. The last kind of scroll is the green one which doesn't seem to do anything at first. It later transpires, however, that there are five of them hidden throughout the game which must be collected to enable access to the final stage. 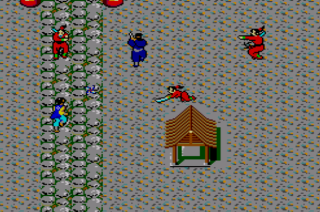 The various enemies aren't particularly varied with only a few different kinds and some slight variations but their numbers and techniques do gradually change. They will automatically run toward you from the start but their weapons seemingly get upgraded through the course of the game too. Some, such as the standard ninjas, don't hurt you just from touching you, but other enemies do, such as the ones armed with swords. Some ninjas have apparently mastered magic too. One type can turn into ravenous wolves while others can use Elven-style cloaks to disguise themselves as rocks! In either case, Kazamaru is felled by a single strike from any of them but, helpfully, you can block enemy shots by shooting them with your own. 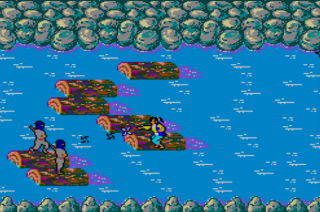 Some of the ninjas on later stages even run around you in super-fast circles firing away if you let them get too close! Mercifully, none of the enemies respawn so if you find yourself inundated, you can seek refuge in previous parts of a stage, but another option exists too - with a press of both controller buttons Kazamaru can turn himself invisible for a second, but since he's invulnerable while invisible this can be an invaluable second if timed right. Talking of the stages, they are probably the best part of the game. Many of them are up-the-screen affairs as mentioned but they are interspersed with some more creative ones. Stage two, for example, sees Kazamaru making him way up a hill dodging falling boulders as well as teleporting ninjas! 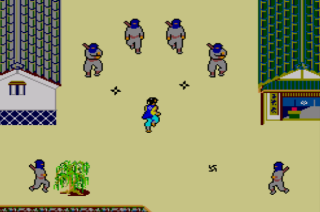 Others see him riding logs down a river, Frogger-style, while enemies attack, dodging stampeding horses and fire-breathing enemies, and he even has to climb a rock face. The up-the-screen stages are fairly varied too, taking in grasslands, courtyards, villages, temples, and other things of that nature. Regardless of the type of stage, each ends with a fight against a boss who usually have some ninja cronies hanging around too. As mentioned, you can only gain access to the final stage once you've found and collected all five green scrolls which are hidden through the game, so explore each stage carefully - the game will send you back to look for them if you missed any! 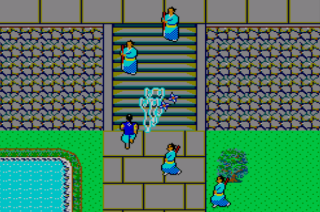 As well as being a fairly early Master System game, The Ninja was also a pretty basic one and was part of the budget range Sega later introduced. The graphics are colourful and nicely detailed, featuring surprisingly little flicker or slowdown, but the animation and variety through the game is lacking somewhat. It's the same story with the sound really. The effects and music are pretty good but they change little and can grate a bit after a while. These points don't really affects the enjoyment of playing much though, and The Ninja is indeed a very playable game. Control and collision-detection are top-notch and all the enemies always appear in the same place each time, so even though it's a pretty tricky game, practise can see good progress. To a highly-skilled player it could be rather short game (15 minutes or so) but for most gamers this will provide a good and entertaining challenge. About the only thing that would realistically make this game any better is improved enemy AI, but as it stands The Ninja is still an addictive and action-packed game which comes highly recommended.