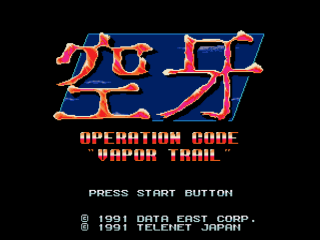 I've played a lot of MD shmups. Back in the late 80's and early 90's they were probably the genre that occupied the most of my time and the console I spent the bulk of my time on was inundated with them. I guess the subsequent content here at Red Parsley reflects that to a degree but I've noticed that I still keep getting asked why this game, simply Vapor Trail to its fans, hasn't received any attention. The simple answer to that is - it's one that I've never played... that is, until now! I've never really been overly concerned with playing it due to the rather indifferent reception it received in the magazines of the day, but it's time to look past all that and give the game its chance to impress me. Who knows, maybe I'll even have to re-work the Top Five MegaDrive Shmups list... 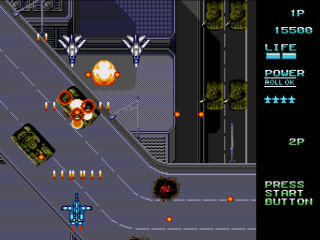 Regardless of its quality, it was lucky MegaDrive owners who were the only ones able to play this Data East coin-op outside of its arcade home too, and it's a pretty close conversion. The rather unimaginative story is your garden variety 'evil terrorists threaten the world' type affair. Specifically, a group known as DAGGER has occupied New York and taken control of nuclear missile silos. Unless the world's governments yield power to them, they'll rain nuclear fire on the world! So, it's up to you (and a friend), as Special Forces pilots, to save us all from realising this grimmest of scenarios. And lo, another military-style vertical-scroller is born. Before jumping head-first into the action, however, you have to choose a sword with which to strike back. In other words, you can choose between three different jet fighters - the Silph, the Valkyrie, and the Seylen. 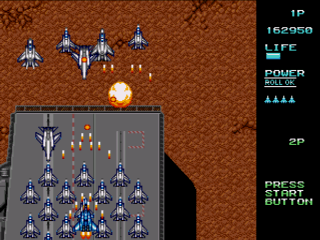 As well as differing a little in appearance, these jets feature the usual fast-but-weak, slow-but-strong, and jack-of-all-trades variations. To be honest though, it doesn't make a great deal of difference which one you choose as once a couple of power-ups have been collected they all perform at a similar level! They can all take a couple of hits before they go down, too, which can certainly prove helpful! Anyway, once you've chosen you'll take to the skies over New York, the first of six fairly long stages. Here you'll be up against a startlingly well-equipped terrorist army consisting of jets and helicopters, which form the bulk of the airborne assault, as well as various tanks and guns which obviously attack from the ground. As is often the norm, each stage also includes a larger mid-stage enemy and culminates in a boss fight. These generally consist of larger variations of standard enemies. The first stage, for example, features a giant tank in the middle and a battle-chopper at the end which launches barrages of homing missiles at you. 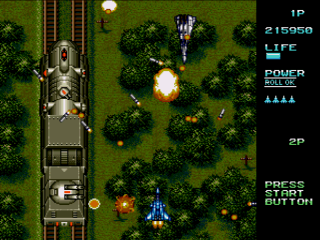 The six stages here are set over some familiar landscapes. As mentioned, the first takes place over a city before you move on to a desert stage. Next up is a forest stage which features some very tough trains festooned with guns, followed by a sea-based stage where the ground-based enemies are replaced by various gunboats. The penultimate stage starts off over a cityscape at night before revisiting some of the previous backgrounds and the final stage is pretty much one long boss fight! As always, you can increase your jet's manoeuvrability by collecting speed-ups and there's a selection of weapon power-ups available too. Each jet is initially armed with a weak but rapid-fire Vulcan cannon which can be increased in power and range, but the effect of the upgrade depends on which jet you're using. Other weapons include Bombs (powerful but short range), Defender (eight-way shot - great range, slow fire-rate), and Homing Missiles. 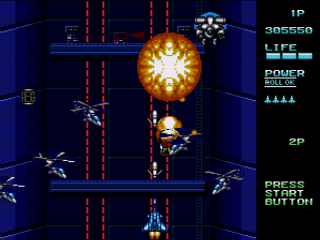 A power-up that varies between the three jets even more is the S-Unit. This device attaches to your jet and provides a unique weapon for each - a wave shot for the Silph, a flame-thrower for the Valkyrie, and multi-directional shot for the Seylen - which replace your existing weapon. If you want, you can jettison the S-Unit which has the effect of a smart bomb. Pressing the same button when you don't have an S-Unit activates your jet's charge-shield thingy which not only protects you from damage for a short while but also lets you cause damage to enemies at the same time. Even better, this ability can be used as often as you want as it's powered by an energy bar which slowly refills itself after use. 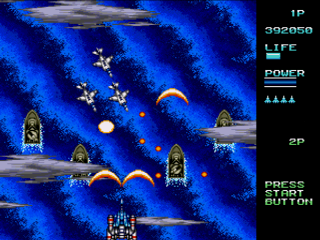 Well I've finally played Vapor Trail, pretty extensively too, so I've finally got something to say to those who complain about its absence in the Top Five list, but does it deserve a place there now? I would have to say no but it's not too far off. My initial impressions of it were good. Graphically everything moves fairly quickly and smoothly but the longer I played the less impressed I became. The scenery is a bit of a mixed bag. The first and third stages are quite nice but the others are rather plain and repetitive. The sprites are even more repetitive with few new ones introduced after the first stage, and there's some considerable slow-down later on. Musically things are better. There's some good tunes here but sadly the sound effects are quite poor and there's some horrible digitised speech. 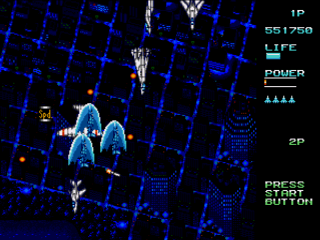 Happily the game plays well enough to overlook these things to a certain extent - it has nice control and collision-detection, it's a good challenge, and it isn't particularly unfair, but at the same time it doesn't really have any stand-out features either. There's nothing actually wrong with Vapor Trail, it's just that nearly every aspect of it has been seen dozens of times before in games like Twin Cobra, Raiden, Aero Fighters, etc, and they're no better here. By all means give this game a go if you don't have many requirements beyond shooting stuff up, you could certainly do a lot worse on the MegaDrive, it's just frustrating because Vapor Trail is a slick, challenging, and enjoyable game, not to mention a top-notch conversion, and with a bit more originality and creativity it could've been a classic.