If I review any MD shmups in my upcoming feature that get really high scores, they don't appear in this Top Five because I hadn't played them before! (a.k.a covering my arse!) 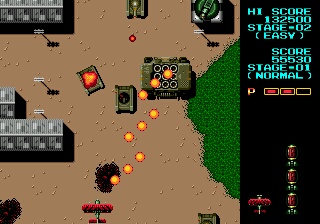 Flying Shark, in my view, is among the finest vertical scrollers of all-time so it's a shame it never saw a release on a system able to do it justice such as the MD. I guess we'll have to settle for the game considered its unofficial sequel - Fire Shark! Still, it's not much of a sacrifice as this game retains the basic premise and many of the distinctive features from its forebear and adds a few more of its own for good measure! It's true that the graphics and sound do not represent the pinnacle of MegaDrive achievements but they're not bad, and this is still an enjoyable, if slightly easy, vertical-scroller packed with tons of airborne and ground-based targets to lay waste to. 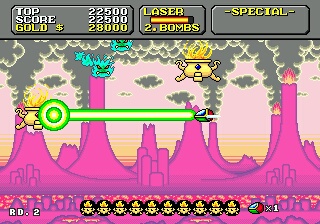 Sega pretty much invented the 'cute em up' genre with the crazy, not to mention eye-melting Fantasy Zone, but after numerous ports and two sequels on the Master System many fans feared the end of the series was nigh. Happily these fears were unfounded however, for this apparent final swan song for the series on the MD is fully deserving of its 'Super' prefix! It's instantly familiar to fans of the series but pretty much everything is bigger and better than ever before. The graphics are brighter and more colourful than ever, there's a fantastic soundtrack including arrangements of previous favourites, lots of new weapons, creative bosses, and the same ultra-addictive gameplay we had come to know and love! It can be tough going but I defy anyone to not enjoy every crazy minute of this psychedelic blaster! 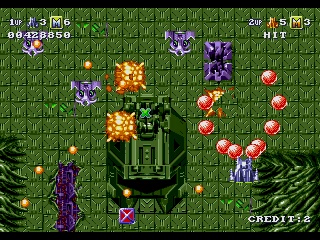 The best vertical scroller on Sega's 16-bit powerhouse? Quite possibly (out of the ones that I've played anyway) but this offering from EA is really tough going too. Don't let that put you off though as it's worth the effort! With no traditional level structure to speak of, devastating weaponry, dozens of on-screen enemies, and a few interesting ideas such as the 'Chameleon' ships which employ cloaking devices, it's well worth persevering with. It's also one of the few simultaneous two-player shmups on the MegaDrive too which is a real rarity in this genre. Battle Squadron may be challenging but it's a hell of a ride while it lasts. Plus, it's better than the Amiga version by some margin (sorry, fanboys!). It has some fantastic music too! 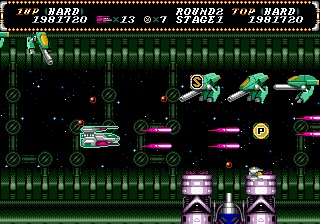 This underrated gem was a pretty early release for the MD but still ranks among its best coin-op conversions. It doesn't have the graphical tricks of some games (see below!), but it is one of the most polished, balanced shooters I've ever played. It's true that it's somewhat unforgiving (it's basically a one-life game) and doesn't really have much in the way of power-ups, but it's hard to complain when the game is still so good in spite of that! One of its biggest draws is that it's not a mindless button-basher like so many others - strategic use of weaponry is required to make any headway here, and with varied levels, a rocking soundtrack, a well-graded difficulty curve, and perfect collision detection, you'll want to as well. Not the flashiest game by a long way but its many plus-points make this one of the best! 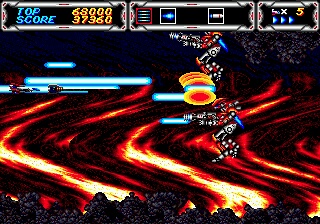 Yes, yes, I know many shmup fans prefer TFIV. I personally like all of the Thunder Force games, but I'm really struggling to remember any shooter I've enjoyed as consistently as this one on any system. It's pretty easy (although maybe that's just because I've played it so much!) but how could you not be impressed with this game? At the time of release it was among the best-looking games on any system and is rife with screen-clearing weaponry, memorable enemies, fancy graphical effects, and it features one of the best shmup soundtracks ever. Couple that with the huge variety between levels, impressive selection of weapons, and immense bosses, and you've got a game that screams quality from every pore. It's so good they even made an arcade version!


Edit: This post has apparently inspired my friend and fellow blogger, Graeme (Jdanddiet), to compile his own Top Five MegaDrive Shmups list. See his choices here...
Posted by RetroKingSimon at 17:40