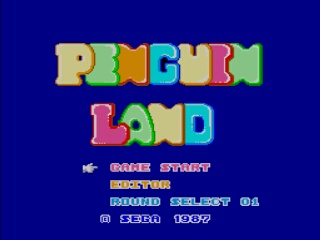 Back in the late 80's when my beloved Master System was my console of choice, I was rarely able to add to my game collection. I had around 8 games, mostly considered classics nowadays and highly rated back then. As I spent time looking through the magazines of the day, there were, however, always a few games that I wanted but was never able to get my hands on. Penguin Land was among these. Despite the unspectacular scores it generally received in the magazines, I found myself taken by the premise and screenshots and decided that I had to have it! This was, I suspect, mainly due to my fondness for platform/puzzle games, but it wasn't until many years later - around 10 in fact - that I finally got round to buying it. Was it worth the wait?

As you may have guessed from its name, Penguin Land features... a penguin! He is no ordinary penguin, however - he's a space penguin called Overbite, Penguin Mission Commander, who has rather carelessly lost three eggs on a distant, icy planet. After flying to retrieve them, he has to push them back to his spaceship and safety. This must be done over the course of 50 vertically scrolling rounds through which you must push the egg carefully without breaking it, from the top of the stage to the bottom. Of course, it's not that simple, for there are various hazards awaiting you and your egg, not least of which is a time limit. Polar bears, rising and falling section of rock walls, birds that drop bricks on your egg if you don't move it for a while, and ghosts which mess up your controls are also out to hinder your progress as much as possible too!

Luckily, with his eggs trapped on apparently such a hostile planet, Overbite is free to walk and jump around the rounds to his hearts content. A vast majority of the blocks are blue ice blocks. Overbite can break the ice blocks beneath him by pecking them and the egg can then be pushed through the gap. Be careful though - the egg can't fall more than three blocks downwards without breaking, so you'll have to take some time to consider which blocks to break. There are also cracked blocks which break as soon as the egg touches them, stone blocks which can't be broken, and tubes which Overbite or his egg can drop through. Also sprinkled liberally around the stages (increasingly as you progress through them) are rocks, which can be pushed around much like your egg, and can also be pushed off platforms onto polar bears below!

Like most platform / puzzle games, Penguin Land is a simple concept, yet fiendishly addictive to play. The graphics, whilst pretty repetitive (only the background colour changes really) are neat, appealing, and suit the game style well. There is some slight sprite flicker if too much occupies one line, but it's rare. There aren't many tunes in the game though. A few little ditties and just the one main game theme. It's a jolly, catchy number, but may soon grate, especially if you dislike this kind of tune to start with! Sounds effects are minimal but decent enough. As is often the case with games like this, though, it's the gameplay that makes all the difference. It's easy to start playing but hard to master, and with 50 challenging rounds to play through, it will last a fair old while!

You can choose any of the first 30 rounds from the title screen and there's even a level editor with which you can create additional rounds and save them on the cartridge's battery back-up. After waiting so long to play this game, I won't say I was bowled over by it when I finally did get to play it. To be fair, it was probably an unspectacular release, even when it came out, but it has proven to be a highly playable and addictive little puzzler that not many people seem to know about. If you like platform games that require a bit of thought and planning, give this charming game a try!