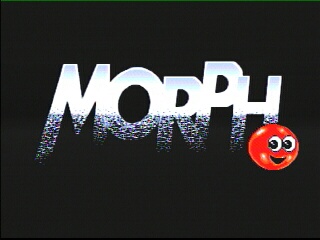 Hey! Who remembers Morph? He was a weird brown thing made from plasticine who changed shape and lived in a box and who had his own TV show when I was a kid. I think only British readers will know who I'm referring to, but whether you remember him or not is irrelevant because this game is nothing to do with him! This Morph is a boy, Ralph Morris, who helps his crackpot uncle (called Professor Krakenpot, appropriately enough!) to test his new teleporting machine. The test inevitably goes wrong and alters his molecular state, leaving him in a 'state of limbo'. Happily for us, however, this results in a type of game that was fairly common on the Amiga - a 2D scrolling platform puzzle game!

In order to find all the lost parts of the teleport machine so that Morph's uncle can rebuild it and return him to normal, it's your job to guide his disembodied form around four different areas - Gardens, Factory, Sewers, and Laboratory. Each is absolutely packed with hazards and puzzles, and to navigate them, Morph can switch between four different states - flexible, solid, liquid, and gas, and each has very specific advantages and disadvantages. Morph in a flexible state, for instance, is like a rubber ball and can bounce up steps, ledges, and over gaps, and can also float in water. He is easily burst, however, on things like rose thorns, broken glass, spikes, or fire. The solid state sees Morph act like a metal ball. He is consequently very heavy and can smash through special destructible blocks and is unaffected by sharp objects but he can fall through fragile platforms if he's not careful and cannot move up slopes. He will also sink in liquid of any kind.

In a liquid state, Morph is a water drip which allows him to pour though small gaps like drains and small holes which, in any other state, he would be too big to fit through, and he can also put out fires simply by moving into them but he dissolves in pools of water or any other liquid and is also unable to move up slopes. Lastly, in a gas state, Morph takes on the appearance of a small cloud. This is very useful for floating up to otherwise inaccessible platforms and areas but since he is lighter than air, he cannot move in a downward direction. He can, however, be sucked into fans and ignited if he strays too close to a fire. You might be forgiven for thinking that, with a little strategic thinking, all of those abilities make Morph seem like an easy game. If you do think that, then you're in for a shock! As mentioned earlier, the game is set over four areas and each of these is divided into nine levels. Though you can try any of the four areas you want, the levels in each must be completed in order. The object of each level is to find the missing teleporter part (which is always a cog - teleport machines can't be too hard to make if they only consist of cogs!) and reach the exit within the pretty strict time limit.

Still sound easy? Think again - Morph can only use a set number of transformations on each level! The information panel at the bottom of the screen features several things. On its right is a star with a number beneath it. The number indicates how many times you can transform on that level. Luckily more stars can be found during the course of a level, each of which increases your allowed transformations by one. On the left of the information panel are symbols representing each of the four states you can transform into, and each of these also has a number beneath it indicating the number of times you can assume that particular state. This number can be exceeded but must be at zero or above to finish a level successfully. If it ever falls below zero, you must find special icons indicative of each of the four states to return the counter(s) to zero or, even better, a positive number (for which you receive a bonus) before exiting the level. It's not too much of a disaster if you do use too many transformations, though, as fortunately you can attempt each level as many times as you wish.

That's Morph himself taken care of. Now we come to the environment in which he moves around. Each environment has features and hazards that only appear in that particular area, such as brambles in the Gardens, and conveyor belts in the Factory, but there are also some that may appear in any area. Some of these include pipes, electromagnets, switches, direction blocks (which only allow travel in the direction indicated on the block), and locks, which obviously require keys. There are even some helpful items to be found too like x-ray specs, maps, teleports, stop watches, and treasure chests. Among the most useful items, however, are heater blocks and freezer blocks which provide Morph with 'free' transformations when entered. The former transforms him into the next state of a lesser density (i.e. from solid into flexible), and the latter transforms him into the next densest state (i.e. gas into liquid), and they can be a life-saver!

One of the most important things with a game like this, in my opinion, is its difficulty level. Many platform/puzzle games have one or two extremely easy levels and then suddenly get damn near impossible. Luckily, Morph is not a member of this club, although it will probably seem like that to begin with! Some aspects of controlling him do take a bit of getting used to, like when bouncing around as the rubber ball or navigating the mazes of tunnels and pipes, but it's fine after some practice. Once you've got the hang of controlling him and exploring the levels, it will not seem quite so daunting. Many of the levels are fairly intricately designed and you'll probably find something new every time you play on some of the more elaborate ones. There a fair few secrets and bonuses to collect but they aren't vital to the completion of the level and the time limit for each level is generally pretty strict so skillful play if often required to obtain them and get ultra-scores.

One of the most appealing things about Morph, at least initially, is the graphics. They really are quite lovely. Moprh himself is fairly basic in appearance but is pretty well animated, nicely defined, and has some amusing expressions. The backgrounds are also fairly basic but feature some lovely shading, and the foreground scenery looks particularly nice. Each area is colourful and distinctive, with the Gardens being particularly pleasing. Some of the levels are pretty big too! As is often the case with Amiga games, Morph does not feature both in-game music and sound effects. In this case, the in-game sounds are restricted to some sound effects although they are realistic, varied, and atmospheric. Morph himself has unique sounds for each state he’s in too, such as a bouncing noise when he’s a rubber ball, a heavy clanging noise when he’s a metal ball, and a glooping noise when he’s in his liquid state (the gas state is pretty quiet, though). The music is restricted to a few little ditties here and there and that's about it. 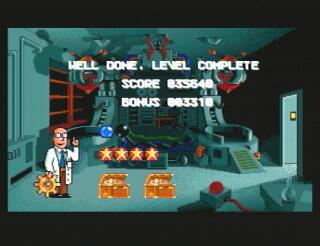 Like any good platform/puzzle game, Morph features a decent amount of levels, thirty-six in this case, and they are good ones for the most part too. They contain all the usual stuff like tricky puzzles, collectible items, and, perhaps most importantly, secrets, and there is more than one way to complete some levels. Most of them will need lots of exploring before they can be finished and this can be a little frustrating - much of it involves trial and error, which isn't always good, but if the levels were too simple, the game would be far too easy (and rather boring). Besides, you get infinite continues and you can restart any level whenever you want to so it's not too bad! Overall, It looks very nice, is very addictive, and its difficulty curve is well pitched allowing steady progress whilst remaining challenging enough to keep you trying for a long while. Plus, almost everyone I've spoken to has never played it. So give it a try!