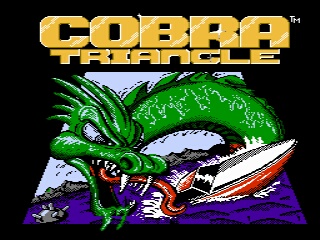 One of the reasons I decided to start covering this genre of games is that it's one I've enjoyed immensely in the past, but so far this enjoyment has been limited only to a handful of titles. There are still many I haven't actually played before, so what better excuse to start? For the third game in the feature, I thought I'd take a look at one that tried to do something a little bit different. Enter Rare. This NES-exclusive is a bit unusual for an overhead racer for several reasons. Not least of these is the fact that it's single-player only! That's right, the feature that is often the main appeal of games of this nature is entirely absent! Do not despair, however - much has done by our ever-reliable friends at Rare to ensure the longevity of this, one of their first forays into the racing genre and, for a change, it features not cars but speedboats!

It's a scrolling, isometrically-viewed affair which only shows a small part of any given course or arena at any time, rather than the more common single-screen racers. One reason for this is that it's not even a racing game at all! In looks and style you'd be forgiven for thinking it's one, as I did before I played it for this feature, but there's not a great deal of actual racing going on here. The game consists of 25 'missions', and on initial evidence, all seems normal. The first mission sees you racing along a river amidst other speedboats, but rather than racing them, it seems the object is to shoot them with your boat's onboard cannon! In the next mission you must race up a straight waterway jumping ramps to grab airborne items. Next you must safely dispose of some mines while opposing boats try to stop you, then you have to navigate an obstacle-strewn stretch of river while fighting the current. Other missions include protecting swimmers from enemy boats, jumping waterfalls, and shooting targets.

Every few stages you are also faced with a boss. These take the forms of giant sea-monsters such as serpents or crabs! Of course, as well as accommo-dating enemy speedboats, the various waterways also feature additional hazards. These include sharks, logs, whirlpools, ramps, electrical shockwaves, and gun turrets on the river banks. Luckily, not all the luck is going against you. The numbered Pods carried by some enemy speedboats can be collected to power-up your 'Cobra Class Speed Boat', equipping it with turbos, cannon upgrades, higher top speed, missiles, or a forcefield. These power-ups are collected in a Gradius style, i.e. you can save up the Pods you collect and choose which power-up you want. The more Pods you collect, the better upgrade you can choose. You'll probably need them all!

My playing of this game for this review represents my first extended session on an NES game ever! This is because, for those who don't know me, I was a big Sega fanboy back then and fiercely loyal to my Master System! I was obviously aware of the NES and many of its games, but I didn't play them. Cobra Triangle is, however, one of the ones I've always wanted to play, thanks in no small part to the review in C&VG and the glowing recommendation that accompanied it. Now that I've finally played it, what do I think? Well, as I said earlier, it's not really what I was expecting - I thought it was basically a water-based equivalent of Super Off-Road! But nonetheless, it's good fun, original, but tough!

Graphically, Cobra Triangle is fairly average in my view. Granted, I have little to compare it to from personal experience but things look pretty basic here. Backgrounds are largely featureless and pretty repetitive, although both they and the water do change colour every few missions (the ice level looks nice). The sprites are pretty nicely drawn, though a bit small, and their animation is somewhat lacking. They all look similar from what I've seen too, and there's a bit of flicker when things get busy. The bosses aren't bad though - they're pretty big and have a bit more animation than the smaller enemies. The music here is fairly uninspiring too, unfortunately, and not memorable at all. Sound effects are fairly varied but pretty minimal. And if I hear that Goddamn 'hit-by-a-whirlpool' noise one more time I'm going to smash something. Anything.

In fact, the game in general is really difficult and pretty frustrating. Some missions are easier than others but things gets insanely tough later on. For example, if it wasn't for the benefit of being able to save my game position on the emulator, it would've probably taken hours just to get past the waterfall stage. You have to take a run-up to make it over the waterfalls (for there's not just one!) but the ramp is small and usually moving from side to side. On top of that, there's often whirlpools before the ramps which throw you off course! It does get ridiculous at times, but it's not all bad - the mine disposal stages are good fun, as are the boat shooting runs. I just wish all the missions were a little more forgiving! 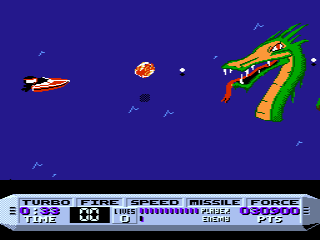 Despite the average presentation in this case, Rare usually pull out all the stops when it comes to design and gameplay and it's no different here. The game is full of original touches and its very notion is unique - I've not really played anything like it before or since. To be honest though, original or not, I just didn't enjoy playing it that much which is a shame as it could've been such a great game if it wasn't so damn difficult!