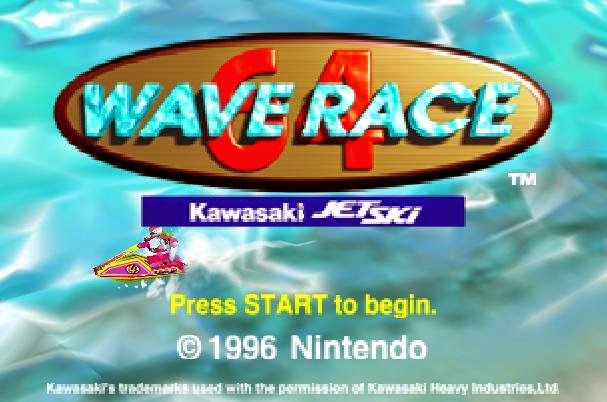 As I recall, during the mid-to-late 90s there was a mini-craze for jet-ski racing games. Most of the more extravagant ones were monstrous arcade behemoths complete with actual jet-skis to sit on and be thrown around by as you play. If one game can be singled out as starting this craze, it could well be Wave Race 64, which ironically has never even graced an amusement arcade (to the best of my meagre knowledge anyway). It's actually the second game of the series after the lesser-known Game Boy outing, having been initially unveiled in 1995 and released a year later alongside the Nintendo 64 itself. Having such a game as a launch title alongside Super Mario 64, amongst others, you could be forgiven for thinking that it would be somewhat over-shadowed, but many gamers revelled in the amazingly realistic water-based racing action offered by Miyamoto-san's other launch title, and with good reason.

Wave Race is unsurprisingly set in the world of jet-ski racing. There are four riders available for you to choose from (whose names you can change if you so desire) and each has their own Kawasaki jet-ski. These vary in their handling, acceleration, grip (or water-based equivalent), collision stability, and maximum speed, and you can also customise each machine's settings. Once you've chosen your preferred machine, there are four play modes to choose between - Championship, Time Trial, Stunt Mode, and Two-Player Versus. There are nine varied, circuit-based courses to race through and each race lasts for three laps, although this can be changed on the options screen if you so desire. As was starting to become common around this time, however, some of the courses are locked to start with, but more on that later!

It's not just racing you're required to do around them though. Each course has many colourful buoys strategically positioned around it which you must steer around in the prompted direction, slamon-stylee - go round the left of yellow ones and round the right of orange ones - while continuing to hold off your opponents. Each one you pass successfully increases your engine power level, which has five stages. The higher the level, the faster you go. If you miss a single buoy, however, your power level will fall back down to level zero. If you think that's harsh, miss more than five of them and you're automatically disqualified from that race! The perimeter of each course is marked by pink buoys. If you should stray outside the boundary, the 'Course Out' counter will begin. Unless you return to the course within five counts, you will be retired.

There are also numerous obstacles positioned around the courses like crates, rocks, logs, and abandoned boats, and some of them feature tunnels, alternate routes and even the odd short-cut. As mentioned earlier, some courses are locked at the start of the game and the only way to access them is to race in the championship mode. You are able to practise first in a small area called Dolphin Park, but once you feel ready, it's time to race! There are three difficulty levels but only one can be chosen for your first championship - normal. This mode is contested by three other riders over six courses. Your finishing position earns you points and if you have most points after all six courses have been raced, you can then move up a level. If you can then end up on top after the seven courses of the hard mode, the ultimate challenge awaits- the expert mode.

This mode is contested over eight courses (all of them except Dolphin Park). Win this mode and you win the game! As the difficulty level increases, so will the speed of your opponents, as well as the number if buoys and other obstacles on each course. If you manage to finish the game, however, thereby unlocking all the courses, they will be available to race on in the other game modes. Time Trial mode allows you to race on any of the courses minus the other racers. There are still three difficulty levels and the object is obviously to get the fastest lap and course times possible. The Stunt Mode also allows you to select any course, this time including Dolphin Park. The emphasis here, however, is not so much on speed but on points, which are obtained by performing various stunts and tricks using any ramps that might be around.

If there aren't any on your chosen course you'll have to create your own ramps! Different stunts will obviously give you varying scores, but you are also judged on your accuracy. Courses in Stunt Mode are also populated by numerous rings. Passing through one awards you with fifty points and each one you pass through consecutively following that will increase your score by a further fifty points each time. Some of the rings are even submerged. These can be passed through by performing a submarine dive, which is done by pointing your jet-ski’s nose downwards when jumping from a ramp. If done correctly, you will hit the water nose-first and travel underwater for a short distance. This technique is also useful for avoiding some of the obstacles that litter the courses, particularly in the expert mode.

The only other way to earn points is simply the amount of time you have remaining when you finish the course. Each tenth of a second gives you five points. Like so many arcade style racers though, Wave Race is an immediately enjoyable and playable game however you choose to play it. This is thanks, in part, to its simplicity, but to give that all the credit would detract from the game’s other excellent features. Most notable of these is the authentic way in which the jet-skis behave on the fluctuating wibblyness and ferocity of the water. The physics are spot-on which makes for some exciting racing but the machines also handle well and the slalom style of play is both original and makes things more interesting. If there’s one aspect of WaveRace that’s more famous than any other, though, it must be the incredible graphics.

It's definitely not hard to see why they got so much attention either. The races are set at different times of day and the colour of the water changes accordingly. In normal light it's clear blue but at sunset it'll be orange or pink and at night, black. Whatever colour it is, it looks stunning and surprisingly close to the real thing. Even more impressive is the convincing way it behaves too - many maintain to this day that it's the most realistic water in a game ever! Besides the water, Wave Race's graphics are still superb in every area. There's some excellent lens-flare, some awesome reflections on the water, and some nice effects such as the odd dolphin or killer whale swimming past, but it's the courses that impress the most. Each of them looks distinctive even though they are all water-based, and most are set in interesting locations too.

Besides the obligatory sandy beach type courses there is a course set in a marshy area complete with ducks and reeds, another where you race around a giant tanker, and even one over a coral reef as the tide is going out, for instance. This is also a pretty loud game! The best way to describe the music would probably be as bright, cheerful, summery music - the kind of stuff you’d expect to find in a game with a setting such as this one. The sound effects, while not particularly plentiful, are equally superb. The jet-ski engine noise is perhaps the loudest sound effect ever heard in any game. My N64 is connected to my hi-fi and when the jet-skis are revved, the graphic equaliser is permanently at maximum! Other effects are realistic such as impact noises, and there are two announcers - a female one on the presentation screens and an enthusiastic yet somewhat repetitive male one is also vocal throughout play.

If there is one thing that you can pretty much always rely on good old Nintendo for, it’s the very high quality of their own games. The presentation here is of outstanding quality and the game really is an amazing experience. What with the lush graphics, relaxing music, the water constantly splooshing and tossing you around... you can almost feel the spray in your face! It's not all superficial either, the game is immersive and thrilling to play and is one of the few videogames I've played which is more of an experience than a mere game. There really isn't any bad points here. The only possible criticism you could level at it is that it’s so good you’ll probably have seen all it has to offer in an alarmingly short period of time, but it's so enjoyable to play that even if it didn't have a top-notch two-player mode, you'd still keep returning to it for years.