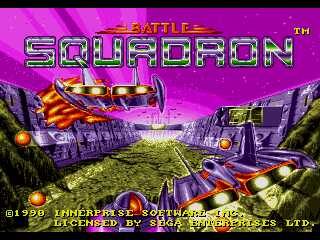 The days of the 16-Bit Console Wars were an interesting time to be a gamer. If the SNES was better at one type of game, the MegaDrive was better at another. One area in which many agree the MD had a firmer foothold is that of the shoot 'em up. Yes, the SNES had some blinding examples of the genre, but the MD won the day through sheer weight of numbers. An early example of the vertical scrolling shooter on the MD is Battle Squadron, a product of the bygone era of bedroom coders which saw many talented enthusiasts try their hand at that programming lark. Most games resulting from these endeavours were of course very limited, but on the odd, rare occasion, something much more interesting would emerge. Battle Squadron's success was probably not that immense, but Martin Pedersen did well enough from it to enable him to help form Innerprise Software who subsequently went on to develop several more titles.

Originally released on the Amiga, Battle Squadron is apparently the sequel to fellow Amiga blaster, Hybris. This installment sees you facing off against the evil Barrax Empire, which initially appears to be nothing more than a bog-standard pretext to a bog-standard vertical-scroller. Actually, to be fair, it's not the most remarkable shmup ever, but it does have a few tricks up its sleeves! For starters, there are no levels. Well, kind of. You start above ground fighting off swarms of enemy fighters as well as lots of ground-based vehicles and gun turrets. Before long, you'll come to a big crater or chasm of some sort in the ground which you can enter. You don't have to though - you can fly straight past if you want to as it will return over and over again. You'll need to enter eventually though, and upon doing so you'll be faced with an underground area crawling with different types of enemy craft and installations, at the end of which is a boss. Once you defeat the boss you'll return to the surface again. If you enter the underground section at the first opportunity every time, you'll eventually fight through three surface sections and three underground sections before you get to face the Ultimate Alien Force of Evil. To quote the instruction book: "You will face Surlotech in the final battle. He's known for cruelly toying with enemies and laughing at their feeble attempts to destroy him". Sounds like a charming fellow.

When playing this game, there's one thing that quickly becomes apparent - Battle Squadron must be one of the most enemy-laden shooters ever - they're everywhere! It's lucky then, that there is sufficient weaponry available (though barely so) to 'convince' them that their agenda is a flawed one. You start the game with the Orange Magma Wave. This is just about sufficient at the start of the game but needs to be powered up pretty quickly. Once this is done, it becomes a formidable weapon which has a fairly powerful forward shot as well as four less powerful shots which fire at diagonals. Other weapons are the Green Emerald Laser which is very powerful and fires rapidly, but has a very limited range (straight forward), Red Magnetic Torps, which covers most of the screen, but aren't too powerful, and the Blue Anti-Matter Particle Beam. This weapon also fires very quickly, and shoots both forwards and backwards, but again, has a limited range.

These tools of destruction can be found by destroying the Barraxian gunships that carry 'X' capsules. Once freed, these drift back and forth across the screen changing colours as they go. Collecting them will give you the weapon of that colour and collecting another capsule of the same colour will power it up one level. If you're destroyed, your weapon's level will be reduced by two, though thankfully you don't have to restart the level! One helpful way to avoid being shot down, however, is to deploy a 'Nova Bomb'. These swirling waves of destruction, more commonly referred to as smart bombs, destroy or damage everything on the screen (except your ship, obviously). More importantly, they also rid the screen of enemy bullets. These can be stockpiled by collecting the 'M' icons that result from the destruction of an entire squadron of enemy fighters (which appear increasingly frequently), and it's a very good idea to save as many as possible - you'll need them later on!

But what of the enemies? Poorly designed ones have been known to ruin otherwise decent shooters, so thankfully that's not the case here! There are fourteen different alien attackers altogether - not a huge number I'll grant you, but there are some highly creative ones among this contingent. Some are your standard gun turrets or formation-flying, few-shots-to-kill aircraft, while others are far meaner. One original feature of Battle Squadron from which it derived much of its fame is its 'Chameleon' ships. These are sister ships to the standard fighters, except they're invisible! They can be detected by the funny noise they make when your weapons strike them, and by a slight shimmering of the area over which they're flying (in a similar style to the titular creature from the Predator movies). Some enemies (mostly the various kinds of gun turrets) leave behind green 'X' icons when you've destroyed them "exposing their jewel caches", and each one gives you a thousand points at the end of the 'section' (i.e. when you go underground or back above ground).

Despite the fact that Battle Squadron was first released on the Amiga, this version is near enough identical. That doesn't mean it looks bad though. On the contrary. Though there's not many backgrounds, and one of the later ones will make your eyes bleed (not to mention render enemy bullets near invisible!), the graphics are very decent. The sprites are varied and some of them pretty sizeable, and there's some lovely parallax scrolling on the underground sections (something the Amiga version lacks). Scrolling is also smooth, even with 15 or more enemies on the screen at once! It's not just your eyes that get a treat here either. Game music fans will be pleased to hear that the sounds accompanying this manic shooter come courtesy of the great Rob Hubbard, which pretty much guarantees top quality music. Whilst there aren't many tunes, the ones that are here are memorable and of typically high quality, as are the superb sound effects.

One of the first things you'll notice about this game is undoubtedly its difficulty. Whilst it's true that the number of lives, credits, enemy bullets on screen at once and enemy bullet speed can all be altered, even on the lesser settings, this game is still tougher than a disgruntled Chuck Norris. There's not a single enemy in this game that goes down from a single shot, so until you've powered up your ship, prepare to practise your bullet-dodging skills! Even once you're powered up things are no picnic either. Undestroyed gun turrets can still fire at you from behind after they've left the screen, Chameleon ships appear from holes in the ground (sometimes right on top of you), and there's even heat-seeking missiles that can't be shot down! With a bit (or a lot) of perseverance, however, some lengthy and impressive blast-a-thons can be enjoyed. One extra special thing about Battle Squadron is that it has a simultaneous two-player mode! A rare thing indeed for a shooter. It's just as hard with two-players though, so don't go forcing a friend into playing just so you can see the ending!

Overall, this is a tough game, but not unfairly so. Okay, so invisible ships appearing beneath you don't help matters but it's not like it's one of those ridiculous 'bullet-hell' games! One thing's for sure - you won't get a second to relax when playing it. It's like a gaming equivalent of one long sweaty-palmed adrenaline rush! There's always something going on and its difficulty will keep all but the most awesomely skilled of gamers going for a while, and all but the most pathetically skilled will most likely want to keep trying to beat it.