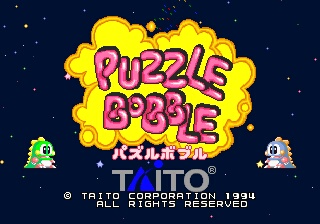 I think it's safe to say that Bubble Bobble has stood the test of time well and is rightly regarded as an all-time classic. It's also safe to say that it has perhaps remained Taito's most popular series. There have been numerous conversions of the games to home systems, particularly Bubble Bobble itself, and some of these conversions have appeared on newer systems in just the last few years. There have also been a number of 'updates' or 'remixes' of these famous games such as the Evolution/Revolution games on the PSP and DS. It's odd though, that there had been no all-new, original games from Taito starring their most beloved of characters until Puzzle Bobble appeared. In spite of the fact that the second and third games in the original platform-based series (Rainbow Islands and Parasol Stars) feature Bub and Bob as their real human selves, is it their appearance as dragons in the original that most gamers most fondly remember. It is fitting then, that the latest game to feature Bob and Bob returns them to that popular guise.

As you've probably guessed from its title, Puzzle Bobble is a puzzle game. It draws its influence from Columns and its ilk but it's far more that a mere clone of Sega's classic colour matching game. It is played on a single screen which, when play begins, is occupied by many bubbles of differing colours. They hang from the top of the screen and descend in various patterns depending on the stage. At the bottom of the screen is Bub (the green dinosaur). He is in control of a bubble-firing contraption of some sort which is located in a fixed position at the bottom of each stage alongside Bub and can be rotated left and right in a circular motion through 180 degrees. The object of the game, you see, is to clear the screen of bubbles.

This is where the main Columns influence comes into play. You are given mere seconds to fire each bubble from your bubble-firing device (otherwise it'll fire automatically) and their colours are random, though you do get the advantage of a 'next' indicator. Each time you fire a bubble into two or more of the same colour, they'll pop. If you manage to pop some bubbles that have others of different colours hanging from them, the stray bubbles will fall off the screen (they need something to hold onto, after all). This is called 'dropping' bubbles. The more bubbles you can 'drop' in one go, the higher your score will be. All the while that this is going on, the ceiling of the level is gradually descending too, which obviously pushes the bubbles closer and closer to the bottom of the screen (which can induce a Space Invaders style panic!). If any bubble(s) fall below the level of your bubble launcher (this limit is called the ‘deadline’) then it'll be game over.

In the ultra-popular two-player mode, the screen in divided vertically down the middle. Bub occupies the left-hand screen and Bob occupies the right, and both players have control of their own bubble-firing devices. Each time you clear a reasonable quantity of bubbles in one go, your opponent’s playfield will be liberally sprinkled with random bubbles. The more you clear, the more they will receive! If a player clears all of his or her bubbles first they are the winner. If a player’s bubbles dip below the ‘deadline’ first they are the loser. Pretty standard stuff really, but who cares when it's so much fun! And let's face it -  it's the two-player mode that most gamers will play almost exclusively anyway!

The one-player mode is pretty easy, comprising of 30 rounds, but it's still great fun and relaxing to play. It initially appears to be one of those games that any old monkey could be good at, but it does have its testing moments with some screens crammed full of bubbles in no discernible pattern! Some others, however, can be cleared with a single well-aimed shot, and bouncing the bubbles off the side walls of the stage is an extremely useful art to learn. The first stage you play of each new credit will see your bubble launcher equipped with what basically amounts to a laser-sight, which shows the trajectory the bubble will take. This is particularly useful for rebounding shots and is a good training feature. Puzzle Bobble can get rather repetitive for one player though, but it's also pretty damn addictive too.

Being a single-screen puzzle game, I don't think anyone will be surprised to hear that Puzzle Bobble is hardly a jaw-dropper, graphically speaking. As I often say, however, it doesn't need to be either. Bub and Bob remain as charming as ever and the screen is usually very colourful thanks to the many bubbles that fill it. When they pop, they explode in twinkly flashes of colour and some of them even contain enemies from the original Bubble Bobble! The background and playfield-surrounding areas change in appearance every three levels and are mostly different coloured patterns. The background on rounds twenty-five to twenty-seven is different though - it features several star constellations and scrolls vertically, increasing in speed the longer you play for! Sound-wise, the game is pretty much as you would expect from Taito. There's not many tunes but those that are here are typically catchy, happy tunes, and the sound effects are great.

One thing Puzzle Bobble is renowned for is having been converted to nearly every home system to ever exist in one guise or another. It's certainly simple enough to be played on nearly anything (even a mobile phone) and yet remains supremely playable in nearly every instance! You'll probably get bored of the one-player mode pretty quickly (although it is still addictive) but when you've got a friend around, you could do a lot worse than give this a go! Its sequels made a few improvements but the core gameplay has remained unchanged since this original. There's good reason for this, however - its quick, simple fun, end of story.