Soon after my encounter with OutRun in Devon had instigated my passion for arcade games, I had developed a keen interest in the previously ignored amusement arcades in which they dwelt. Coincidentally, it wasn't much longer before some good fortune befell me. My good friend Stu and his family had started taking family trips to nearby Hayling Island every Sunday so his dad could practise his windsurfing (indeed, Hayling is supposedly where the sport was invented), and he had kindly invited me to tag along for the day.

Hayling Island itself is a fairly small, roughly 'upside-down T' shaped island located next to Portsea Island on which the city of Portsmouth is located. Whilst mostly a residential island, it's also home to some nice beaches (including a nice sandy one, unlike Portsmouth!) as well as some other facilities mostly used in the summer months such as cafes, beach huts, sand dunes, and the Beachlands funfair and arcade as well as several more arcades.

Although we spent some time watching Stu's dad impress us with his windsurfing skills as well as generally larking about on the beach, and some more testing the structural integrity of the sand dunes, it was in the various arcades that we spent most of our time. Here, Stu would mostly restrict his gaming to the plethora of fruit machines on which he was highly skilled, but my attention was directly firmly toward the games.

It was here that my gaming heritage really took off, what with the amazing variety of top-quality games available in the arcades of Hayling from all the major manufacturers, and it's this age of gaming that I miss the most. Arcades today are a depressing place most of the time. I haven't been to Hayling for a good while but the arcades here in Portsmouth now contain mostly fruit machines, coin-pusher machines, fluffy-toy-grabbing machines, etc. The only game of note here is After Burner Climax, which admittedly is a fantastic game worthy of the great name, but it seems lonely amidst all the crappy novelty machines. Anyway, from the sad present back to happy memories while I remember some of my favourite arcades games (aside from the already-covered-OutRun) from those awesome trips to Hayling with Stu and his family (and a belated thanks to you, mate!) ... 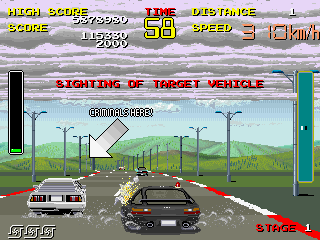 What do you get if you combine OutRun with a late 70's / early 80's style buddy cop film? Well, us lucky gamers got to find out when Taito released this classic cops 'n' robbers racing game. Taking inspiration from Sega's classic and combining it with such a popular movie genre was a masterstroke and it ended up running them both close for pure enjoyment. Chase HQ is super-fast, exciting, addictive, and more importantly, it remains one of the few arcade games I can actually finish! 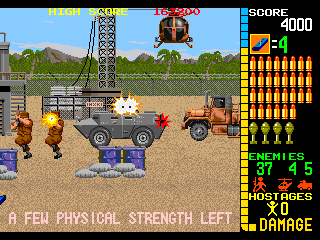 Another one from the splendid Taito, Op Wolf drew in all who saw it with its cabinet-mounted Uzi machine gun! Whilst rendering it almost impossible to play properly in the subsequent home conversions (except the excellent Master System version), the gun was obviously the main draw of this machine, and it was worth it! Spraying soldiers, armoured cars, helicopters, gunboats, and Lord knows what else with bullets and grenades had never been this much fun before! 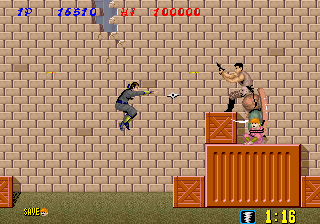 I had already given the Master System version of this a good thrashing before I found the arcade version, and the skills gained doing so were invaluable as this arcade original is a lot tougher! Run 'n' gunners are rarely as playable as this one, and with a near-perfect difficulty curve, it's also worryingly addictive! Nice graphics, authentic-sounding music, and varied enemies only help matters too. Plus, let's face facts - ninja's are just cool, full stop! 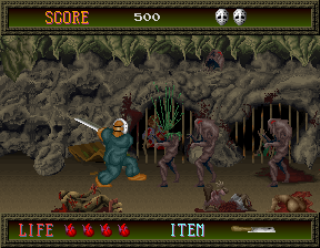 This fantastically-named game from Namco was controversial in its day and it's easy to see why. As Rick, a student under the influence of an evil mask, you must you battle your way through a mansion filled with unimaginable horrors to rescue your girlfriend! If you take away all the gruesome creatures here, all you're left with is a pretty basic beat 'em up, but that didn't matter to most teenagers - the opportunity to slice up zombies and demons with a meat-cleaver was not one to be passed up!

Probably the first polygon-based game I ever really got into, this was, and still is in my opinion (on the rare occasion a machine can be found), one of the most exciting arcade experiences to be found anywhere! Sitting astride a S.T.U.N. Bike racing down tunnels at hundreds of miles per hours shooting other craft... What more could you ask?! 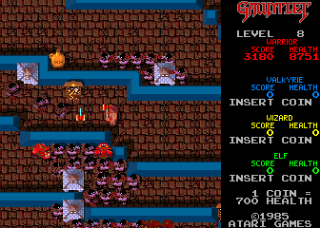 The immortal Gauntlet was already a couple of years old by the time I discovered it but time had not dulled its splendour! Yes, it's primarily a multi-player game but I still loved ploughing through the endless dungeons, even if it was on my own. It was always exciting to see if I could break my records, and if I could get someone to join me - even better. This was superbly converted to almost every system imaginable but nothing beats playing it in an arcade. 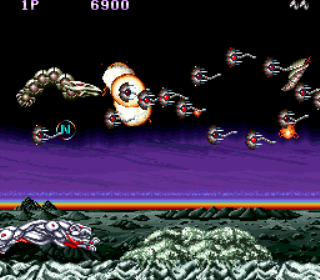 It is just me who likes this one? Perpetually an under-appreciated gem in my view, this horizontal-scroller from Jaleco is among my favourite on any system. I'm not sure about the story as I've never owned a home version, but you take control of some sort of metallic dragon creature and must blast the crap out of various other metallic creatures. The dragon's tail can be positioned to protect its head from enemy fire too. Plus, he just looks awesome! This is a top game full of non-stop blasting action, and is nicely rounded off with lovely graphics. 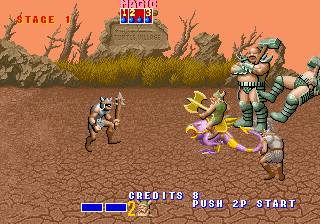 I've lost count of how many times I've played this through to the end, but it never gets boring! I still haven't played a better hack 'n' slasher and I've been looking, believe me! Everyone know the best character is Gilius Thunderhead and rampaging through the game, slicing up all the stupid Buffalos and Grandads with his axe is immensely satisfying! I know it's a bit of a love/hate game, but I'm definitely in the camp of the former. 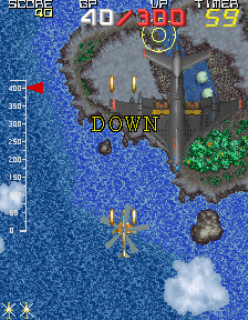 Now this is a more curious one. I used to play it every time I went to Hayling but I've never seen it anywhere else, and no one I've spoken to has even heard of it! Subsequent research has revealed that it was apparently only released on Japan so quite how one managed to end up in a Hayling arcade remains a mystery! Nonetheless, for those who didn't live near Hayling (or Japan), Metal Hawk is an overhead-viewed shmup by Namco. You control a pretty mean attack chopper which you must fly around the free-roaming stages shooting planes, other choppers, etc. But there's something different about this one - the cab also features an altitude control enabling you to descend to near-ground level to shoot up enemy installations and ground-based weapons before returning to the clouds to take out more airborne targets. It's a novel twist on the genre and features some nice Mode 7-esque graphical effects. Lost oddity or not, I loved playing the unique game. I was never much cop at it though, I'd love to find a cab somewhere and battle through to the later stages!

More than twenty years old and still the lord of the vertical scrollers to many! It may not have invented everything that it contains, but it popularised a lot of it - super-powered biplane, formation-flying squadrons of bad guys, ground-based enemies such as tanks, gun turrets, some of whom sneakily hide under the trees, etc. It's such an iconic shooter and despite some cracking conversions, the arcade version was (and still is) the best place to play Flying Shark. You can always use the home versions for practise though, which is more than necessary - this is a pretty tough game and I've never been able to finish it! I think I remember finishing the Speccy version using a poke though...

So... there are a few of the games I most enjoyed in the arcades during pretty much the only period I've had to regularly visit them. There were a lot more games there of course, including some of the all-time greats like Bubble Bobble, After Burner, Star Wars, etc, and I remember watching people play Time Traveller, the 3D hologram game by Sega (never really fancied playing it myself. though). Finding all these great games there, spending my paper round money on them, running out of money, waiting for the home conversions, getting some of the games for Christmas for my Speccy... It was a great time to be a gamer and I miss it.