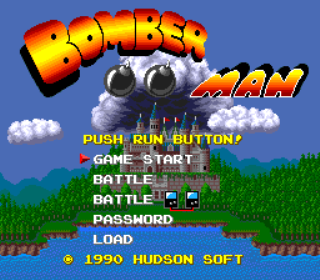 The Bomberman series is a lot more extensive than many gamers realise but the style of game that most of us are familiar with today was born right here with this release. I remember being shown it briefly on a friend's Amiga, where it was known as Dyna Blaster, but it was years later I belatedly played it properly. This time I played it on the PC Engine and it was this system which many fans come to consider home for the series. Nearly all the characteristics which would go on to define the series became popular here starting with the appearance of our hero himself, White Bomber. Whilst being recognisable in some previous games, he never looked or moved as he should. Here, the endearing chap becomes the character we all know and love for the first time! However, no sooner has he gotten used to his new togs than his sibling, Black Bomber, has kidnapped the daughter of their creator!

It appears that sneaky Black Bomberman has also acquired a castle somehow, for he has imprisoned the young lady there. To reach her, White Bomberman must blast his way through eight rounds of action, each divided into eight stages, the last of which is home to a boss. These are initially one screen in size but soon become larger scrolling affairs. As always, each stage is filled with lots of destructible, or 'soft' blocks, and lots of enemies. To progress to the next stage you must access the exit which appears when each of Black Bomberman's cronies has been destroyed but you must also find it beneath one of the many soft blocks too! Also hidden beneath one soft block per stage is one of several power-ups. These can allow Bomberman to lay addition bombs at once or extend the range of the blast, and there are also speed-ups which may not sound very exciting but are extremely useful.

These three are the most basic and plentiful of the power-ups but there are other helpful items too. Remote-control bombs are perhaps the most useful but others are available that let you pass through bombs and soft blocks and there's even shields and extra lives around if you look hard enough, or rather, if you bomb around hard enough! Yes, as I'm sure you've gathered, it's all pretty familiar stuff with one big exception. A majority of gamers associate the Bomberman games with the multi-player battle mode rather than the single-player game I've just detailed, and this release marked its first appearance. Hudson Soft however, rather than gradually introducing the concept over multiple instalments, have jumped straight in here with a five-player battle mode! This of course necessitated the purchase of a multi-tap but the poor old Engine only has one controller port anyway so most owners probably had one already!

It can't be a coincidence that Bomberman's sudden rise to super-stardom came shortly after the release of this game, and accordingly the appearance of its battle mode. I've always greatly enjoyed the one-player modes of the various Bomberman games but no one could deny how much fun the manic multi-player battles are. It's not the only improvement made to the series either. Some later instalments would get very creative with the stage designs from a graphical point of view and that was started here as well. The block and floor designs change with each round and new enemies are introduced every few levels too, although these are mostly taken from the previous game on the NES. The overall quality of the graphics reflects the added detail and pallette offered by NEC's turbo-charged system though and for the first time the series is looking really nice here.

There hasn't been as much of an improvement in the music and sound effects but they're still pretty good. There's lots of tunes, including one unique to each round, and they are very catchy, as is usually the case with Hudson games! Everything else is about what you'd expect here. The controls are simple and precise and the collision-detection is actually pretty forgiving. The solo game is quite easy as Bomberman games go but let's face it - as soon as the battle mode here was discovered, everything became surplus to requirements anyway! Luckily Hudson did a top job with it and there's no teething problems at all. The only reason one might play a later Bomberman game over this one is the dramatic increase in the range of power-ups available in them, but for PC Engine owners of the time, this game must've instantly become one of the must-haves for their console and made them very popular with friends too! Finally the series comes of age...