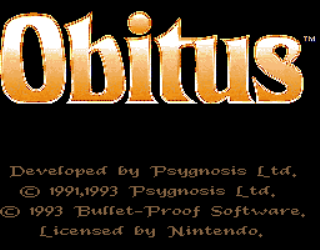 Right or wrong, certain systems are often known for one genre of game more than any other. You could say the SNES was most associated with Mode 7 or SuperFX games but for me it was RPG's. The MegaDrive had a few good ones but it couldn't compete with games like Terranigma, Secret of Mana, Breath of Fire, the Final Fantasy series, and of course A Link to the Past. If I know this, Psygnosis must've known it too, so they must've either been feeling brave or very confident to release this game on Nintendo's machine. At first glance it looks and feels more like an Amiga game so it's no surprise to find that it was originally! That's not necessarily a bad thing of course - the Amiga is home to some fantastic RPG's but are any of them really suited to what was at the time the flashiest console yet seen? 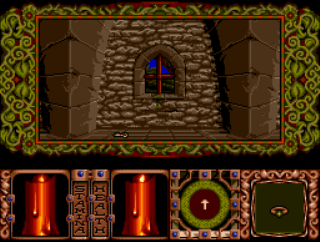 It has a reasonably intriguing, if slight odd story. It follows medieval history lecturer, Wil Mason, who's driving through Snowdonia in stormy weather when his car breaks down. Seeking refuge in a nearby deserted tower he nods off only to wake up in a strange medieval-like world. Naturally, Mr. Mason's first instinct is to try and work out what the hell's going on, and that's where you come in. Playing the game soon reveals it to be a very basic first-person graphic adventure or role-playing game of sorts but it's not really like any that I've played before. That's not always a bad thing but unfortunately, here it is. After a short text description of your current location, the screenshot to the right shows the first image that'll greet you when you start playing. After taking some time to work out the controls there's four doors to choose from. It's soon apparent you can only open one of them which takes you to Falconwood. 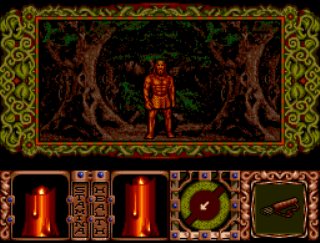 This is where things take a swift turn downhill. Falconwood is an repetitive-looking, rambling maze of a first 'stage' and gives the game a terrible first impression. Walking down its cut-and-paste tree-lined pathways is immediately boring and does nothing to entice you into exploring further. There are apparently-discarded items laying on the floor here and there including weapons and various supplies and you'll also encounter instantly agressive, Neanderthal-like enemies who apparently have no means of communicating and instead concentrate on depleting your health bar with their robot-like straight-arm punches. It's not an especially difficult game though and if you have the patience/interest to explore the woods you'll find some different areas and should make some progress. There's a bit of variety too, with some side-scrolling sections thrown in. 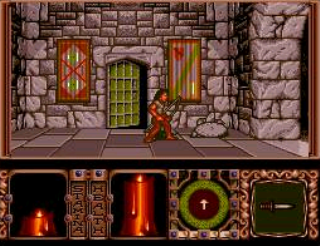 Unfortunately I've not gotten that far. Not because I got stuck but simply because I couldn't face spending more time playing the game. To my surprise, a bit of research reveals that this SNES version actually looks slightly worse than the computer versions from which it was converted (even the cool title screen is gone!), and those versions also had a far better user-interface including various command buttons. It goes with the territory I suppose, since it was originally a point-and-click game, but I'm sure a better job could've been done here. The graphics are completely mundane, repetitive, boring, and uninspiring, and the sound is practically non-existent. A good RPG doesn't necessarily need them of course (although a great soundtrack in particular can work wonders) but Obitus is poor on every level. 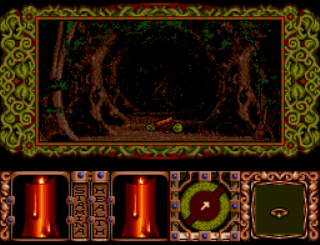 I pride myself on providing as detailed and accurate reviews as possible here at Red Parsley, even if I don't like a game, but this one just turns me off completely I'm afraid. For better or worse, I had absolutely no interest in seeing anymore of it or spending any more time trying to see if it got more interesting. It's not just me either. A brief internet search reveals a lot of venomous comments being spat in the direction of this version. Whilst it was quite highly regarded at the time, I really can't imagine having much fun with this on the Amiga, ST, or PC where it was much better suited, but on the SNES? Even a direct port would've been better but in this cut-down form it's got no chance...