Poor old Sylvester Stallone has never had it easy really, has he? He might be a bit of a mumbling beefcake but that's far from the extent of his abilities. As well as being a surprisingly talented actor, he's also an accomplished screenwriter and director as well. Sure, he had a rough patch around the time of his ill-advised remake of Get Carter, but for most of his career a 'Stallone film' has been a near guarantee of entertainment and he's rarely disappointed.

I'm sure not everyone will agree with my choices here. Yes, some of the action films he's starred in such as Cobra, Cliffhanger, Demolition Man, and Daylight are very enjoyable as well, and probably remain some of the films he's best known for, but most of them would potentially be just as enjoyable with a different action star in the lead role. The films that comprise this Top Five, however, are in my view the kind that Sly excels at and which wouldn't be quite the same with someone else starring... 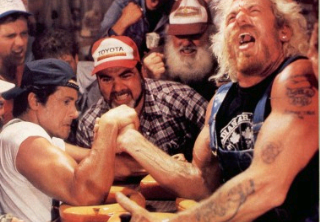 A guilty pleasure of mine back in the day, this one, plus it's a favourite of my wife's so I'm honour-bound to include it! Sly plays the splendidly-named long-distance trucker, Lincoln Hawk, who spends his time entering arm-wrestling competitions for extra cash between trucking jobs. However, his wife, who he left a decade before, is now gravely ill so he soon finds himself lumbered with their son. Cue a father-son bonding road-trip punctuated by the odd arm-wrestling competition which offers the young boy ample opportunity to cheer for his old man, which of course culminates in a final confrontation with an old rival at the World Championships in Las Vegas. Sure, it's all pretty corny and predictable stuff but Sly makes you cheer for his down-trodden losers like no one else and I just can't help but enjoy this lesser-known example. 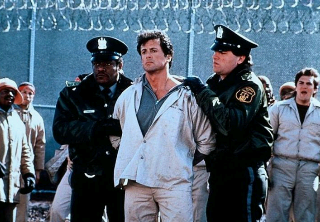 Everyone loves a good prison film don't they? Few are of Shawshank Redemption standards - not many films are, nevermind prison films - but they have the potential to borrow elements from nearly every other genre, and so are rarely anything less than entertaining. This effort sees Sly, as Frank Leone, nearing the end of his time in a minimum-security prison when he manages to incur the wrath of the prison warden. So ensues a transfer to a maximum-security facility where the warden does all he can to make Frank's life hell. I'm not sure if I'm alone in my appreciation of this film or not - it wan't exactly a smash hit - but both Stallone and Donald Sutherland as the warden are superb in their roles and help make this a thoroughly enjoyable prison film with all the usual trimmings. 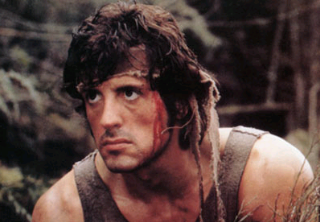 After ensuring his first franchise was well established, Stallone then moved on to what would become another of his most iconic heroes. Playing on the success of the Rocky series with its tagline, the strength of Sly's name was also enough for his script changes to be taken on board after countless other stars had turned down the role. The newly-sympathetic character of John Rambo was soon born and so too was one of the finest films of the early 80's. Thanks to Stallone's fantastic performance it's impossible not to feel for poor old misunderstood Rambo as he's hounded by an overzealous sheriffs department and equally hard not to cheer for him as he takes them all out, one at a time. 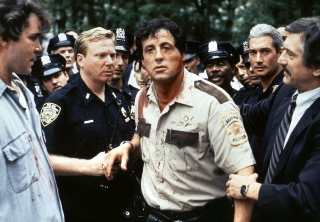 Chortles were heard far and wide when Sly was cast in this star-filled crime saga. He often (rather unfairly) gets criticised for his acting when he's surrounded by unknowns, so how can he hold his own when acting opposite the like of Robert De Niro, Ray Liotta, Harvey Keitel, or Robert Patrick? The answer is - very well! Playing the sheriff of a small town populated by the bulk of the NYPD, Sly's Freddy Heflin is polite, helpful, and mild-mannered, but is looked down on by most of the cops who live on his turf, mainly on account of his failure to become a cop himself. It's not long before corruption rears its head though, and Freddy become more and more determined to clean up his town, culminating in an explosive finale. Strangely, Cop Land was a bit of a flop but I really don't know why - it's a fantastic film and features Sly in arguably his greatest acting role yet. 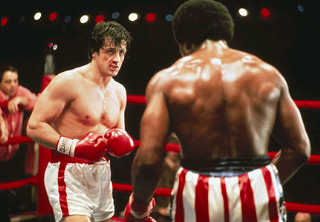 Probably Stallone's most iconic character of them all, Rocky Balboa is the ultimate rags-to-riches story and parallels Sly's own fortunes to some degree too. He wrote the script for the film himself but studios wanted to hire a big name to play the main character. Sly was adamant that the role should be played by him though, and his determination was to the benefit of the film as well as his career with it picking up ten Oscar nominations. It was made on a shoe-string budget but is still rightly regarded as the best entry in the six-strong series of films. Most of the others are good but there are few films around, even now, that manage to appeal to as broad an audience as Rocky whilst packing such an emotional punch as this original.
Posted by RetroKingSimon at 17:27