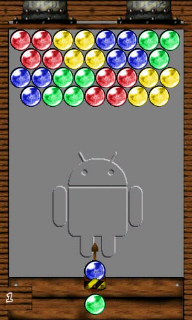 There's a good few talented individuals out there making original, brand-spanking-new games for the various mobile platforms but it's only to be expected that there's also a good few rip-offs and rehashes of existing classics doing the rounds too. This is fine, of course, as long as no one's getting hurt as they say, and the best part is - most of them are free!

Take Bubble Shoot, for example. I was just casually browsing the Android Market, looking for nothing in particular, and there it was, for no pounds and no pence! There's no prizes for guessing which game it draws its inspiration from and it's a pretty basic version at that. There's no amusing characters at the bottom of the screen and there's no fancy backgrounds either (although the original only had one really, and that was quite late on). What it does have is a handy touch-screen method of bubble placement and practically unlimited stages. Regular updates continue to add new ones and there are now literally hundreds available to play. As you might imagine, due to this the difficulty here is somewhat unbalanced with a ten-second stage following one you've been stuck on for half an hour, but it's hard to complain when it all costs you nowt.

There's rather a lot of Puzzle Bobble clones available on both Android and iPhone markets but it probably doesn't make too much different which you choose. Most of them are free and they are perfect time-wasters for the usual occasions when such distractions are welcome. The only real gripes are the game's somewhat drab looks (although fancier ones are available), absence of music, and slightly iffy bubble placement (although this really depends on how big your fingers are!). It's still a entertaining and addictive game though, and there's not too many people who wouldn't get some sort of enjoyment out of the colour-matching bubble-popping action here.