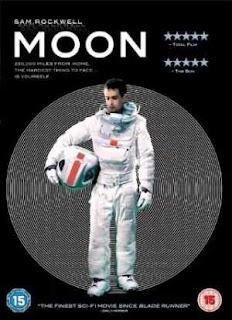 I don't know what it is about science-fiction films but they seem to have a funny way of alienating certain people. I know a couple of people personally who won't even look in the direction of a film if they believe it has anything remotely to do with space. I suppose they narrow-mindedly assume that it'll be some far-fetched laser-blasting alien war type scenario and that they'll instantly become 'infected' by geekiness if they watch it. Genre prejudice or not though, some sci-fi can be pretty cringe-inducing I must admit, but it's not all like that. Many examples can be just as gripping and entertaining as any Earth-bound film and some don't even feature much of that scary 'space' stuff. Moon is one of these films.

As the name suggests, the film is set on our only natural satellite, the mysterious Moon. It's the year 2036 and mankind's energy needs are now catered for by the extraction of Helium-3 from the sun-drenched surface of the Moon. Working from the largely-automated 'Sarang' base on its surface, Lunar Industries employee, Sam Bell (Rockwell), oversees the unmanned 'harvesters' and periodically sends full containers of Helium-3 back to Earth. Much to his relief, he is nearing the end of his three-year stint in sole charge of the base and is looking forward to rejoining his wife and young daughter. After such extreme isolation with only an artificial intelligence computer named GERTY (Spacey) for company, Sam begins to fear for his own sanity.

The films begins with a voiceover which neatly sets up the isolated base up on the far side of the moon and it's here where we soon find ourselves. We spend a short time watching Sam going through his daily routines such as tending his plants, carving small wooden models, receiving messages from home, and even the odd bit of work including driving across the Moon's rugged surface in one of the big monster truck-like rover vehicles to retrieve full Helium-3 containers from the harvesters. It soon becomes apparent, however, that the extent of Sam's isolation has begun to effect him. With no live video link with Earth available thanks to a perpetually damaged satellite, his only contact with other people comes in the form of short recorded messages which GERTY plays for him, but they are few and far between. He talks to himself and has even started seeing things, but things really start to change after he has an accident in one of the rovers.

I knew Moon was very well-regarded before I watched it but I intentionally found out as little else about it as I could. This turned out very well for me so I'll reveal as little here as I can as well. One thing I will say is that Sam Rockwell puts in an absolutely superb performance. I don't think it's spoiling too much to say that he completely dominates the screentime, but having only seen him in more light-hearted, comedic sidekick-type roles prior to this, such as in the outstanding Matchstick Men, I was unsure how he would handle not only being the leading man, but being THE man! My concerns were unfounded though and I think most viewers will be hugely impressed by his turn here. The sense of loneliness he puts across is genuinely affecting and it's hard not to feel for him when it finally gets to him.

I suppose it would effect people in different ways but it's hard to think of a more desolate or isolated place than the Moon. It's not like he can just give up, quit his job, and decide to go home. He doesn't spend the time entirely on his own though. There's some flesh-and-blood company of a sort but the ever helpful GERTY is always on hand to help him out or give him a pep talk too. Actually, I must admit, when I first saw him, complete with assortment of mood-indicating MSN-style smiley faces, I did for the briefest of moments suspect a HAL 9000 type scenario, especially since he's voiced by Kevin Spacey, but Moon is a more intelligent film than that. It pays its respects to Mr Kubrick's masterpiece, and a few others like Solaris, but it's very much its own film, exploring some interesting themes and asking some profound questions.

It's not often that a film like Moon comes along. Perhaps rather surprisingly it's a British film. It was made with a low-budget and received a limited theatrical release which is a real shame. As haunting and atmospheric as it is on the small screen, I imagine it would've been a lot more entrancing on the big screen, and the immersive soundtrack composed by Clint Mansell (Requiem for a Dream) would've been all the more poignant. It certainly isn't everyone's cup of tea - I know at least a couple of people who don't think much of it, but if you're like me and enjoy a slow-paced but always intriguing film, with a bit of mystery, that stays with you long after the credits roll, then do yourself a favour - find out nothing more about it, go and buy it, and watch it - you'll love it.