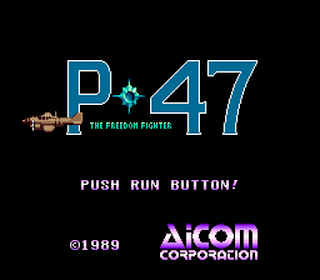 Whilst undoubtedly being a source of untold horror and sadness for a majority of the participants and their loved ones, the two World Wars (so far) have provided more than ample opportunities for video games, and specifically ones where you are charged with shooting stuff. Nowadays, of course, these are invariably realistic and complex First-Person Shooters with lots of intricate, 'proper' missions, squads to command, etc, but in the days of yore they were more often far simpler vehicular-based shmups. A majority of these were vertically scrolling ones such as Capcom's superb 194x series but P-47 is one of the few side-viewed offerings. Placing you in control of one of the USAAF's famed P-47 Thunderbolt fighter-bombers, the object, predictably enough, is to single-handedly take down the German army and air force over Europe during World War Two. Sounds like a piece of cake... 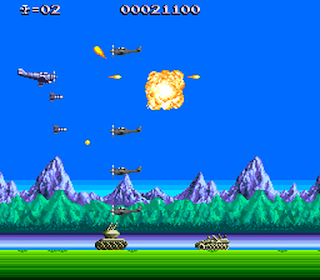 There are eight stages of Nazi-filled action between you and final victory and as usual you'll get thrown straight into the thick of the action. Your rather slow and weedy P-47 fighter comes under immediate attack from scores of enemy aircraft as well as lots of tanks and gun-emplacements on the ground. Some of the downed enemy planes and helicopters (actually, I wasn't aware of many attack choppers being used in WWII) leave behind power-up icons which, rather than replacing your standard shot, are added to it as a secondary weapon. These include bombs, spray missiles, multi-missiles, directional-shot, and of course the usual speed-ups and extra lives. Each of the weapons can be powered-up by collecting successive icons too, but if you get a different weapon, it will always be at the weakest level, even if it replaces a powered-up one. Bah! 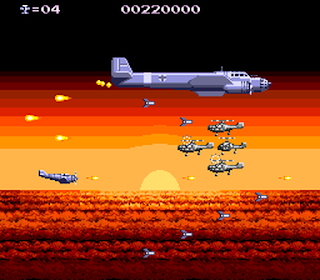 Besides featuring what could be a somewhat exaggerated German military, the stages are pretty much the kind you would expect, given the scenario in question. They alternate between slightly-above-ground stages (the ones with all the tanks and stuff) and higher-up stages amongst the clouds (which replace the ground-based assault with some larger aircraft), and with a couple of exceptions they all look pretty similar to each other aside from the colour schemes used. These were presumably chosen to indicate different times of day. For example, as well as the normal stages, there's a lovely-looking sunset stage and a couple that take place at night, and despite the actual scenery and enemy sprites changing little through the game, these different colour schemes do give the game a pretty interesting and varied look. There is also a sea-based stage which includes lots of gunboats as you might expect and each stage culminates in a boss-fight which are generally larger air-fortresses, tanks, or battleships. 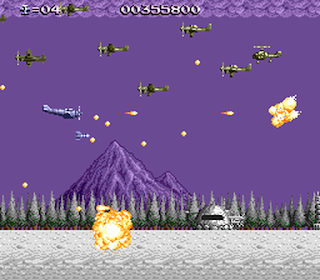 Some of the backgrounds are a bit drab but they're not bad, and the sprites are nicely detailed. The weapons aren't very spectacular but they are well-varied. Each has its good and bad points and they are all useful in one situation or another, and the bombs are particularly satisfying! The music and sound effects are decent enough too without ever causing you to stop and take notice, and that sums up the whole game really. It's not spectacular in any way and most aspects are little above average but I still really enjoyed playing it for some reason. It has a great difficulty curve - enemy bullets are easily visible but their numbers, as well as the craft firing them, does gradually increase, and the game can get pretty manic! P-47 may not be the best or flashiest shmup on the Engine, but it's a very enjoyable, no-frills game which is well worth giving a try.