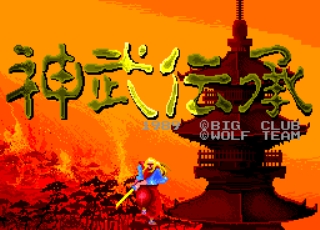 Any Space Harrier fans here? Good. Now, imagine playing that great game but without the benefit of the invisible jetpack. Sound good? I'd have to agree with you if you're sceptical but that's exactly what we've got here from Big Club / Wolf Team. Yaksa, as I knew the game until now, is apparently a little-known game which I remember reading a scathing review of in C&VG magazine back when Mean Machines was just a humble little section in the back of the mag, and it's another one I've often wondered about. It's comparisons to Sega's mid-80's classic are understandable. Both games place you in control of a lonesome fellow who must advance into the screen, faux-3D stylee, and take out hordes of attacking enemies. The main difference between the games is the setting. 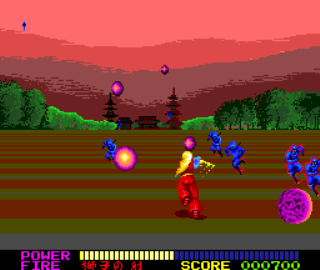 Space Harrier, as might be obvious from its name, is set on alien planets in the future. Yaksa appears to be set in Japan's past and its hero is a samurai who, unlike Mr Harrier, does not possess the gift of flight. He must run or jump into the screen and, initially at least, is armed only with a sword. The advancing enemies include the likes of ninjas, obviously, but also many types of scary and mythological creatures such as skeletons, jakis, dragons, and ogres. Most of them send volleys of bullets in your direction and this is where the game's main problem lies. The bullets are big and often cover much of the screen. This combined with your character's limited movement means it's very difficult to avoid them most of the time. He can stop running at will, and even run backwards for a short distance, but this still unfortunately makes Yaksa a difficult and frustrating game. 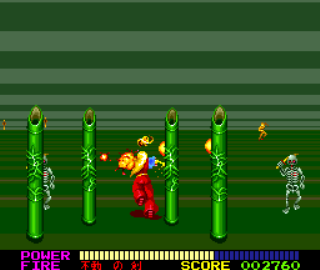 There are seven stages in all, set over typically varied terrain, and the graphics are actually pretty nice. The first stage is a sunset sprint across a barren plain and is a reasonably uncomplicated introduction to the game. After this you'll move on to a bamboo forest where things already get noticeably tougher. Here, as well as the continuing enemy onslaught you'll also have to contend with annoyingly-positioned bamboo poles which bar your progress. After this things start getting really stupid. The third stage is set in "The Land of Deadly Water" which, as you may have guessed, it a water stage. The water harms our heroic samurai, of course, which means you have to cross the stage on floating platforms which are often very hard to jump onto. Plus, once you're on them, it leaves you with almost no space to dodge the enemy attacks, and that's assuming you even manage to stay on them at all! 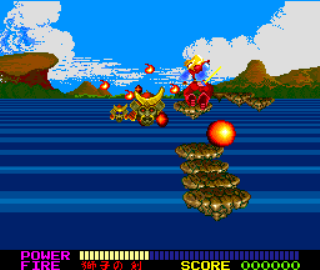 To be honest, I didn't even get any further than this and I had little desire to try. There are power-ups that can be collected which upgrade your sword to fire projectiles, and this does make the going a little easier (while you have it), but Yaksa is never a particularly entertaining game. The graphics are nice enough and there's a decent soundtrack (you can listen to this on the title screen - it's almost as if the programmers knew you wouldn't get far enough to hear all the tracks!), but the gameplay is just too frustrating. The rather iffy collision-detection doesn't help matters and trying to avoid enemy attacks feels more like an ordeal than an enjoyable challenge. It's a shame too as the basic idea behind the game has potential and this could've been a much better game with a bit more thought.