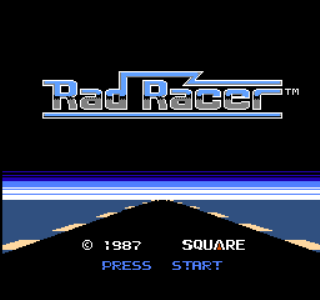 In 1986, Sega did more than just release OutRun - they completely revolutionised the racing game genre itself. Over the years Nintendo have established themselves as the innovators of home gaming but in the comparatively early year that OutRun appeared it was clear that their console didn't have an equivalent. Luckily for them, Square were on hand to quench NES owners thirst for this newly popular genre and the result was... Rad Racer! Interestingly, it was developed by the same team who would go on to create the revolutionary (and company-saving) RPG, Final Fantasy, but fret not - there's no random battles or magical monsters here. In fact, it's about as far from that fantastical world as you can get. Accordingly, it's a game that's predictably short on story or exposition but it does offer an opportunity to drive fast and recklessly and little else. But that's often enough... 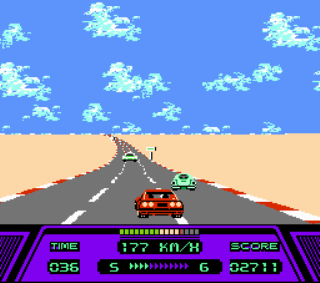 Like most driving games from this time the object here is simply to reach progressive checkpoints before your time expires. Before starting you can choose between a Ferrari 328 or an F1-style car but the choice is purely an aesthetic one - if there is any difference between them it's too small to notice. After you've chosen it's merely a case of charging through the course as quickly as possible. There are eight in total and each is filled with many civilian cars which inevitably get in your way of course, but I guess it would be pretty boring without them! The form they take is determined by your own choice of car. In other words, if you choose an F1 car, they will be driving similar cars, but again - it's just for visual effect. Obviously contact with other cars will slow your progress and hitting any of the roadside objects, such as signposts or trees, will result in a crash, but the real challenge here is the sharp corners the courses often throw your way - you actually have to use your brakes here! 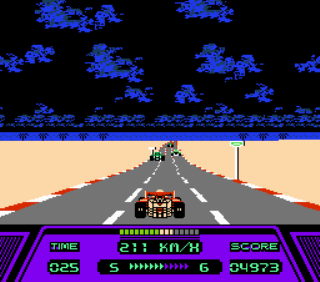 I don't know about being 'radical' but if there's one thing that Rad Racer is definitely not, it's original. It was inspired by OutRun and that's pretty obvious from the off. Aspiring to be the best is no bad thing though and Square have given it a pretty good shot with this game. The music and sound effects are average at best and the graphics aren't amazing either. The roadside is pretty bare most of the time and the game has trouble displaying multiple cars at close range. The scenery is rather uninspiring too, although there are a couple of nice night-time stages while the first changes from day to night while you're racing. However, I'm guessing these were sacrifices made to accommodate the game's biggest plus point - its impressive sense of speed. The draw distance is also good, allowing you to see cars coming from a long way off. 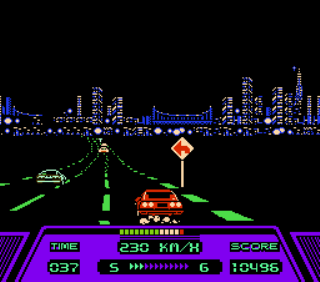 The courses do not feature OutRun-style forks - it's just point 'A' to point 'B' here but they are populated by quite a number of other vehicles and weaving around them at the speeds this game offers can be very entertaining, although it can be annoying if you get boxed-in! The only hint of innovation Square have offered is in the optional 3D mode which can be toggled via the 'select' button and viewed using the glasses that accompanied the game. With or without them though, this is a fast and enjoyable OutRun clone, but is it better than the real thing?
Course not, what is?!