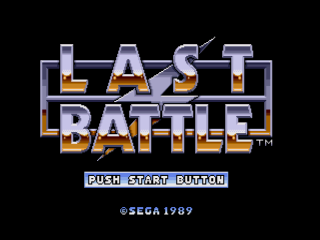 Whether you're an oldie like me or a young whipper-snapper, I'm sure if you're a gamer, especially one with limited resources, you regularly check out reviews of games for your system(s) of choice. If one gets great reviews you'll probably buy it, or at least want it, but if one gets bad reviews you'll probably avoid it like the plague. That was certainly the case with me when I was growing up. There's lots of average or good games that I haven't gotten around to playing yet or course, but when something gets universally slated it's a name I remember but never want to play. But could the magazines have been wrong? In this new Red Parsley feature I will bravely take a look at some of the games I thought I'd never play to see if they really are as crap as they're supposed to be. 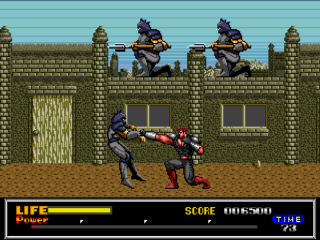 As you may have guessed by now, the first crap game I've decided to look at is Last Battle which was a launch game for the MegaDrive here in the UK, and considering the strength of the launch line-up, the game already faced a uphill battle to win any fans. The Japanese release of this game was part of the Fist of the North Star series but here it was just a plain old scrolling fighting game. Though apparently not relayed in the accompanying documentation, the game does have a story told through an intro sequence and cut-scenes but all you need to know is, it's up to you, as Aarzak, to save the world by kicking the crap out of everyone. The action is set over four chapters, each consisting of numerous timed stages, and you can choose your own route through a chapter from the between-stage map screen. 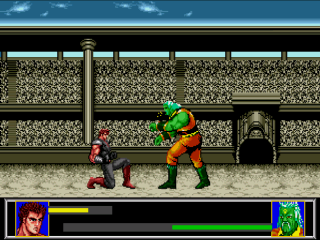 Most of the stages will see Aarzak walking from left to right, which he does agonizingly sloooowly. While he's trudging along, enemies will attack him from either side which he must dispatch accordingly using his extensive range of combat moves. These consist of a punch and a kick, and landing a single one of either will see the recipient fly off the screen. At the end of most stages you'll encounter a friendly character / groupie who offers some motivational gems such as "Aarzak! Save the World!" before you can choose the next stage which will either be the same sort of thing as before, a boss fight, or a dungeon stage which features various traps and doorways which you must muddle through until you find the exit. Aarzak has a life-meter which is obviously depleted by enemies, but he also has a power-meter which is filled by doing the opposite, i.e. smacking up the enemies! Once it's full, he'll have the advantage of more powerful attacks for the remainder of the stage. 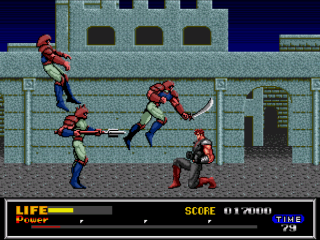 As you might've guessed, Last Battle is in fact as crap as I always feared it to be. It's not really any one fault either so it's hard to justify. The graphics are repetitive and uninspiring with boring backgrounds, and samey, poorly-animated sprites, and the sound is little better. The game is also too hard. This is partly because once Aarzak's life-meter has been emptied it's game over. No lives, no continues... that's it! This wouldn't be so bad but the collision-detection is poor, the controls sluggish and frustrating, but most of all, it's just no fun to play. Quite the opposite in fact, I had no desire to continue playing this after the first stage (although I had to so I could get screenshots - aarrgghh!). I can just imagine jumping around these stages as Axel from Streets of Rage kicking the living crap out of all these buffoons without even taking any damage, but with this character and these controls? Forget about it! I don't like to bash a game too much but the only good points here really are the map screens with their alternate routes. There were plenty of must-haves at the MD's launch like Revenge of Shinobi, Thunder Force 2, Ghouls 'n' Ghosts etc, but arguably the only must-not-have was this unpleasant title.