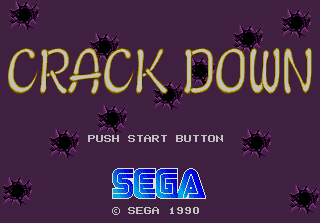 Those infernal mad professors are a right pain in the arse, aren't they? Always deluding themselves that they're the best leader for the world and bollocks to everyone else. Then again, I suppose if it wasn't for them, all the many selfless, heroic American government agents wouldn't have any opportunities to show us all how brave and daring they are by saving our worthless behinds and would instead be reduced to sitting around eating pizza. Luckily for Special Service agents, Ben and Andy (must be their special covert operative names), but unluckily for all us non-hero types, Mr. K has unleashed his army of killer robots equipped with advanced artificial intelligence to rid the world of pesky Humans! Can Ben and Andy save us all from Mr. K's diabolical scheme?

Instead of trying to arrest Mr. K and use his Artificial Life System for the greater good though, the tactic the Federal Government has instead opted for is to infiltrate his 'chillingly futuristic city' and destroy it along with its creator by planting 'Clystron' bombs all over the place. Mr. K's city is viewed from directly overhead and divided into four levels, each composed of four maze-like stages which are swarming with many different kinds of robots. These are not your primary target, however. The object of each stage is to lay bombs on each of the spots marked by a red 'X' which is done by walking over them. You have a fairly strict time limit of two minutes and thirty seconds in which to achieve this, and, once all bombs have been set, you must make your way to the exit before they explode. If the time expires, the bombs that you have already placed will blow up, destroying the level and anything still in it - including you!

The robots that populate each stage come in many shapes and sizes and most have their own method of attack. Some of them merely try to punch or slash you, others shoot you with standard guns or canons. Some even have flame-throwers or chainsaws! Adding to this problem is that the enemies are infinite. They are produced by generators, in a similar style to Gauntlet. The vital difference here though, is that you cannot destroy the generators. For this reason, a combination of speed, stealth, and strategy are far more effective than running around shooting at everything that moves. If you do that, not only are you far more likely to be killed but you'll also run out of ammo pretty soon too! When it's necessary to take some of them out though, your choices are limited.

If you're close enough to an enemy you can punch them but more often than not you'll need to shoot them. Your arsenal consists of a standard pea-shooter gun, a much more powerful canon (which can go through more than one enemy at once), and screen clearing super-bomb's, all of which are, of course, in limited supply. Luckily, the stages are littered with icons which replenish your supply. Ben and Andy are rather fragile Special Service agents though as they die after only one hit. This is another reason that sneaky shooting is the best way to make progress. Most of the enemies walk around the stages as if on patrol (which they probably are). The trick is to lie in wait until they emerge from a passageway and that the first thing they walk into is one of your bullets, or to creep up behind them and punch them (which kills them just as effectively as a bullet, sometimes better). If you're really crafty, you can get them to shoot each other!

When you are fired upon, the best idea is obviously to run away! If this isn't possible (i.e. if you're in a narrow passageway or something) you can take evasive action by laying flat against the nearest wall until the bullet or missile has passed. This gives the game one of its most outstanding qualities - whether you do well or badly is almost entirely dependent on your skill rather than luck as every enemy attack is avoidable (except for some REALLY annoying laser things on level three). The increase in difficulty is gradual as well so it's a very fair game for the most part. Things do get quite tough later on though. The time limit is pretty tight and later stages have some tricky obstacles and traps such as electrified floors, conveyor belts, and pits of lava or acid.

The only real bad point to this game is one you may have noticed from the screenshots. It seems clear that Crack Down was designed as a two-player game but rather than feature a large playfield in which multiple players are forced to stay close together (like Gauntlet), it features a separate playfield for each player. This is great in two-player games as it allows each player a lot more freedom but when playing alone, instead of increasing the size of the playfield accordingly, the game uses player two's playfield to display an inventory of that stage's enemies (the arcade version just says 'Insert Coin' though, so at least Sega put something there!). As you might imagine, this means there is little screen space devoted to the single player game, especially considering at least one third of the screen is occupied by the (admittedly useful) map and status bits and pieces.

The graphics also suffer somewhat due to this as the meagre percentage of usable screen space means that everything is rather on the small side. The arcade version was the same though and while there's some animation missing and the sprites, whilst still distinctive, are a little less detailed, everything here is pretty faithful to its parent. There is some slow-down though, which is hard to forgive, and it's definitely not one of the MD's best looking games. The sound effects aren't bad and the music is actually pretty good, featuring lots of tunes, many of which are memorable. The stages aren't enormously varied but they are enjoyable and satisfying to play though. Sneaking around taking out the stupid robots is great fun and is a perfect blend of action and strategy. I'm pretty sure this was never a particularly popular game, probably because of the tiny, almost 8-bit quality graphics (which doesn't bother me personally but I can see why it might prove irksome), but it offers a fairly unique and highly enjoyable take on the overhead run 'n' gun game. Give it a try!