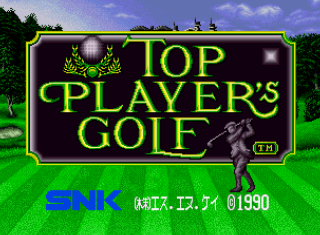 I can certainly see why they wouldn't appeal to everyone but I really enjoy a good golf game now and then. Not the kind that takes an hour to set up a shot of course, I'm not that serious about them, but arcadey ones or, even better, those Japanese anime-style ones are fantastic fun and a welcome break from fast-paced shmups or racing games. I already have a few favourites games of this type, including another for SNK's splendid console, but this series of features will hopefully uncover more for me to enjoy. This one, an early release for the Neo Geo arcade and home system, is certainly arcadey by its very nature, but that doesn't necessarily mean it's good. 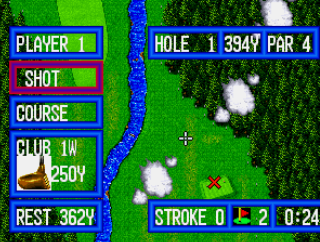 It's certainly a by-the-book game. There are three play modes to choose from before play begins. The first is Stroke Play, which is basically a practise mode for one player, the second is Match Play, which is a tournament mode, and lastly there's the Nassau Game, which is similar to the Match Play but with an additional scoring system. Both these last two modes are played either against a second player or against a computer opponent and all modes can be played on either of the two courses available - the Top Player's Country Club and the SNK Championship course. There are also four fictional players to choose from but to be honest, it doesn't seem to make a great deal of difference which you choose! Each character makes their way through the eighteen holes of each course by using the same very basic interface. 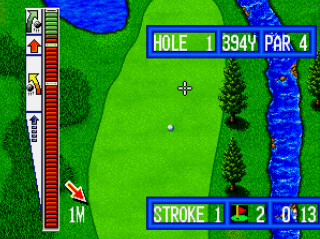 You'll obviously start at the tee where you can aim a crosshair to determine the basic direction of the shot, but it's a good idea to first make use of the 'course' option on the side of the screen. As well as giving you a look at the green, this will give you an overall view of the hole (giggity) you're faced with from which you can more accurately plot the course of your shot. It's also possible to change your club at this point before selecting the 'shot' option. This will bring up the the basic power gauge. The gauge will quickly fill and in order to hit the ball with maximum power you'll need to stop it at just the right point. Too soon and you'll hook it, too late and you'll slice it. Of course, aside from the tee shot, you may not need to use full power. In this instance you'll have to try and work out how much of the power gauge to use, and it's not easy! 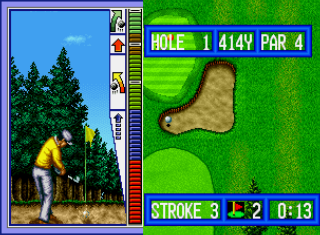 That's where the main problem with this game lies. An arcade game it may be, but it's a bit too basic for me. It's very hard to determine the path of your ball most of the time nevermind establish a desired landing spot which can make for a pretty frustrating game. If the cross hair denoted the landing spot (given an ideal hit) rather than merely indicating the general direction, it would greatly help matters, as would some sort of distance measurement on the power gauge, but most of the time it's guess work and that's no way to play a golf game, even an arcade one. The presentation isn't bad and there's a caddy you can consult before each shot but that's where the positives end really. The music is unremarkable, though fairly catchy, and the graphics are pretty poor, even for one of the first Neo Geo games. That stuff doesn't really matter too much with a well-designed golf game but unfortunately, this isn't one.