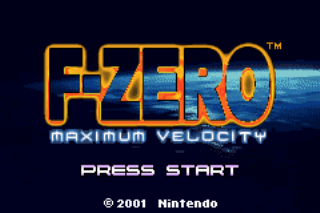 The original F-Zero was widely credited with kick-starting not only the futuristic racing game sub-genre, but also arcade-quality racing games on home systems generally. The acclaim it received was well-deserved too - it was fast, exciting, and original. It was also a launch game for the SNES and did a perfect job of showcasing Nintendo's new hardware, so when the time came for another of their new hardware releases, what better choice of game to entice prospective buyers? So, the release of the much-anticipated Game Boy Advance was duly accompanied by this, the third full release in the F-Zero series (discounting the 64DD's Expansion Kit), but could it do for the GBA what the original did for the SNES? 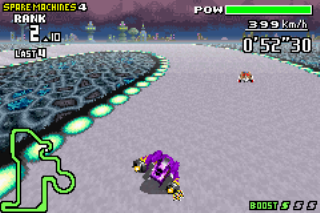 The swanky new Game Boy may have featured new hardware but it was still never going to be able to host a game like the mighty F-Zero X, so instead Nintendo returned to the style of the SNES game for this release. As such, there are again four 'machines' to choose from initially and they can be used on the Training Mode (time-attack, basically) and Grand Prix Mode, and there's also a Multi-Player Mode that lets four players race via link-up, even if only one of them has the game cartridge. The game does have severely limited options in this case but it's nice to have the choice! The Grand Prix mode is where you'll spend most of your time though and it's very similar to the one found in the SNES game. 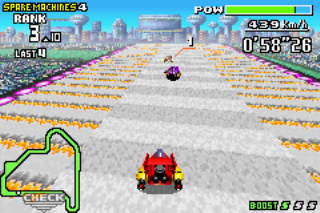 There's three race 'series' to choose from - Pawn, Knight, and Bishop, and each consists of five courses. Each is contested over five laps between you, in whichever machine you selected, the remaining three machines under computer control, and various computer drone vehicles. Each lap has a progressively higher rank limit which must be met or exceeded. If you finish a lap outside of the limit you'll be disqualified, and the same fate awaits if you fall below 20th place at any time. Fortunately there are three difficulty levels for each series (Beginner, Standard, and Expert) and a fourth (Master) becomes available if you complete a series on the highest. If you manage to finish all three series' you'll unlock the feature-packed 'Championship Circuit', but even more splendidly, if you finish all the series' on Expert difficulty, an additional series called 'Queen' will become available featuring five more courses. 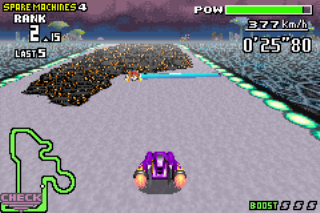 It's also possible to unlock up to six new machines by completing the classes in various difficulties and, like the first four, each differs in its acceleration, max speed, boost speed, boost duration, body strength, turn performance, and balance. A boost is gained each time you finish a lap and they can be used at any time you wish. If you've played F-Zero before I imagine everything sounds very familiar to you so far, but there is one new feature added here. When I first played this I was disappointed to find the machines all slipping and sliding around all over the place the moment I tried to turn a corner. I soon learned that this is because the controls have been tweaked. Now, when you turn a corner, in order to retain some degree of grip, you need to rapidly press the thrust button. Considering you often need to do this in conjunction with the shoulder 'banking' buttons, it can take quite some getting used to! 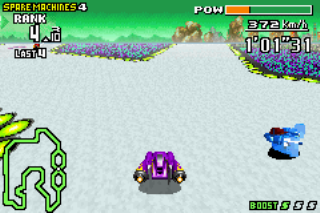 Of all the many similarities between this and the first F-Zero game, none is more immediately obvious than the graphics. The machines and circuits are of different designs of course, but as you can probably tell from the screenshots, they are of a very similar style including the latter being totally flat. In fact, if it weren't for the slightly lower resolution here, this could easily look like another one of those Satellaview updates! The sound is also similar to the original. I don't really like the effects much but the music, whilst not as distinctive or catchy as the SNES game, is still pretty decent. The courses are all new (and have somewhat un-F-Zero-ish names) and are full of familiar features, but they're probably trickier than those in the original. 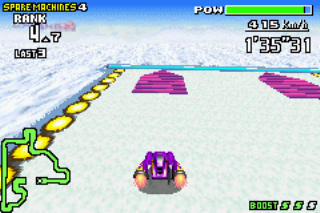 The difficulty increase is partly because the courses are packed with more features, including the usual assortment of slow-down and damage areas, mines, ramps, etc, but the machines are also a little harder to maneuver around them due to the aforementioned controls change which is definitely the biggest difference between the games. For me, the SNES game was completely original, not to mention unexpected, so none of the sequels were likely to have anywhere near the same sort of impact. Maximum Velocity is very much 'more of the same', but I have to confess I didn't like it quite as much, mainly due to the courses which aren't as well-designed or memorable as F-Zero's. It's still a superbly enjoyable game though, especially as you can now play it on the toilet or train, and was an amazing launch title for the new Game Boy. A few more tweaks and it could've been stunning but if you're a fan of the SNES game, you'll still definitely get a kick out of this.