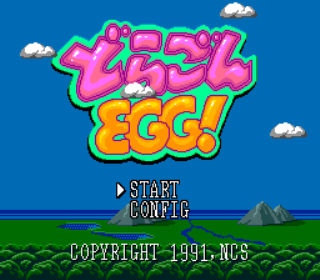 One thing I love about delving into the mysterious realms of Japanese gaming is discovering another of the many hidden gems that were, for some bizarre reason, never released outside of their native territory. It's not without its frustrations either, though. This is mainly down to problems presented by the language barrier. Some games, RPG's for example, are pretty much rendered totally unplayable as you might imagine, but sometimes even relatively simple platform games like Dragon Egg can't be fully understood either. The game is perfectly playable and features little text beyond the intro sequence, and yet the premise behind the game remains a mystery. It seems some terrible creatures were summoned by a dark power and let loose upon a peaceful land but I couldn't be certain. All I can tell you for sure is, there's a little girl and she has a backpack, and nestling atop this backpack is an egg. 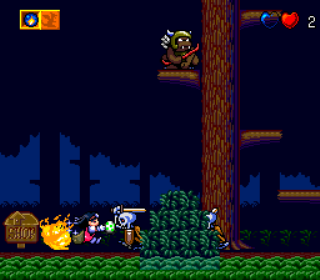 Standing between her and the presumed banishment of evil and the restoration of peace to the land are six side-viewed stages, each comprising of several sections. These stages are set in a variety of locations including a forest, a castle, a desert, and even a space station of some sort (complete with teleporters of course), and they are all filled with evil monsters such as skeletons, ogres, pigs, blobs, and flying trolls and insects, as well as lots of traps and obstacles such as moving or collapsing platforms, fire, and force-fields. All of these enemies and some of the traps deplete our young heroine's life meter (represented by hearts) but fortunately she is fairly agile and can jump around the multi-tiered stages quickly to avoid many of them, and to retrace her steps if she falls down from a high section, for example. She has a more interesting way of dealing with the many monsters though. 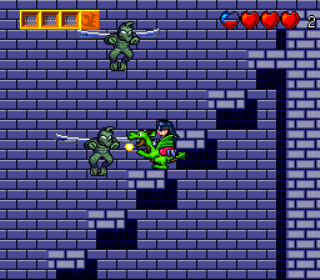 It is here that we return to that egg nestled in her backpack, and indeed the egg of the title. To begin with she, perhaps rather unwisely, uses the egg itself as a weapon, bashing the enemies with it until they die, leaving behind a coin. Some random enemies, however, will leave behind a power-up instead. Once you've collected two of them, the egg will hatch into a baby dragon. Now when she thrusts him towards the enemies he scorches them with his fiery breath! Collect two more power-ups and he leaves her backpack altogether and becomes big enough for her to ride on his back. At this stage he can spit small fireballs which are enough to deal with most enemies but he can be powered-up even more to fire bigger, more powerful fireballs and even offers improved jumping abilities. Other power-ups can occasionally be found laying around here and there but can more reliably be purchased in mid-level shops with the coins gathered from defeated enemies. These include a 'cure', which replenishes her health, another heart to extend her health capacity, a shield, and several others. 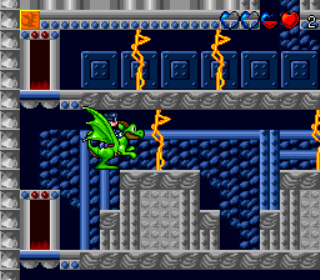 So, I've no idea who this little girl is or why she's carrying a dragon egg around, but luckily it doesn't detract from the enjoyment of the game, and enjoyable it is too. The stages are nicely designed and fairly varied in their appearance and everything is fairly cutesy as you probably guessed. The music and sound effects are nice and the sprites and backgrounds are nicely drawn too - there's even a wibbly graphics effect like a water version of Thunder Force 3's fire stage! It's great fun jumping around the stages and spitting fireballs at all and sundry too, the controls are tight and responsive and there's seldom an unfair death. In fact, that's probably the game's biggest problem. Not that it's fair I don't mean, unfair games are annoying as hell, just that it's a touch on the easy side. Neither is it a particularly big game and could be comfortably finished inside 30 minutes. It's a lovely little adventure while it lasts though. It looks and sounds nice, and is very enjoyable to play though, but just make sure you set it on 'hard'!