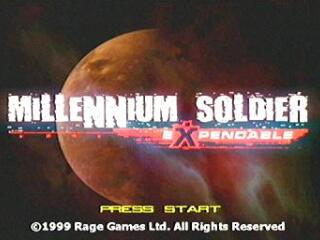 When Sega launched their magnificent Dreamcast console it was accompanied by some pretty decent and varied games. Nestled amongst the amazing, big name, flashy 3D next-gen games were two offerings from Rage Software. One was Incoming, itself a flashy 3D shooter, but hardly next-gen as far as originality or gameplay innovations were concerned. The other, known simply as Expendable in the US, was a little more unexpected. Here was a game that was more like a late 80's Commando-style run 'n' gunner and, which is fine as part of a console's library, but as a launch game for the most amazing console to date? Well, it was actually a PC game originally, released during the post-3D accelerator card craze. Due to the Dreamcast's technical similarities to the PC's of the day, it was an easy recipient of quick ports. Was Expendable just here to make up the numbers? 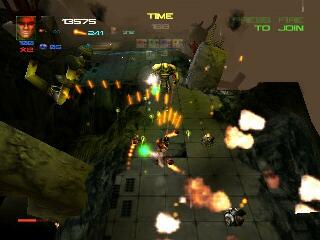 Millennium Soldiers are fighting machines, Human in appearance and cloned in their thousands to fight against an alien invasion, and they are .... expendable. There's a bit more to the story than that though, and it unfolds throughout via numerous cut-scenes. After a short but amusing introduction sequence you can choose from three difficulty settings and then plough straight into the action. The game is viewed from an angled overhead perspective and consists of twenty levels. Each one is set on a different planet crawling with evil aliens beasts and also features a middle-level boss, and of course an enormous end-level boss. Your soldier, who you can control using either the digital or analogue pad, can run and shoot in eight directions and can strafe left and right. This means that you can move around while always shooting in the same direction which is a very useful feature when fighting some of the more powerful aliens, especially the bosses. 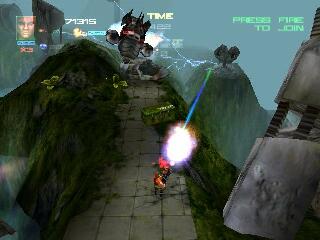 The object of each level is sometimes to find certain items, but more usually to clear it of the alien interlopers by shooting the crap out of them. This is achieved by making use of the various weapons available - fifteen in all. Some examples of the type of firepower you can expect to be packing are Gatling guns, cannons (which can be upgraded), lasers (which can be upgraded to three-way and five-way), guided rockets and flamethrowers. You also get a limited number of more powerful grenades at the start of the game, though you can of course pick up more. One useful power-up available is the laser-sight which not only looks cool but also works really well with any of the weapons. It doesn’t last forever though, so make good use of it while you've got it! 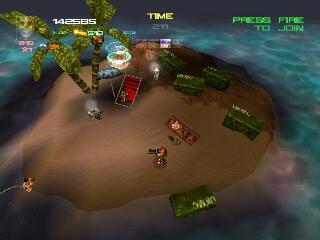 I guess part of the reason that Expendable was selected as a launch title is because it's a two-player game, but also because of its graphical splendour. Yes, it's pretty old-school with regards to the kind of game it is but it was also a good one to show off the technical abilities of your new Dreamcast. The backgrounds, whilst mostly dark and gloomy, are nicely detailed, and each is filled with the lovely lighting effects that adorn the levels resulting from weapons-fire and the large explosions which erupt every few seconds. A majority of them are caused by you too - most objects in the game are destroyable and many of them contain additional weapons or ammunition. This is also one of the games two problems - there are so many explosions, and they are so large, that it's often difficult to work out what's going on, especially with two players at once! 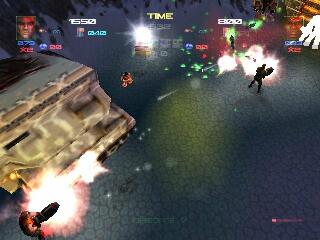 The two-player mode can also get a little confusing. To achieve the best results both players should stick together and work as a team, but amidst the carnage this sometimes makes it difficult to work out which soldier you're controlling. The other problem is the time limit. It's pretty tight, especially if you're a thorough gamer like me - there's not enough time to explore and find all the secrets, and if you're up against a particularly large, vicious enemy force, you have no choice but to steam straight in shooting the place up and taking a fair bit of damage in the process - there's not enough time to hide behind things picking them off one at a time. If you're into that kind of gameplay then great - you'll probably love this game, but I'm not so I don't. The camera angles are sometimes a little jerky and confusing too but that's the only real negative point, graphically. Some enemies are massive like the big ship that knocks buildings and stuff out of the way and proceeds to vaporise the ground before you on level one! 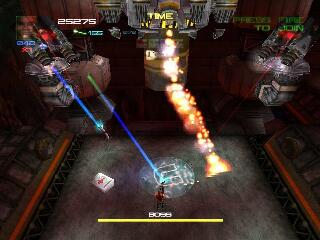 The music is sombre and moody and, while certainly not the kind of music you'd play the game just to hear, suits the action well. Sound effects are superb throughout - shooting noises are loud and arcadey, and the noises the aliens make when they die is effing brilliant! Actually, that's the most annoying thing about this game for me - there's a lot here that's great and it can be enormous fun, it's just ruined by a couple of flaws. Expendable is about the closest many gamers will come to playing old favourites like Smash TV and Contra on the Dreamcast, so fans of those games, providing the sometimes-confusing graphics and tight time limit can be tolerated, should purchase this straight away. For everyone else though, it's definitely a try-before-you-buy. It looks good, sounds good and plays nicely, but may ultimately prove too frustrating.