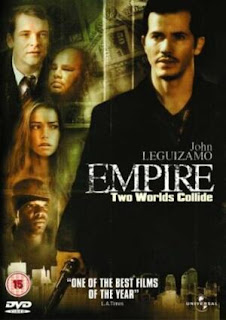 It's not often that I go trawling through bargain bins for DVD's, especially in cheap supermarkets, but on one occasion, probably more than two years ago now, I did just that and spotted two films that looked like they might not be the utter tripe that usually fills these baskets. One of these was Empire, which as I recall cost me the princely sum of £2. However, still nervous about the source of these films, they've sat on my shelf at home until now, untouched. I kept meaning to watch them but... well, you know, something better always came along. However, at the urging of my wife, we finally sat down to watch one of them and selected this one. Despite the decent-looking cast list, I was braced for the worst though.

The story is mainly set in the South Bronx area of New York and revolves around Victor Rosa (Leguizamo), a successful heroin dealer. He and his crew, Jimmy (Laresca), Chedda (Treach), and Jay (Baez), share their 'turf' relatively peacefully with three other dealers who all sell their own brand of the same heroin. Victor's is called Empire. The rather uneasy truce is kept in place mainly because the rival dealers all get their drugs from the same supplier, the drug kingpin La Colombiana (Rossellini). He has a good life though. He and his friends are having a good time, he has a great girlfriend, Carmen (Cotto), and most importantly, he's making a lot of money. That's the most important thing to Victor - making money, and he's got a lot.

Enter Carmen's friend, Trish (Richards). Keen to meet her friend's boyfriend, she invites them both to a lavish party hosted by her own boyfriend, Jack (Sarsgaard), a Wall Street investment banker. Victor and Jack hit it off pretty much as soon as they meet and, despite being from completely different worlds, they soon become friends. Desperate to avoid the fate suffered by his now-deceased older brother, and immediately interested in Jack's promises of easy money, Victor decides to try going straight and is soon investing some of his vast reserves in his new friend's schemes while seemingly turning his back on his friends. But will be able to see past his greed, and more importantly, can he trust Jack?

I didn't read the back of Empire's case before watching it so I had no idea even what genre the film was nevermind the basic story, and as I mentioned, I wasn't really expecting a great deal from it either. Yes, John Leguizamo is generally pretty good value but no one's infallible. As it turns out though, I needn't have been so cautious about watching it as it's actually pretty damn good! Leguizamo dominates the screentime as you might expect and makes a reasonably convincing dealer. Victor isn't big but he's smart and he knows how to survive on the tough streets of the Bronx and even when things start to go wrong, he never doubts himself. Sarsgaard is also good as the equally smart financial wizard, as is Cotto as Victor's girlfriend.

Everyone else earns their money well enough without really wowwing you, although rapper, Fat Joe, is amusing as rival dealer, Tito, who can't even be bothered to get off his ass for a gunfight! I may not have paid much for Empire but it's a surprisingly enjoyable film which I wouldn't have been annoyed to have paid full-price for. It's set in a realistic world with a believable story and characters and remains pretty gripping throughout its run-time. Give it a try!