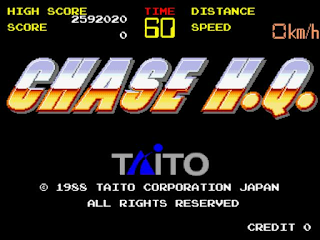 Before the days of polygons, it was pretty rare to find a decent driving game. Even in the arcades they were pretty rare. If you asked any gamers around my age to name their favourite, most would probably say OutRun, and with good reason - it was a revolutionary game that made a huge impact. There was a few other good examples from around that time as well though, and one was Chase HQ. This effort from the awesome Taito was clearly influenced by OutRun - what else wasn't in the years after its release? - but it's not just a shameless rip-off, no sir. Whilst the basic gameplay has shades of Sega's classic, Taito also injected it with themes taken from some of the American buddy cop movies and TV shows which were so popular at the time. It sure sounds like a perfect combination but how does it stand up today? 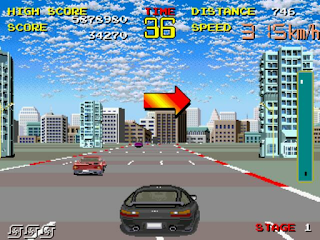 Taking on the role of police detective, Tony Gibson, it's your job to pursue one dangerous criminal on each of the game's five stages. They have all commandeered some sort of powerful sports car and are fleeing out of the unnamed city (which is probably LA), They have got a head-start too so you, along with your partner, Raymond Broady, need to move quickly to make up the lost ground. After a briefing from the lovely Nancy back at 'Chase Headquarters' you'll get sixty seconds to catch up with each felon in your black Porsche 928 Turbo. Once you've reached him, you'll get another sixty to smash his car up until they stop (they’re all men – women don’t commit crimes, remember)! Your ride is equipped with three helpful turbo boosts per stage/credit which can either be used to catch up with the 'con' quicker, or to smash into him more aggressively once you already have. 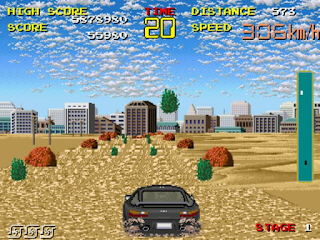 You're probably thinking that it sounds like a lot of fun, but you may also have thought that it sounds rather short. Well, you'd be right on both counts, but the latter point is pretty much the only bad thing about the game. Rather than attempting to craft a longer lasting, more subtle kind of driving game, Taito have instead gone for an intense ten minute blast of a game. It's not particularly difficult either but some replay value is added by the accumulative bonus you receive for passing each of the many civilian cars the roads are filled with without hitting them. Technically the game is a noticeable step up from OutRun too. The sprites are probably a little better and more varied and the game plays a bit faster, but the biggest improvement is in the stages themselves. 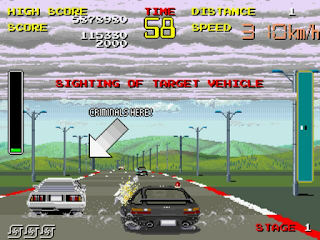 Rather than sticking to one backdrop each, the backgrounds and scenery here change numerous times per stage and are pretty varied too. The courses are also much less flat than OutRun's and each features a fork mid-way through with one route being longer than the other. The audio is also pretty half-decent. The music, whilst perfectable fine, could never hope to best Hiroshi Miyauchi's immortal tunes, and the effects are okay too, but Chase HQ's most noticeable addition is the speech. Your partner is pretty vocal throughout the game, willing you to drive faster and getting excited once battle commences, and good old Nancy has a fair bit to say for herself, both during the briefings and over the police radio during the game too. 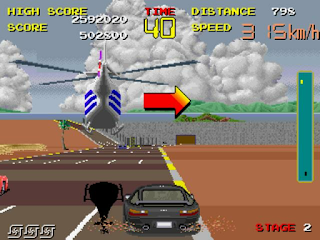 Such is the glorification of crime and violence these days, I'm confident that if this game was released today you would play the role of the criminal, most likely with the object not only to escape from the pursuing police officers but to kill them too, and bonus points scored for killing civilians too, or some such nonsense. As it is though, this is very much a 'good guys sim' and remains one of the most memorable cop games released. The combination of OutRun and cop film was a superb idea for a game and makes this play very differently to the former. It also creates a fantastic atmosphere and makes it a different enough game to stand proudly next to OutRun instead of in its shadow. It won't take you long to see all Chase HQ has to offer but it's such a fast, exciting rush of a game, you'll be back time and time again. A genuine classic.