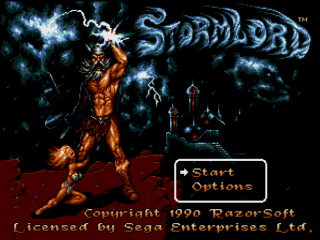 Censorship is a funny thing. Whether it's games or movies, it seems that it's fine to feature regular, gratuitous, and often unnecessary violence and gore, but as soon as there's some nudity? Well that's just plain evil. Only someone truly sick would want anything to do with that kind of thing. Even older games with limited visual prowess weren't safe. Indeed, for all its positive qualities, and there are a good few, Stormlord is still most well-known for the teeny bit of nudity it featured. Arriving first on the various home micros of the day courtesy of celebrated British coder, Raffaele Cecco, the game soon found its way to the MegaDrive too, but even with Sega's liberal censorship policies it was here that it met with the most controversy yet.

The game, you see, is a side-viewed arcade adventure set in an enchanted world known by the less enchanted name of 'The Realm'. It is here that the evil Queen Badh has trapped innocent fairies in spell-bubbles and it's up to you, as ancient warrior, Stormlord, to free them. The aforementioned controversy? The fairies were naked. That's it! The fact that they're really small and you couldn't even see their bits and pieces didn't stop Sega demanding that RazorSoft cover them up. Okay, there is also an occasional larger woman with a nipple peeking out but she's just part of the scenery and doesn't appear often. Stormlord is a pretty damn tough game though so I guess the less distractions the better!

The action is spread over ten gruelling levels and you have a set number of fairies to rescue on each (within a time limit) which are of course dotted around in mostly inconvenient places, often surrounded by traps, enemies, or both! Luckily Mr. Stormlord can contend with both. He is able to fire magic stars or, if you hold down the fire button for a second or so, a more powerful sword. Either of these will take care of most monsters easily enough which include wizards, dragons, goblins, caterpillars, bees, skeletons, and flying fiery things. Unfortunately the traps cannot be shot. These generally consist of plants of both man-eating and pod-spitting varieties, pits of fire, rain-clouds of death, fire-breathing dragon heads and more besides.

The levels, as well as featuring all this nastiness, are also home to a number of more helpful items. Most of these are found close to a specific obstacle you'll need them to pass, such as a keys and high-jump boots, to honey (attracts bees) and umbrellas (protect from evil rain). The only problem here is that you can only carry one item at once. Something else that helps you get around the different sections of each level is a friendly eagle. If you stand on the relevant stone pad, he will swoop down and carry you (by your head - ouch!) and drop you off elsewhere. You'll have to be careful when you use these though as they are often one-way trips, and that's the biggest problem with Stormlord. Progress through the levels involves a lot of trial and error and if you make the wrong move, you'll sometimes have to start all over again. Grrr!

It's also necessary to retrace your steps quite a bit here, which is part and parcel of arcade adventures really, but given this game's difficulty and the fact that the enemies respawn, this doesn't assist progress in the game much. Indeed, I had this game for my MegaDrive for many years and I could never get any further than the third level! That said, I did enjoy the game for the most part and its presentation is superb throughout. The soundtrack is fairly atmospheric and the effects are great (including an amusing wolf-whistle when you touch the woman-shaped scenery). The graphics meanwhile are well-defined and really nice while they last too, but there's not a huge amount of variety. While the level layouts do of course change substantially, getting increasingly harder and more complicated as you might expect, there's just two different sets of scenery graphics for example - the enchanted forest and the fiery castle you can see in the screenshots.

All of the sprites are very nicely drawn too (especially the sexy fairies - hee hee!) but feature very little in the way of animation, even Stormlord himself. His posture doesn't change when jumping or doing anything and he moves rather stiffly, even when he dies! If he suffers a glancing blow he'll just growl and carry on with the task at hand, but direct contact with any enemy or trap results in him crumbling to a pile of bones on the floor. Fortunately he controls nicely enough though, the game is hard enough without those kinds of problems! It's a real shame Stormlord is so tough too. It looks nice, has some good features, and I like its fantasy setting, it's just too difficult. Like me, you'll probably persevere for a while but when you're playing the same sections over and over again and still not even halfway through the game, you'll probably just give up.