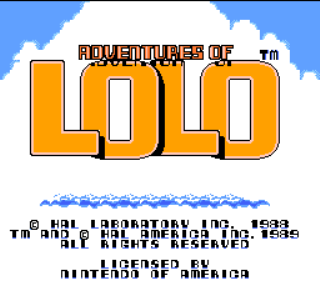 The gaming public is funny when it comes to game mascots. Some characters have a lot of work put into them only to fall at the first hurdle while others, seemingly created on the back of a stamp during a bored, day-dreaming doodle, become successful. Take Lolo, for example. He's a blue sphere with eyes, hands, and feet. That's it! And yet he, and the games in which he has starred, were big hits. Logically, the success of a game character would be down to the quality of the game rather than the character itself, but that's not always the case. Lolo has taken the lead role in around fifteen games so far, mostly on the Famicom and MSX systems. Many of these were only released in Japan where the series, known as the 'Eggerland' series, is most popular, but here I'll take a look at the first game of the series to be released outside Japan to see what Lolo has to offer.

A vast majority of game mascots were created to star in platform games and it is in this regard that Lolo is most obviously different. Adventures of Lolo, and indeed every game in the series, is in fact an overhead-viewed puzzle game where the object is to rescue Lolo's beloved, Princess Lala (a pink sphere, as you might've guessed), who has been kidnapped by the dastardly King Egger and locked up on the top floor of his castle. To reclaim his love, Lolo must make his way through 50 single-screened stages which are spread over ten floors of the castle, five per floor. To clear a stage, Lolo must collect the contents of the single treasure chest on each one to open the exit, but there is a problem - the chests are locked. To unlock them, he must collect all the Heart Framers. There are a number of these heart icons on each stage and they are of course progressively positioned in ever trickier places.

In addition to the hearts, the stages have a number of other features. Rocks, trees, and other obstacles can't be moved and are positioned in such a way as to provide the layout of the stage. Some stages also have stretches of water, sometimes with bridges or islands, and there are also Emerald Framers. These are blocks that can be pushed around freely (but not pulled) and can be used to free-up or block access to certain areas. They can also be used to shield you from attacks by some of the enemies of which there are several kinds. The first one you'll encounter is Snakey who doesn't really do much beyond get in the way. Others include Gol, Leeper, Alma, Medusa, Don Medusa, Skull, and Rocky. Some of them remain rooted to the spot, others can move around, some even chase you, but contact with many of them doesn't actually kill Lolo. Some of them, however, such as the Gols and Medusas can shoot him with their projectiles while others can trap him in corners.

Luckily, Lolo is afforded some degree of protection from these terrible beasts by way of the Heart Framers. Some of them will furnish him with magic shots. Shooting an enemy once will, for some reason, turn it into an egg. These can be pushed around like Emerald Framers and can even be pushed into some watery areas to provide a temporary bridge. Shooting an enemy twice will see it off altogether. In either case the monster will soon regenerate but it's often necessary to shoot them just to get them out of the way! The stages also sometimes feature different surfaces such as sand, which slows Lolo down, or grass, which enemies cannot walk on, and arrow blocks across which Lolo can only pass in the direction they're showing. Lolo can also use a hammer to break a rock, place a one-tile-sized bridge, or change the direction of an arrow block, but these three abilities are only available if he has collected enough hearts.

There may be quite a bit to it but Adventures of Lolo is still a pretty simple game at its heart and that extends to Lolo himself. Despite being little more than a blue sphere, he's an endearing chap and controls very nicely. The stages are not timed either so you can take your time working out how to solve each one. It is possible to mess up a stage beyond repair, by wrongly moving a block into a corner for example, but you can restart a stage (by killing Lolo!) whenever you want. Graphically things are very appealing. The single-screen stages don't vary a great deal and the sprites aren't amazingly animated but everything is nicely drawn and neat and tidy, and the music is great and very catchy too. Just about the only negative about Adventures of Lolo is that much of the gameplay is trial and error-based. Hal have done their best to lessen its effect though. The difficulty curve is very gradual so you'll at least be able to get a decent way into the game before you start to encounter problems, and each stage has its own password too, as well as the aforementioned 'suicide button' so you'll keep coming back to try again. Nice, innocent, relaxing, addictive fun!