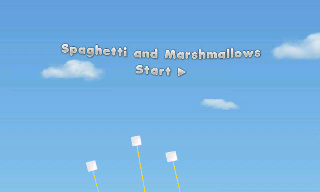 Spaghetti is pretty lush and everyone know marshmallows are supreme, but a game based on them? Yumm! I discovered this quirky little game totally by accident recently (when looking for Angry Birds updates, of course) but it seemed pretty interesting so I gave it a shot. But how an earth can you make a game about spaghetti and marshmallows? Well, I'm glad you asked. The game, you see, takes place on a small 2D landscape. Somewhere in the sky are target rings in which you must place a marshmallow. These are placed simply by touching a spot on the screen, but if you try to place one in a target ring straight away it will fall to the floor. You know, gravity and stuff.

This is where the spaghetti comes into play. As you may have guessed by now, your objective is achieved by building structures to reach the target rings. You do this by pinning the marshmallows with the uncooked spaghettis until you can reach them. Successful placement of the required confections means progression to the next, more challenging stage of course, but the rules of physics are in full force here - build your structure unsafely and the spaghettis will break and it'll all come crashing down! The higher it goes the more the wind will affect it too. You also get a limited number of both spaghettis and marshmallows to use too, so some careful planning and trial and error is often required for success here.

After completing a stage, you get the option of continuing to build (for experimentation or practise) or you can enter an amusing 'Rampage Mode'. Here, instead of mere marshmallows, touching the screen will instead drop a larger, heavier block. If you've managed to build an exceptionally well-made structure it may hold out, but dropping one of these is far more likely to result in lots of snapping spaghettis and general carnage! After a few stages you'll start to encounter frogs too. These pesky anura are particularly keen on marshmallows and placing them too close to one of these hungry creatures will see it quickly eaten. Some later stages also feature balloons for building airborne structures!

Yes, I agree, it all sounds pretty crazy, and I guess it is, but it's great fun too. It's not the kind of game that you can use to fill the odd two minutes here and there while waiting for the microwave at work to cook your dinner or something. It takes longer than that to play, especially some of the later stages, although I suppose you can pause it resume later, but anyway, you get my point. It's not as instantly accessible as something like Angry Birds and isn't particularly varied, but that doesn't mean it's not deserving of your time. Available in 'lite' form, which is free and features 9 stages, or a reasonably-priced 'full' version with 43 stages, Spaghetti and Marshmallows is an original and entertaining game with practically unlimited ways of finishing each stage and is well worth trying.