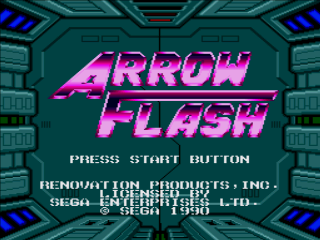 Poor old Earth, for such a small, insignificant little planet, it sure does attract a lot of attention from those pesky aliens, huh? In the case of this fairly early MD offering, it appears the objective is personal revenge rather than saving Humanity though. The attack force are known as the Zorgon V and they're after Dr. Schwinn's time travel project. After losing his wife to the vicious alien thugs, he began developing an attack fighter using advanced 'laser technology' and charges his daughter, Anna (who is a gorgeous, dark-haired vixen in the European release but a cute, blue-haired anime chick in the Japanese game, of course), into Zorgon V's complex to 'destroy everything in sight'. Fancy getting behind the controls of their prototype craft and helping the Schwinn's to get their revenge?

This is done over the course of five side-viewed stages which take place both in planetary atmospheres and in space. It's all pretty standard stuff too - lots of enemy ships of various shapes and sizes, some in formation, others all alone, end-of-stage boss fights, etc. There's not really anything that's staggeringly innovative here, but as we all know, that doesn't necessarily make for a bad game. Arrow Flash does offer two note-worthy features too. The first, whilst still hardly unique, is your attack fighter's ability to alternate between spaceship and mecha form. As you might expect, both of these forms have their own attack variations although there initially seems to be no difference between them (aside from their appearance).

Collectible icons are obtained by shooting certain types of enemy ships and include speed-ups, a shield, homing missiles, a Gradius-style 'option', and weapons upgrades. The latter comes in three types, imaginitively named I, II, and III. One is average in its fire-rate and and damage, two fires faster but is less powerful, and three is very powerful but fires slowly. Each can be powered up three times and, on a few occasions, a 'level' has a slightly different effect on the space ship than on the mecha. The ship always fires straight forward whilst the mecha can fire diagnally or behind, for example. The second noteworthy thing about Arrow Flash is in its title which refers to the game's equivalent of smart bombs. The spaceship form of your ship unleashes a volley of five powerful forward shots while the mecha is engulfed in a powerful energy field which renders it invulnerable for a moment.

The method you use to deploy these Arrow Flashes can be chosen in the options screen too - it's possible to have a limited stockpile which can be used instantly at the press of a button (and added to by collecting icons), or you can choose an unlimited supply of them which require charging, R-Type-stylee. This is probably the best thing about the game, actually. The Arrow Flashes are damn handy as you can imagine so the more of them available the better, but you often don't get time to charge one, so it can be a difficult choice, and a welcome dash of originality in an otherwise by-the-numbers shmup. In fact, it's not just unoriginal - so many things in this game reminded me of other (mostly better) games. Designs for some enemy sprites, bosses, even stages have been seemingly 'borrowed' from titles including Gradius, R-Type, and especially Thunder Force 3.

Actually, given the 'tributes' to Techno Soft's great here, it's a shame that Telenet didn't try to emulate the stunning graphics from that title too. Not that there's anything terribly wrong with the way Arrow Flash looks but it does lack the high level of detail and polish present in many other MD offerings. That said, there are some nice backgrounds here with parallax scrolling and some TF3-style wibbly effects, but the sprites and weapons effects are pretty average, the explosions are poor, and the enemy bullets change colour and move fast too so you often end up getting shot down without even reaslising you'd been shot at. The sound effects are also rather uninspriring but the music is actually pretty good (although not up to TF3 standards, or course, but what is?).

I remember seeing reviews of Arrow Flash in Mega Drive magazines of the day and it always got pretty average scores - I guess that's why I've never bothered to pick it up. Having now played the game, I can safely agree with Mean Machines and all the rest. The game's not bad to play and even with the hard-to-spot bullets it's not an overly taxing experience. The ship moves around the screen okay and there's no complaints about the collision-detection. Some of the bosses are pretty good too, it's just a shame Telenet felt the need to 'borrow' half of their ideas from others shmups - I'm sure if they'd put a bit more thought into it, Arrow Flash could've been a pretty damn good game. There's no game-ruining flaws here and nothing to give you nightmares - it just screams mediocre from every average-sized gunport.