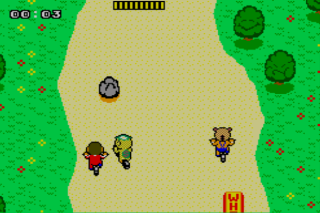 No, your eyes do not deceive you - it's another Alex Kidd game! While writing my recent Top Five Alex Kidd Games feature, I was as surprised as many of you will no doubt be to learn that Sega did in fact release a completely unheard-of game starring their mascot of the day! Unlike all the other games in the series, however, this one takes the form of an overhead racer which sees Alex racing through obstacle-strewn courses while other riders try to knock him off. Even slight contact with them, trackside objects like trees, or obstacles on the course such as rocks or fences, knocks him off his bike. He has an energy bar which is gradually depleted by knocks and when it's empty, it's game over. Upon discovering this game, I had intended to give it a good long play and write a full review but unfortunately it seems the game was made to be played with Sega's paddle control and as such is almost impossible to play via emulation. 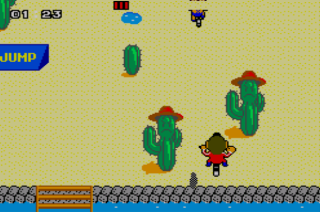 It's also difficult to really say what the object of the game, although perhaps if I could play if properly I might find out! Even with the horrible (and reversed!) controls afforded by my normal pad, I did make it as far as the second 'scene' though, and apparently there are a few more too. The first is Blackwood Forest (top screenshot) and after a while of racing you'll encounter a large pink exit (although you don't have to enter) which takes you to Cactus Desert (bottom screenshot). Scenes after this include South Seas, Pyramid River, and Radaxian (Alex's home). I had a lot of fun playing this, even with the restrictive controls and I'd love to play it properly, although this would require the purchase of a Japanese Sega Mark III console, paddle control, and of course the game, so it's not very likely! It's a shame too as, despite seeming a little aimless, this is still a very enjoyable game from what I could tell, with nice graphics and music too, which ironically is more entertaining than some of Alex's arcade adventures!