Yes, yes, okay, I know - there are only five Alex Kidd games, so how can this be a Top Five? Well, actually, contrary to popular belief, there are in fact six Alex Kidd games - Sega sneaked out another one which never left Japan, but I'll look at that one in a later feature. This feature, instead of selecting the five best Alex Kidd games, will place his five best-known adventures in order of greatness! 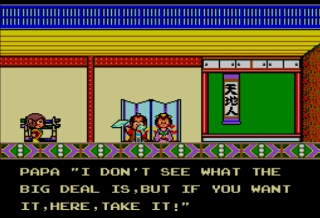 The well-informed among you could be forgiven for not considering this a true Alex Kidd game as it was actually nothing to do with him in its Japanese form, instead being based on some obscure anime show and being converted to an AK game for its overseas releases. It's also the game I was most intrigued by prior to this feature as my entire knowledge of it was pretty much restricted to a single screenshot and tiny review in some magazine of the day (C&VG's Complete Guide to Consoles, as I recall). As it turns out, that intrigue was somewhat misplaced, with the game focusing on Alex's attempts to find eight pieces of a map to a new arcade which has opened in town. Unlike the other games in the series, this takes the form of an arcade adventure which does involve lots of familiar platforming action but also sees Alex talking to other characters, searching furniture for items which he can use elsewhere, etc. It's not a bad game I suppose, but it's not a huge amount of fun and just seems like a bit of a chore at times. 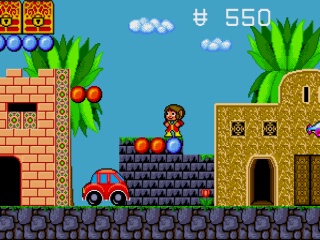 Commonly believed to be the final Alex Kidd game, Enchanted Castle was actually released shortly before Shinobi World, but it is the only one that didn't get a Master System release, instead appearing as a launch title for the MegaDrive. Despite some spruced-up visuals and music (only marginally though) this effort very much retains the feel of the MS games which is probably its biggest problem. The Master System is a great console but the significantly greater power of the MD gave Sega the opportunity to do a lot more with their character but sadly they didn't seize it. It's not bad and has some nice ideas but it's also very frustrating, with the merest touch from anything that moves causing instant death. Even for a launch game this was rather average but next to some of the MD's other platformers, it's a pretty poor effort. 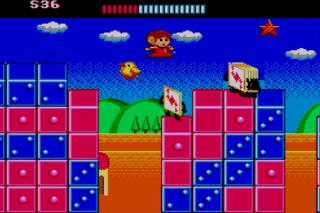 This was the first Alex Kidd game I played after I borrowed it from a friend many years ago. I swear I have firm memories of playing it through to completion over that weekend (yep, even with it making you go through the game twice, Ghouls 'n' Ghosts stylee) but since replaying it for this feature I'm not so sure my memory is accurate - it's harder than ten angry lions! It is also the most surreal of Alex's games, requiring him to traverse some strange landscapes and battle some stranger foes while trying to recover the twelve Zodiac signs! The object of each stage is simply to reach the end within the time limit. Enemies are just there to get in your way and contact with them takes a chunk out of your remaining time. I have good memories of this game which, while frustrating, is also addictive and features such obscure stages the urge to see what Sega dreamed up for the next one is strong! 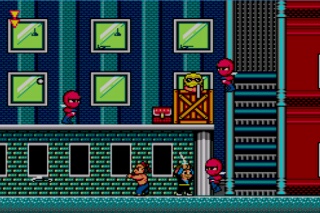 Cross-over games are few and far between on any console in my experience so that already makes this game noteworthy, but happily it's also rather good! I hadn't played it prior to this feature so I wasn't entirely sure what to expect, but as it turns out I needn't have thought so hard about it - it's quite literally a cartoony version of a Shinobi game with Alex Kidd replacing Joe Musashi. Clearly modelled on the MS version of the first game (it even features arranged versions of the same music), Alex must battle through twelve stages filled with enemy ninjas, soldiers, and bosses, all based on similar ones from Shinobi. Like High-Tech World, this game was not originally developed as an Alex Kidd game but the character suits it well and it's a superb final outing for ol' big ears. Ironically, it's also tougher than Shinobi, but the stages are interesting and well-designed so it's worth battling away. 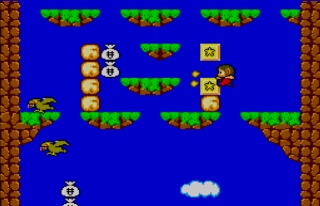 To my shame, I failed to fully embrace this game in the late 80's when my MS was my only console, despite its glowing reputation. I have since made up for lost time though, and can see why it was so revered. Miracle World is perhaps the most 'normal' of Alex's adventures but it's also the most enjoyable as you help him on his journey to free his brother and father who've been kidnapped by Janken the Great. This obviously involves lots of top platforming action but Alex also gets to go swimming and take command of a motorbike and a pedicoptor along the way too! This variety along with the lovely colourful graphics and nice music helps to make Miracle World a superbly entertaining game. It has pretty much always been regarded as the best in the series and although Shinobi World comes close, this is still the champion!
Posted by RetroKingSimon at 17:26