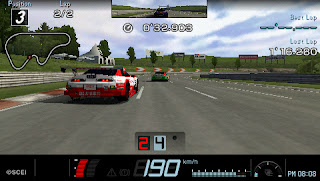 When a game gets delayed over and over again, it's rarely a good sign, so considering this game was first announced when the PSP itself was announced at the E3 show in 2004, it must've had some major problems! When it finally did appear five years later however, its name still carried a lot of weight, and after seeing it running I was sufficiently impressed to buy it. The thought of getting stuck into an extensive championship mode while on the train or hiding somewhere at work was an exciting prospect so I gleefully loaded the game into my PSP (which required the usual firmware update of course... *sigh*), and it was nowhere to be found! That's right, Gran Turismo for the PSP has no Gran Turismo mode! I honestly couldn't believe this so I looked into it, but sure enough - there is no such mode here, just arcade or multi-player. 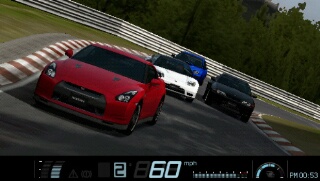 To say this was something of a disappointment would be a massive understatement - it's like buying a Kylie calendar only to find she's not posing in slutty underwear - what's the point?! There's been compromises in other areas too - fewer opponents, no car upgrades, etc. The game is an amazing achievement on the little PSP, there's no doubt of that - the graphics are stunning and virtually identical to GT4 on the PS2 - and it may well rank highly among the system's top racing games, but I never got over the crushing disappointment of what was missing rather than what was here and I returned it for a refund a week later. Unfair perhaps? Maybe, but what a let-down...