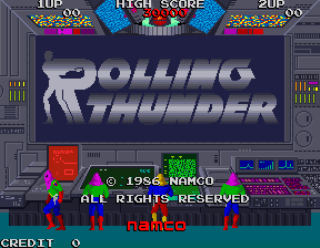 Good old women, you can always rely on them getting themselves into some sort of trouble, can't you! In the case of this mid-80's Namco classic it's Leila Blitz, an agent of Interpol's espionage unit, Rolling Thunder, who's gone and got herself abducted by a highly mysterious society called Geldra. Now it's down to you as Albatross, a fellow Rolling Thunder agent, to defeat Maboo, leader of Geldra, and rescue her before she's ravaged or something else equally dastardly. This involves making your way through ten stages filled with apparently infinite hooded 'Maskers' as well as several other kinds of enemies. The stages are all based in various parts of New York and are split into two groups of five - after you've completed the first five stages, they'll repeat but with more numerous and more aggressive enemies.

Our hero, Albatross, tackles all of these stages on foot and is initially armed with a simple pistol which can of course hold a highly unrealistic number of bullets, but they're not infinite. Many parts of the stages are multi-tiered and Albatross can leap up to and down from different floors (a nice idea later 'borrowed' by Shinobi), and he's often forced to by strategically-placed obstacles. Most of these sections feature doors and it is from these that many of the enemies originate. Handily, you can also enter the doors to hide from the hoodlums for a while too (not for too long though - you're on a pretty tight time limit!). Some of the doors will, upon entering them, award you with bonuses such as extra time, health, etc, and some appropriately marked ones will also top-up your bullet supply or award you with a machine-gun and relevant bullets which can also be topped-up.

A vast majority of the enemies are 'Maskers' who look like multi-coloured Klan members and it is the colour of their outfits that determines their strength and attack patterns. There are also several other kinds of enemies such as ape men, ninjas, and mutant bats and they can all cut Mr. Albatross' mission short in a hurry. He has a life-meter which is halved upon contact with an enemy but if he is hit by enemy fire, death will be instant. Most of the Maskers can shoot at you while others prefer to throw grenades, and some of them take more than one hit to put down. If you somehow manage to run out of bullets, you'll only be able to fire one (very slow) bullet at a time, but luckily ammunition is rarely scarce so you can generally pepper the screen with bullets wiping out lots of Geldra scum without concern. It's worth pointing out though, that the enemies regenerate and if you were to stand still there would be an endless stream of them wandering onto the screen so it's best to keep moving!

I have some great memories of this game. I spent a lot of time playing the Speccy version after receiving it as part of the Giants compilation but I always found it pretty tough going and I don't think I progressed much further than the second or third stage! I was therefore pretty surprised to find that this arcade original is actually a little easier! It plays superbly too - Albatross controls well with his movements flowing together nicely. You'll need fast reflexes to do well here but there's rarely a death that isn't your own fault (although it's annoying that you can't fire while jumping). It is a little repetitive though - the graphics are nicely detailed (Albatross looks pretty cool!) and the music and effects are decent enough, but the basic stage design varies little, much like the enemies. It's definitely an addictive game though, with some great ideas (like the hiding antics!). Rolling Thunder is deservedly regarded as a classic but it has aged a bit now. That said, it remains a very enjoyable, fast-paced platform shooter with a great atmosphere throughout.