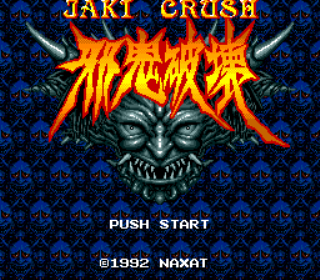 To be honest it was probably a bit of a niche franchise, but most gamers who actually played any installments in the great Crush series ended up loving them. However, even many fans believed the last game in the series was Dragon's Revenge on the MegaDrive which isn't even really a true Crush game anyway. Until fairly recently I also believed this to be the case but it seems Naxat pulled a sneaky move and released another final offering. This time they jumped ship to the SNES and the game never appeared outside of Japan either, which I guess would be why not many Western gamers have heard of it. It was a strange decision though, considering the success of particularly the first two games - another installment of crazy, supernatural pinball action would've gone down a treat! Then again, if the game continued the downward spiral started by Revenge, perhaps it was best left in Japan...

As you might expect, the game is once again themed, this time surrounding the mythology of a type of Japanese demon called a Jaki. This means you're likely to find some of the same things here as in Devil's Crush, such as dragon's, bats, medieval soldiers, etc. Luckily, Naxat have also ignored the supposed innovations offered by Tengen with their unofficial sequel, Dragon's Revenge, and retained the format so successful with their own demonic prequel. To that end, the main table is again three screens high and similar in design to that in Devil's Crush, particularly the bottom and top sections. The former again features pods or cocoons of some sort above the flippers (I think they're animal corpses actually!) and a dragon-like creature near the top, and the latter features small goblin-like creatures that circle a larger demon of some sort, and there are various other ogres and monsters around the edge of the section.

Unlike the previous game, however, the middle section of the table is largely featureless here, comprising of little more than one flipper on each side at differing heights, presumably placed to make progress to the top section easier which makes the positioning of a tower between its flippers rather inexplicable! The table is well-made though, and feels familiar enough, and it is of course again home to a huge number of bonuses and secret ways to amass higher scores including, as always, the bonus tables! As with the prequel there are six here and they are pretty creative! One is reminiscent of the wibbly fire level from Thunder Force 3, another features a big, scary face over which a scenario similar to Space Invaders plays out, only with a pinball rather than a laser! This latest Crush game also features one of the few things that Devil's did not, and something I sometimes found myself missing - multi-ball!

Yep, if you thought Crush games were great with one ball, try with two! The only problem with this is that the scrolling only follows the original ball meaning you can sometimes lose track of the other, but it's still a more than welcome addition. There are a few little niggles with the table design though. The ball doesn't feel quite as weighty here and doesn't ping around the table as quickly and chaotically, and the surface of the table seems a little emptier than that of Devil's which was awash with creatures and medieval soldiers of various types. It can also be harder to access this table's more interesting features too. For example, the bottom section of the table features three small purple creatures which place a blocker between the flippers when they're destroyed. This might sound like a good idea but it can end up meaning long but low-scoring sessions. It's also a much quieter game. One of the things I loved about Devil's was the loud, rocking music and constant, even louder sound effects which added to the atmosphere superbly.

There's still plenty to do here though and overall Jaki Crush is a fantastic addition to this great series featuring superb presentation. The graphics are top-notch throughout, especially the bonus tables which it's well worth the effort to visit, and even make (limited) use of Mode 7 trickery and the physics are still, as usual, near-faultless. The music is good too and suits the game's chosen theme well. As you may have gathered by now, Jaki isn't quite as good as Devil's - near enough everything here is slightly inferior - but it certainly comes the closest yet to finally besting the great!