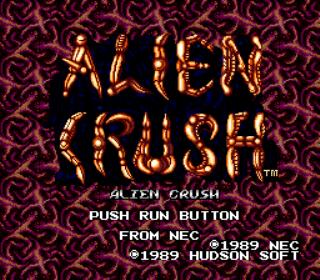 Pinball has diminished in popularity a great deal since the advent of videogames, and pintables are now rarely seen anywhere but decent sized arcades and specialist retro establishments, but thanks to the entertainment medium that saw their demise, they can continue to live on! Which brings me, in a typically long-winded RKS stylee, to Alien Crush. I’m a bit of a pinball fan and I frequently venture into my local pizza restaurant, which is the only place for miles that still has any pintables, but pinball videogames, in my view, too often tried to accurately emulate proper pintables rather than taking advantage of the fact that they are no longer governed by the sometimes-restrictive rules of pintables. That is until Alien Crush came along.

Released by Naxat Soft exclusively on the PC Engine, Alien Crush is an original, not to mention supremely playable pinball game that would be completely impossible for an actual pintable to replicate. Its table, you see, is viewed from an overhead perspective, is two screens tall, and is awash with many scary alien creatures and devices! The bottom section of the table is dominated by a large alien creature with many eyes (which looks like the queen from the awesome ‘Aliens’ movie). All around it are various smaller aliens poking their heads out and insect-like creatures scurrying across the table occasionally, tempting you to destroy them before they scamper away, and further down the table on either side of the flippers are two cocoon things that act like bumpers, but if you hit them enough times they will open setting loose the evil monsters within!

The top section of the table has two main features. In the top-left is a brain, which doesn’t really do much besides flash every time the ball hits it, but if you can get the ball right around the side and top of it, a blocker will appear between the flippers. The brain also opens up occasionally to unleash some horrific alien beasts. On the right of the screen is what appears to be a large mollusc or squid-type alien, into which you can also shoot the ball for points. Between these two objects at the top of the screen are three vertical dividers. Passing the ball through them turns lights on and off, and below them are three bumpers whose positions are determined by a mystical eye at the side of the screen. There are of course further aliens abound here too, to further complicate matters!

The last feature of note in Alien Crush is the existence of several bonus tables. These can be reached by shooting the ball into one of the pockets situated around the table, which are usually aliens mouths or something, when the arrow pointing at them is lit. The bonus tables are all one screen in size and the object of them is generally to destroy all the aliens that reside on them. There is one that’s devoid of aliens, however, and they are replaced by lots of bumpers arranged in various positions. It is of course possible to amass considerable points on these tables, but, as every pinball connoisseur should know, everything on a pintable does something, and there are countless ways to amass huge scores on the main table too.

Graphically, the game is a real treat, especially considering this was an early Engine game. I think it’s safe to say that the Alien movies were something of an inspiration for the visuals this game, though! Still, if you’re going to be influenced by things, it might as well be the best things, right? The sound, too, is decent enough. There's the choice of two tunes before playing - Lunar Eclipse and the splendidly-named Demons Undulate, and the sound effects are suitably befitting of the game's style. Gameplay-wise, there's not really much more you could ask for. As with any pinball game, the most important thing is the ball physics, and happily that's top-notch here. Movement around the table is reliable and impact with enemy sprites is rarely too unforgiving. There's even a 'tilt' option for added realism! As you might expect, this is an awesome game for 'score attacks' too. New ways of achieving bonus points are seemingly discovered every game - I’m still finding new tricks and devising new techniques all the time! Overall, yes, some could argue that Alien Crush has been superceded now (by its own sequel, for one!) but it still plays a pretty mean game of pinball and is well worth a bash.