It has long been my intention to cover entire game series' from start to finish here, in addition to odd games, so to satisfy my own curiosity I thought I'd start with this classic and much heralded series of shooters. Pretty much all Mega Drive fans are already more than familiar with the series, no doubt, with the second game being one of the better launch titles for the console here in the UK, and the stonking third and fourth games remaining particularly popular among shoot 'em up fans, but what of the original game from which the others evolved? Before the days of the internet it was a complete mystery to me; I had heard many conflicting rumours but no definitive details and had certainly seen no screen shots, so solving this mystery seemed like a great place to start my humble blog. 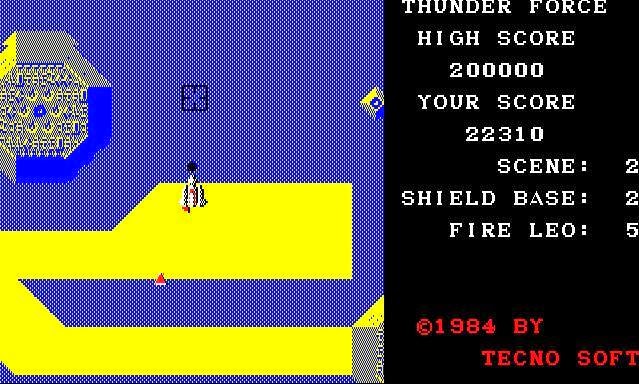 Soon after setting out to answer this question, I started to regret it! The original Thunder Force, you see, was, as far as I can tell, only released on a selection of obscure (to Westerners) Japanese 8-bit micros like the Sharp X1, Fujitsu FM-7, NEC PC-88, NEC PC-98, etc. Being a Japanese game, this is understandable. The big problem, however, is the apparent difficulty in emulating these systems! Luckily for me, the Spectrum, Commodore 64, Amstrad CPC, and other popular micros from my youth are easy and painless to emulate, but the same cannot be said of the Japanese micros! After many hours of searching the 'net and messing around with my PC, I was still no closer to finally playing the elusive Thunder Force! 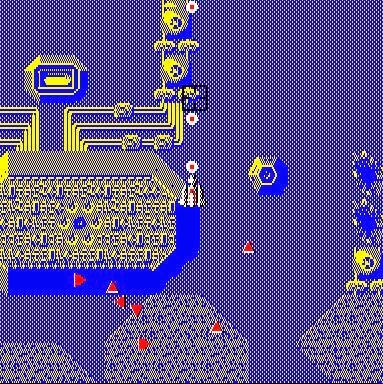 Fortunately, help was at hand. A kind and helpful user of the Retro Gamer forum called Oli_Lar, who apparently has a great deal more experience with these systems than me, was able to provide me with emulators and roms for both the PC-88 and PC-98 versions of Thunder Force. So, thanks to him, I was finally ready to see a game I had often wondered about.

Not only did playing this mysterious old game represent my very first experience of an NEC PC-88, but of any Japanese computer at all! So I had no idea what I should expect. If this game is anything to go by, first impressions of the PC-88 are that it's somewhat akin to our very own ZX Spectrum. Which is no bad thing. The title screen is very basic, featuring the title over a scrolling landscape from the game. In-game graphics, on the first stage at least, consist of blue and yellow monochrome, with a few extra colours used for smaller things like alien ships and bullets, but are nicely detailed and feature little in the way of clash.

Audio treats, however, are almost non-existent. A few little twinkle noises indicate explosions, and that's about it from what I saw (or heard). The game's antoganists are the same as in the subsequent games in the series, namely the evil ORN Empire. In this iteration, they have been up to no good building an asteroid fortress, the Dyradeizer, with which to oppose the heroic Galaxy Federation. It's your job to take a specially designed fighter, named the Fire Leo, and disable Dyradeizer's shield generators and destroy it. Sounds simple enough, right?

Although now known exclusively as a horizontally-scrolling shooter series, the Thunder Force games didn't start out like that. Sure, TF2 featured both overhead and side-viewed levels, but for some reason the overhead ones were dropped for subsequent games. This game, however, features overhead levels exclusively. The looping landscape is free-roaming, and scattered liberally over it are a large number of gun emplacements. Luckily, your ship is equipped with bombs to destroy these with, as well as a standard forward shot for taking out the periodic airbourne enemies. Hidden under random ground-based guns are two shield generators. Destroying these with a well-placed bomb disables the Dyradeizer's invisibility cloak enabling you to give it a good kicking until you move onto the next stage to repeat the process.

That's about it as far as the game itself is concerned. It's not a complicated game but it must've been pretty original back in 1984. There were a few games of a similar style around, such as Xevious, but Thunder Force has a few ideas of its own. Once you get the hang of things, it's very enjoyable and really addictive, but it's also really tough going. I must've played it 20-30 times straight and the best I managed was stage two, and yet there are apparently 32 stages (or 'scenes')!

The emphasis, as far as I played at least, is very much on the bombing of ground targets, the enemy ships buzzing around are seemingly there only to hinder your progress. When you first start playing, you'll likely lose a life for every target you destroy, but you'll soon develop a few techniques to prolong your game, although the fact that you start with ten lives doesn't hurt! It would be interesting to see the later levels, but judging by the difficulty increase between stages one and two alone, that seems unlikely for now! I'll keep trying though... 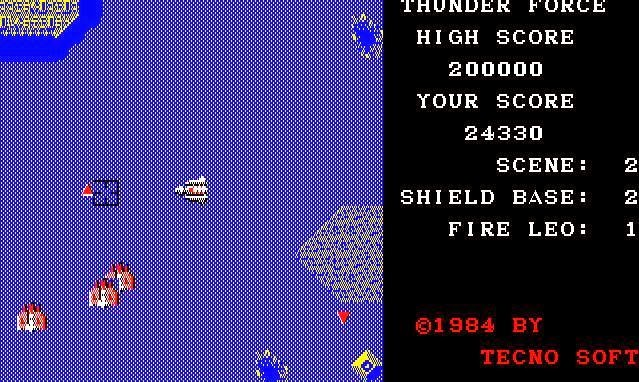 Thunder Force 2 was one of the first 16-bit games I ever played. I really liked it and enjoyed the variety of overhead and side-viewed levels, but I've wondered for years what the original Thunder Force would be like. I suppose I never really thought I'd actually get to play it, even via emulation, but I'm glad I did. The Thunder Force series is a great one and I'm glad to finally see where they came from. Overall, this is a really enjoyable, albeit super-difficult game, and one that I'm sure I'll return to in the future. Not sure that'll make much difference though! It's difficult for me to give a rating to this game, being the only game on its host system, or indeed any similar systems, I've played so far. It's really enjoyable (the first stage, at least!), but also really tough, so I think: