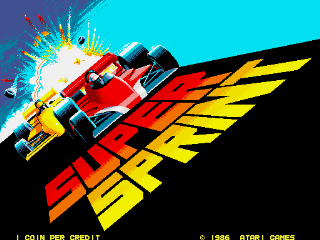 The overhead viewed racing game certainly didn't start with Super Sprint - the genre goes right back to the ancient pre-microprocessor, black and white games of the 70's - but it does share their lineage and today remains possibly the most fondly remembered example of this all but dead genre. In the eighties and early nineties, there were a lot of these games around. Some were variations on Super Sprint, such as Super Off Road, others experimented with games that only showed a small part of the course at once, such as Motoroader for the PC Engine and, of course, the popular Micro Machines series which required lightning reactions by the player, and there were some which were viewed from an isometric viewpoint like Rock 'n' Roll Racing for the SNES.

All of these variations on the original blueprint were exciting and good fun, esepcially in multi-player, and I'll be looking at some of them later in this series of features, but it's Super Sprint and its pseudo-sequel, Championship Sprint, that old timers like me most fondly recall. There can't be too many people that don't know all about Super Sprint, and there's not really too much that you can say about it. It was a simple game, even compared to others of the time. It's based on either Formula One or Indy/Cart racing (probably the latter considering how unpopular F1 is in the US) and can be played by between one and three players simultaneously, whilst a fourth 'drone' car is controlled by the computer. This was before the days of linking machines together of course, so this is achieved by presenting each course in its entirety from an overhead perspective.

The races are contested over four laps by four cars regardless of how many human players there are. If there are less than three players, the remaining places are taken by additional drone cars. Though there are only a mere eight courses, the competition can go on for as long as the player(s) like, since the courses just keep repeating over and over again. The object is obviously to finish in as high a position as possible, but only the first three positions score points; the higher the position, the more points are awarded, but if you finish fourth, you'll soon have to insert (giggity) more coins. As can be seen from the screenshots, each of the courses feature a wide track, and they pretty much fill the screen. Since the whole course has to be shown at once, however, there are lots of bridges and sharp corners (including some 180 degree, and even a few 270 degree turns!).

There are also a few features that are not exactly common on F1-style circuits. Some of them hinder your progress such as jumps (if you fluff it, at least!), tornadoes (which make your car spin around if you drive near them), and pools of oil (which do something similar whilst also making a weird noise), and some are there to help you like short cuts, various bonus points, gold wrenches and gates. Not all courses have gates but when they are present, they allow you to take further short-cuts. Beware though - the gates aren't always open - they open and close in regular patterns (and often seem to favour the computer-controlled cars, if you can believe it). If you head towards one at high speed and it closes just as you get there, you often can't avoid it in time and........ BOOOOOM!

When you start the game you don't get to choose which car you want to drive as they're all identical (except their colour), but every time you pick up three gold wrenches, you can choose one of four upgrades. Three of them - higher top speed, turbo acceleration, and super traction - can only be chosen up to five times each, but the other, which gives you bonus points, can be selected as often as you like. Be careful if you upgrade your speed too much though, as hitting a wall too fast will result in your car exploding. A replacement is soon 'choppered' in enabling you to continue on your way, but it all takes time. It's also possible to make the others cars crash by driving into them and knocking them into the wall, but, perhaps unsurprisingly, they can also do this do your car (and frequently try).

As mentioned previously, Super Sprint was a pretty simplistic game, even back in 1986. There are precious few sounds with little music (including none in-game) and a few weak effects and, while the colours are bold and the title and presentation screens are nice enough, the graphics aren't particularly impressive either. The courses all look identical (aside from their layout, obviously), the cars and other objects are all small and not especially detailed, and animation is almost completely absent. As most gamers already know, however, this is one of those games that doesn't need flashy or detailed graphics to be playable! Even much more modern variations on the theme don't usually look particularly great - playability is all that counts here, and fortunately Super Sprint has that by the bucket-load.

The secret is the cars which handle very precisely and have tight and quick turning circles. In fact, since the track is mostly very wide (compared to the tiny cars) it's very easy to turn too sharply and end up driving backwards or something! This just adds to the fun when racing against friends though, and is rarely annoying. What is a little annoying, however, is something that's commonly annoying in racing games - the computer-controlled cars. They're rather inconsistent in their performance and are 'magically' unaffected by the hazards present on each circuit, like the tornados, but this was always intended as a multi-player game anyway. The courses are nicely designed for the most part though, and are varied enough in their layout to keep things interesting too. 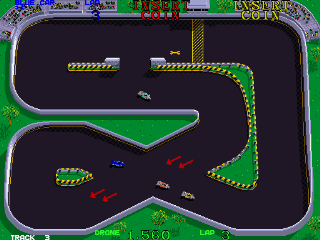 Racing/driving games are among the most enjoyable multi-player games there are today. The strong sense of competition, not to mention the ability to fight dirty by making your friends crash, have helped to prolong the lifespan of many games that would otherwise have started gathering dust long before, and this game proves that this has been the case for almost as long as there has been videogames. They may have changed quite dramatically over the ensuing years, particularly as far as their appearance, complexity, and realism is concerned, but their roots run deep, so to speak. Super Sprint may be almost 25 years old but it has stood the test of time better than many much newer titles.