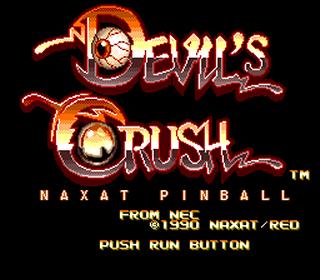 If you cast your mind back to the first time you noticed pinball videogames, there's a good chance you'd think of this game. Digital Illusions had some success in the early 90's with the realistic but playable Pinball Dreams and Pinball Fantasies, and sure, Alien Crush was popular, but it was this sequel, which arrived approximately two years later, which really got the genre noticed among the console gaming fraternity. Brought to us by Naxat again, the basic premise is obviously very similar to before. Instead of the evil aliens from the first game, however, this game is based, perhaps somewhat controversially, on the occult! The main table, for there is only one again, is three screens high this time, medieval themed, and is crawling with hordes of satanic demons, dragons, and monsters beyond description!

As before, each section of the main table has its own flippers and is home to its own features. The bottom section, for example, is home to a large skull (who mocks you by laughing every time you lose a ball!), a fire-breathing dragon, a tower, which gives you a blocker if you get the ball through its gate, and several other features. The middle section is dominated by a woman's face, which the ball can enter for bonus points, and it also gradually mutates into a dragon every time the ball enters a pocket! The top section features a rotating pentagram with eight sorcerers standing around it, and looming over them is the Dragon's Gate (a large skeletal demon thingy). All sections of the table are also populated by various bugs, soldiers, and scary creatures who wander around helping your score multiplier increase as you destroy them with the ball.

Devil's Crush, like its prequel, again features bonus tables too - six this time - and the main table is festooned with pockets through which you can enter them (when the pocket is open). On each of the bonus tables, the object is to take out the evil creatures that dwell within. These range from large dragons, skeletal heads, undead knights, and all manner of smaller, but equally malevolent foes. The only way to end this game it to max out the score counter, which, if you can manage it, would be 999,999,990! It's not as impossible to achieve as you might initially think though, for if you thought there was a lot to do in Alien Crush, then you've not seen anything yet! There are even more ways to increase your score here, including various tricks, secrets, and all sorts of ways of increasing your multiplier. Not only that, but there's now a password option to resume play later too, so I think it's safe to say there's plenty to keep you occupied!

Graphically, the game is even more impressive than its predecessor. The dark, gothic, demonic theme is superbly presented here, with excellent definition of the sprites and backgrounds and great use of colours, which are nicely contrasted. The table and monsters are mostly dull greys and browns compared with bright reds and greens for the explosions and various flashing lights. There's far more happening at once than there was in Alien Crush, too. There's a near-constant stream of evil beasts of some sort wandering around and they look suitably demonic, though their animation still isn't particularly impressive. The table itself appears to be based around an ancient castle of some sort, compared to the sci-fi inspired, organic appearance of Alien Crush's, and looks very much like the kind of place evil is likely to dwell. All this is supplemented by a fantastic soundtrack featuring a mixture of fast, rock tracks and moody, mysterious sounding tunes. Add to this the great, loud, arcadey sound effects, and your ears will thank you for playing this!

Gameplay-wise, like Alien Crush, not everyone will enjoy playing this, simply because it's pinball, but those who do play it will discover one of the most immediately entertaining games ever! This is without doubt the best pinball game I've ever played on a console or computer and even puts many actual pintables to shame, too! There is again an option to choose between fast and slow ball speeds and on fast, which should be everyone’s choice really, the ball can sometimes rocket around the table at awesome speeds – reactions are everything here. The ‘tilt’ option is also present once more, and ball physics and play mechanics are flawless too – this is a game that takes genuine skill and lots of practise to be proficient at. There’s a hell of lot of demons to keep you occupied (a near infinite number, in fact) and a great many targets to hit and objectives to meet, and the length of time you play for is more or less entirely dependent on your competence rather than your luck.

Most pinball videogames have tried to be authentic pintables rather than taking advantage of the limitless creative potential that computers and consoles offer. Alien Crush was the first to try something different, and Devil's Crush upped the ante ten-fold! Naxat have produced a frankly remarkable game here, and one that remains the definitive example of its genre, as well as one of RKS’s all-time favourite games. It’s as simple as pinball should be, but at the same time has so much more to it. This game should, theoretically, last you forever.