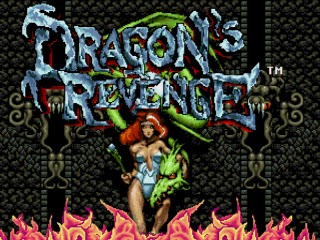 The emergence of the Crush series was a pleasant surprise for some but it wasn't until the MegaDrive (and Genesis) conversion of the second game, Devil's Crush (known here in the UK as Dragon's Fury), that the series became known to most Western gamers. Splendidly converted by TechnoSoft and published by Tengen, the latter apparently took the success of the game as an opportunity to create and publish their own sequel - Dragon's Revenge. Whilst not strictly speaking an official sequel, Dragon's Revenge duly takes the monstrous themes and ideas created in Alien Crush and perfected by Devil's Crush, and tries expanding on them in its own way. Was it successful?

The antagonist of this iteration is a villainous sorceress called Darzel who has captured the three dragon-slayers, Kragor the warrior, Flavia the female barbarian, and the good sorceress Rina. By the sounds of it they should be able to free themselves but alas, it's your job to rescue them, then help them to liberate the village of Kalfin's Keep, using 'magic balls'. In other words, pinballs! As with the prequels, the main table here is not attempting to emulate a real pintable - it's crawling with all manner of scary creatures which must be vanquished by hitting them with the pinball. The main table is again three screens high, but this time is also about two screens wide too and is even less like a traditional pintable than its forebears. It has several smaller sections tucked away in the sides and corners and the bonus/boss tables again return.

Visually, Dragon's Revenge seems to be something of a mix of Alien and Devil's Crush, though generally closer to the latter, especially with regards to the table surface which is straight out of Dragon's Fury. Some of the static graphics are really nicely drawn, such as the title screen and the bonus tables, but as far as the latter is concerned, Tengen seem to have camouflaged the fact that they are bonus tables so well, it's tough to see the ball nevermind work out what's going on, at least initially. There's probably a larger variety of sprites here and they're definitely more colourful, but overall it's lacking the character of its prequel in most areas. The music and sound effects are pretty average and much less 'in your face' and the ball doesn't feel so weighty as you ping it around the table. Talking of which, I think Tengen have tried to design a less orthodox table but it just doesn't play as well. In an attempt to add longevity and maintain interest, they've just made it overly complex, and yet despite that, it seems like every section of the table only has a couple of set places where you can fire the ball.

If someone has explained the premise behind one of the games in the Crush series before I'd played one, this is the kind of game I would've expected to end up playing. So that's good, right? Well, no. Unfortunately for Tengen, Naxat/TechnoSoft set the bar so high with Devil's Crush, this semi-sequel just seems mundane in comparison. It's difficult to really pinpoint why that is. It certainly doesn't have any major problems and plays nicely enough, there's just no point when you could be playing its prequel! It's not nearly as polished as Devil's Crush and is far less exciting to play - the gameplay just doesn't 'flow' as much and it feels more like a chore than a challenge. So, the first disappointment in the series so far, partly due to the amazing quality of the games before it. Not a disaster by any stretch of the imagination, but should've been better.