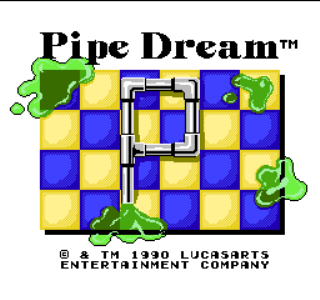 After the overwhelming worldwide success of Tetris, puzzle games were suddenly big business. The first major release I can remember after the Russian juggernaut had conquered all was Pipe Dream, or Pipe Mania as we know it here in the UK. Like most of the best puzzle games, it's such a simple concept it makes you wonder how someone didn't think of it earlier! Each level takes place on a grid spread over a single screen. From a starting point in the form of an open pipe somewhere round the grid, you must lay additional sections of pipe to create a pipeline. After a short amount of time, a liquid called 'flooze' starts to slowly pour into the pipeline. If the liquid reaches the open end before you have built the pipeline to a required minumum length, the game will be over.

The pieces of pipe you lay are each the size of one grid square and they appear one at a time in a random order. They include horizontal pieces, vertical pieces, corners, crossroads, and small reservoirs (which buy you a little time when the flooze is on its way!). Much like Tetris with its 'next piece' indicator, here you get to see the next five pipe pieces in the queue so you can plan ahead to some extent, but if you get any pipe pieces you don't want, you can dump them elsewhere on the grid. You'll get points for every piece of pipe you lay, and you can lay pieces on top of existing pieces (providing the flooze hasn't yet reached that piece), but you'll lose points for that. Any stray or unused pieces of pipe left upon completion of the level are also deducted from your score, however. As you advance through the stages the game gets harder by allowing you less time from the level start before the flooze starts to flow, and the flooze also flows faster and faster. Luckily you get three 'lives' represented by wrenches on the score panel.

As I said, Pipe Dream is a simple game, perhaps even more so than Tetris itself. You can choose between three catchy (but quickly irritating) tunes before play, and it has a suitably panic-inducing tune for when the flooze is nearing the end of the pipeline. It's a bit drab-looking, but games like this don't really need, and seldom receive fancy graphics. The hook games like this need is just that - an inherent addictive quality to keep you coming back, and Pipe Dream has it. It's great fun to play and with some practise you can create huge, grid-filling pipelines and rack up big scores. It's not the most addictive game I've ever played, and doesn't topple the mighty Tetris, but it's a great game to play for short bursts before you realise you've been playing it for hours!