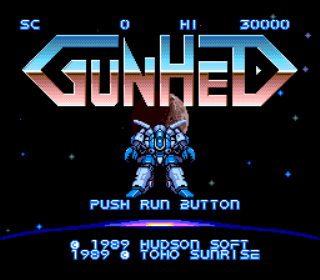 The late 80's was an exciting time to be a gamer. When the PC Engine was released, the early titles for it were like Holy Grails to most Westerners. Games that we could only gaze at longingly in C&VG and the like. One of the most tantalizing of these was Gunhed. Month after month we would read Julian Rignall and chums rave reviews and general hysterics regarding the new power-house console and for many it was torture. This was the time gamers realised that Japan was now getting the a lot of the best stuff first. For those gamers who couldn't afford to pick up one of the imported consoles and games that some companies were now offering (at inflated prices, of course), it would be a long time before any of these new games could be enjoyed. I finally got my PC Engine in the mid-90's and Gunhed was one of the first games I sought out for it. I'd waited a long time to sample the amazing game I'd been reading about. Was it worth the wait? 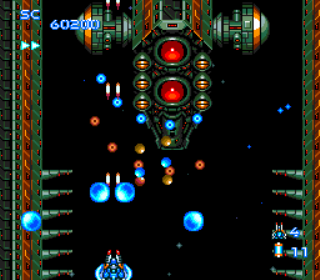 Before being a frenetic PC Engine shmup, Gunhed was also apparently a movie. Set in the year 2038 in and around some sort of post-war ruins where a renegade computer system, Kyron-5, is causing havoc. Luckily, one lone hero discovers a GUNHED (Gun UNit Heavy Elimination Device), a large 'mech' type device (of the sort our Japanese friends seem so keen on), which he restores to working order and must then pilot against the defences of the computer complex. On the surface at least, this takes the form of a fairly standard vertical-scrolling shmup. It's set over 9 stages or 'areas', some of which are set in space, others over planets (which must make the Kyron-5 'complex' as big as a solar systems!), and all are crawling with countless, highly varied enemies. Some of these are ground-based or scenery-mounted gun emplacements and the like but most are aircrafts or ships, and they range from small and fast to large and lumbering, but all are more than capable of taking you out! 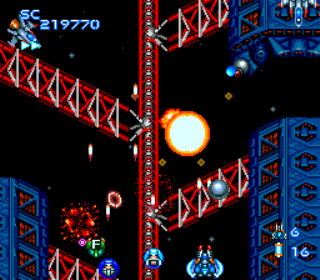 To combat this onslaught of evil you must use your 'Gunhed Star Fighter'. Luckily it can be powered-up as the near pea-shooter-level cannon it's initially equipped with is of little use. Even more luckily, the stages in Gunhed are awash with maybe the most frequent power-ups I've ever known in a shooter! Some enemy ships drop a numbered capsule which replaces your main weapon. Among them are huge, screen-covering lasers, homing lasers, multi-directional shots, and wave shots. There are also lettered capsules which grant your ship with a secondary power-up, These include shields, homing missiles, a drone type device called a 'Multibody', and 'Full Fire' - enhanced fire for your main weapon. Lastly and even more common are small, purple 'gel capsules' which increase the power level of any given weapon. 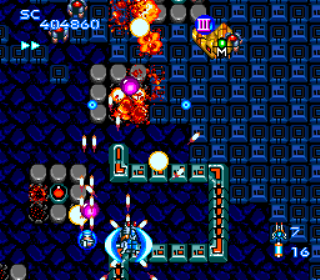 One of the reasons this game was so revered upon its release is down to its technical prowess. The fact it was co-developed by the designers of the PC Engine itself, Hudson Soft, goes some way to explaining this but it doesn't detract from the 'wow' factor this game exudes, particularly when you consider it was one of the earliest games for the system. The graphics are outstanding throughout with a large variety of sprites, both in size as well as design. They don't really have a lot of animation but there is often so many of them on the screen and the screen often scrolls so fast, it really is amazing that there's no slowdown or glitches of any kind. The sound is also of a high standard with some fantastic, memorable music, and some nice (if quiet) speech. 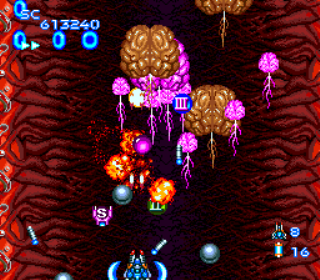 As any shmup fans knows, however, all the window dressing in the world doesn't necessarily make a game great, and excitement over being shown what a flashy new system is capable of can often conceal a game's design flaws. The fact that Gunhed is such a fantastic game, therefore, is testament further still to its greatness. Unlike a lot of shmups, however, especially the arcade ones which Gunhed mimics so well, this game eases you in slowly and the increase in difficulty is very gradual the further you get. As you might expect, things do get really tough towards the end of the game though, with all manner of aliens, guns, and lord knows what else, out to get you, but the sheer frequency of power-ups means this isn't one of those 'one-life' games where it's impossible to continue when you lose your power-ups. Just look at the screenshots here - every one except the first has at least one power-up capsule floating about! 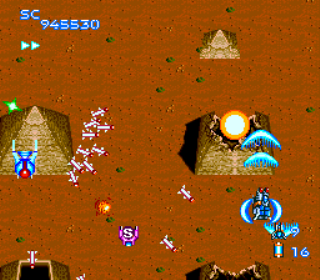 As mentioned, I was late to the party as far as this game is concerned, and yet not only did its visuals and music still impress when I finally played it, but even more apparent was how polished and arcade-like it was. The PC Engine was most famous for the quality of its arcade and arcade-style games, and it was titles like this that cemented that reputation. Admittedly I haven't played them all (yet) but Gunhed must surely rank as one of the best shmups on this system, possibly any system.